In brief call with Jewish groups, Trump condemns those who spread anti-Semitism 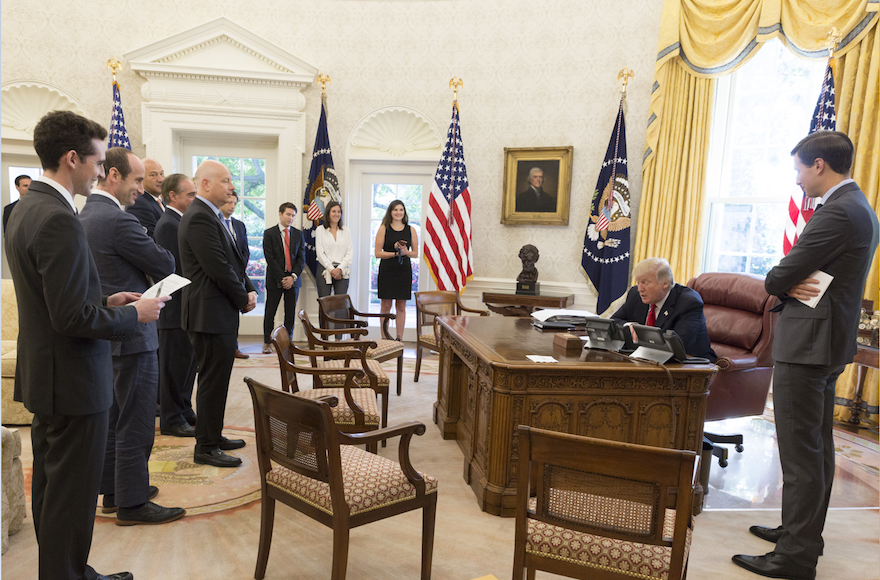 WASHINGTON (JTA) — The debate has gone on for weeks among rabbis and Jewish leaders: If President Donald Trump does not formally renounce white supremacists, is it still worth engaging in a conversation with him?

This was on much of the Jewish community’s mind since Aug. 23, when the leaders of three religious streams — Reconstructionist, Reform and Conservative — said they would not organize the annual pre-Rosh Hashanah call with the president, which the rabbinical groups had instituted at the start of the Obama administration. That call, principally for clergy, was aimed at helping to shape High Holidays sermons.

On Friday, Trump delivered his holiday greetings in a conference call with Jewish leaders that barely lasted eight minutes. He condemned those who spread anti-Semitism. He expressed his love for Israel. And he hoped for progress in the peace process.

He took no questions. By contrast, calls and meetings with past presidents have included exchanges — sometimes tough — and generally lasted at least 45 minutes.

Some of the participants expressed disappointment after having done public battle with the Reform, Reconstructionist and Conservative movements over whether one should engage Trump in conversation in the wake of his equivocations over white supremacists.

“Everyone would look less stupid if he had just put it on YouTube,” one said, encapsulating the one-way direction of the “conversation.”

But others said it was important that they take part, out of respect for the office and as part of their duty to represent a diverse community.

Not invited to join Friday’s call were the Reform and Reconstructionist movements. The Conservative movement did receive an invitation but Rabbi Julie Schonfeld, the CEO of its Rabbinical Assembly, declined to participate.

All the participants who spoke to JTA asked not to be identified because the call was off the record, although the White House released a transcript Friday afternoon.

Rabbi Avi Shafran, the director of public affairs for Agudath Israel, a haredi Orthodox group, had argued in a Forward op-ed Thursday that the rabbis who had opted out of the call with the president were missing an opportunity to raise the painful issue of the white supremacists and neo-Nazis who marched last month in Charlottesville, which culminated in an attack by an alleged white supremacist that killed one counterprotester and wounded at least 20 others.

“There is a difference between respectfully asking a president to clarify that he does not equate proponents of white supremacism with protesters against the same and, however one might feel about him, publicly and starkly insulting our nation’s duly elected national leader,” he said.

In the end, there were no surprises. Trump covered the standard range of issues in these calls and did not depart from the script.

Anti-Semitism and bias: “We forcefully condemn those who seek to incite anti-Semitism, or to spread any form of slander and hate — and I will ensure we protect Jewish communities, and all communities, that face threats to their safety,” he said.

Trump noted that his ambassador to the United Nations, Nikki Haley, was making a priority of keeping international bodies from singling out Israel for criticism.

“I can tell you on a personal basis, and I just left Israel recently, I love Israel,” he said.

Peace: “This next New Year also offers a new opportunity to seek peace between the Israelis and Palestinians, and I am very hopeful that we will see significant progress before the end of the year,” the president said. “Ambassador David Friedman, Jared [Kushner], Jason [Greenblatt], and the rest of my team are working very hard to achieve a peace agreement. I think it’s something that actually could happen.” Friedman is the ambassador to Israel, Kushner is his son-in-law and a top adviser, and Greenblatt is his top international negotiator.

Kushner, an observant Jew, opened the call by introducing the president, saying his father-in-law “takes great pride in having a Jewish daughter and Jewish grandchildren.” Ivanka Trump, Jared’s wife, is also a top adviser to her father. Trump closed the call by saying he and his wife, Melania, are wishing all “a sweet, healthy and peaceful new year.”

The controversy surrounding the call began last month, when the Reform, Reconstructionist and Conservative movements cast their decision to cancel the call — an outcome of Trump’s equivocation after the Charlottesville violence, when he said “many sides” were to blame for the violence, and that there were “very fine people” among the marchers protesting the removal of a Confederate statue and among the counterprotesters.

The rally was billed as a “Unite the Right” event meant to “to affirm the right of Southerners and white people to organize for their interests,” according to its Facebook page. It drew a range of groups largely representing white nationalism and white supremacism, as well as “neo-confederate” groups like the League of the South, who said they shared a “common enemy” with the hard-right marchers.

“The president’s words have given succor to those who advocate anti-Semitism, racism, and xenophobia,” the Jewish group’s joint statement said.

On Thursday, Trump again insisted that there was blame on both sides.

Those who participated in the call said that even absent a question-and-answer period, it was still better to be on the call than not.

“These are rabbis whose foremost cause should be the Jewish people and Israel,” said Morton Klein, the president of the Zionist Organization of America.

Klein, who was on the call, noted that he participated in similar calls and meetings with Obama, even though he rarely agreed with him.

“Why stupidly insult the president, who we need for those issues?” he asked.

Rabbi Jonah Dov Pesner, director of the Religious Action Center of Reform Judaism, said in an email to JTA that because he was not on the call, he had no comment on what was said.

But, he wrote, “We stand by our decision to not host a High Holy Days call with the President this year. We are disappointed that the President continues to draw a false equivalency between white supremacists and counter-demonstrators in Charlottesville.”