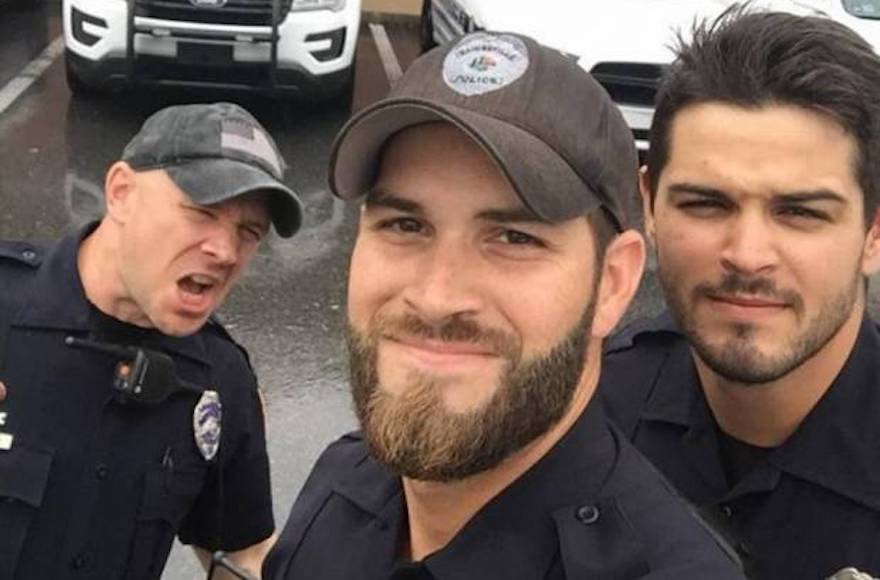 (JTA) — A Florida police officer has been suspended with pay after complaints that he posted anti-Semitic comments on his Facebook page.

A selfie of police officer Michael Hamill and two other Gainesville, Florida, police officers was posted a week ago on the department’s Facebook page, showing the officers helping the community in the wake of Hurricane Irma.

The photo received at least 181,000 comments, one calling the officers “hunkapotumuses,” and some 517,000 likes and 276,000 shares, the Gainesville Sun reported. Many online began referring to the officers as “hot cops.”

After the photo became popular on social media, several people sent screen shots of anti-Semitic posts by Hamil from 2011 and 2013, years before he joined the police force in 2016.

A post from April 2013 read: “Who knew that reading jewish jokes before I go to bed would not only make me feel better about myself but also help me to sleep better as well. Here is one for everybody, ‘What’s the difference between boy scouts and jews?” Anybody know? Well it is because ‘Boy scouts come back from their camps.'”

A post from 2011 said: “so I find it funny that people will talk about how our government needs to do something about our economy and in reality it’s YOU who needs to stop taking advantage of our system and get a life and do something with your life. Gotta love reality when it hits you in the face. Stupid people annoy me. Put them in an oven and deal with them the Hitler way. Haha.”

The Gainesville police said in a statement posted on its website: “Several citizens have brought information to our attention regarding complaints against Officer Michael Hamill. GPD takes these allegations extremely seriously. GPD is reviewing the allegations and will do so in accordance to Florida law and department policy. Under Florida Law, complaint information is confidential until an investigation is concluded. The Gainesville Police Department prides itself with our philosophy and mission of compassion, inclusion, and respect and will fully review the matter.”