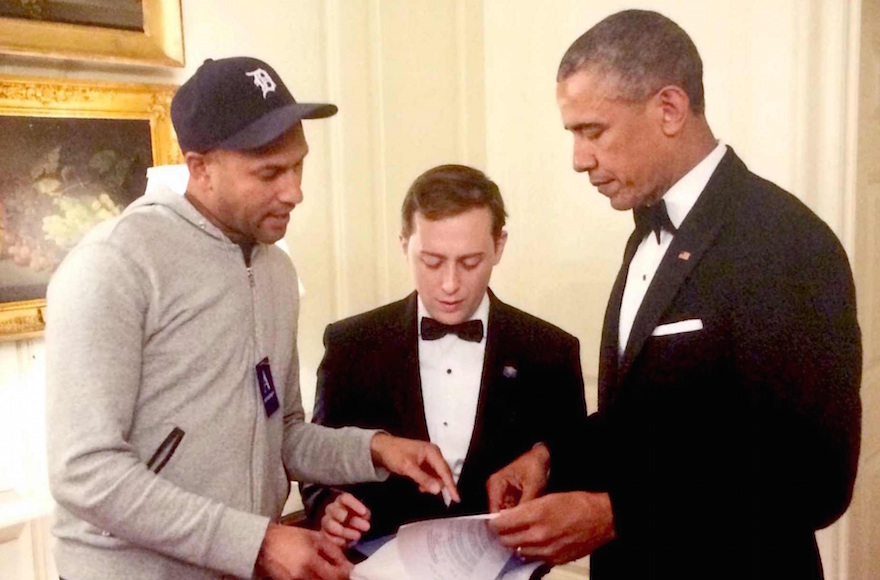 (JTA) — He was just 24, but speechwriter David Litt had already become President Barack Obama’s go-to guy for anything considered “kishke-related.” In Litt’s parlance, that meant he wrote the president’s speeches aiming to connect with Jewish Americans on a gut level — things like holiday and anniversary commemorations, but not, say, Israel or foreign policy.

That explains Litt’s presence one Friday night in the White House library in April 2012. A jet-lagged Obama had just returned from a trip to Asia and the last thing on his schedule was to record a video greeting for Passover.

“All right,” Obama said grumpily when he entered the room more than two hours late. “One take.”

The president got partly through Litt’s script before stopping at a line that mentioned how some in the past have tried to “destroy the Jewish people” in every generation.

“Isn’t that line kind of a downer?” the president asked. “What’s the deal? Like ‘Everyone’s out to get us, have some matzah.’”

As it happens, that’s exactly the deal, Litt remembers thinking. That memory — and many more — are recounted in his entertaining new memoir, “Thanks, Obama: My Hopey, Changey White House Years.”

The story continues with Obama — in a move that simultaneously awed and embarrassed the young staffer, the sting made all the worse because the president was operating on zero sleep — rewriting the line in about five minutes to “express the same idea, but in far more measured tones.”

“This, I thought, is why he gets to be the president,” Litt writes.

That is just one of many nerve-wracking moments from Litt’s White House tenure, which he began by writing speeches for senior adviser Valerie Jarrett and then White House Chief of Staff Bill Daley. He gradually worked his way up the speechwriting ladder, and toward the end of Obama’s first term he became a special assistant to the president.

Litt’s youth combined with his neurotic, Jewish sensibility — likely a product of his upbringing on New York’s Upper West Side — make “Thanks, Obama” an amusing read. The reader gets an inside look into some of the country’s most powerful people through the eyes of a rookie — one whose greatest worries include physically bumping into the president while walking through the White House halls or unintentionally starting an international crisis through a single misused word. (The former didn’t happen, but the latter nearly did: In one speech, he mistakenly led Obama to compare the dire situation in Syria to the far less dire one in Kenya.) 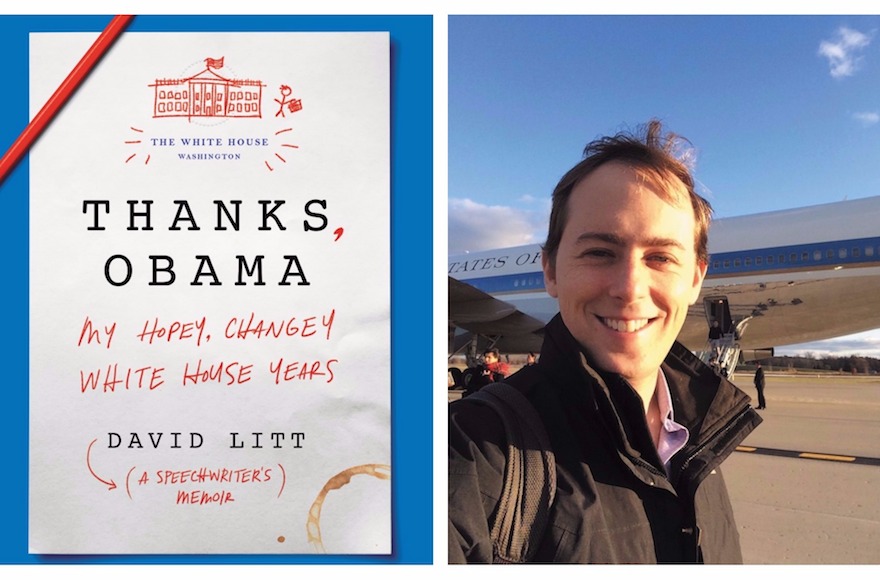 David Litt, seen in front of Air Force One, was only 24 when he started writing speeches for President Obama. (Courtesy of Litt/HarperCollins)

The book is equal parts Woody Allen, a millennial nerd’s diary and Aaron Sorkin (the creator and writer of “The West Wing,” a show Litt worships). The president comes across as the perfect foil to the young staffer — he’s the Dean Martin to Litt’s Jerry Lewis — partly because he is quite literally the most powerful person in the world and partly due to his legendarily calm and cool demeanor.

As the book begins, Litt is a recent Yale graduate and Obama zealot who goes to Ohio to work for the Democratic Party during the 2008 presidential campaign. The book follows Litt’s time in the White House, through the ups and downs of the rockiest years of Obama’s presidency, from low poll numbers to the shutdown of the government to the passing of the Affordable Care Act. As his joke suggestions — written for events like the White House correspondents’ dinner — impress Obama’s top speechwriters, Litt takes on more responsibilities as one of the team’s main comedic speechwriters.

Litt meets many of his idols and routinely experiences what he calls “life-changing” moments of triumph, but the job isn’t always glamorous. He becomes so stressed that he starts wearing a mouth guard at night to protect his constantly grinding teeth. It is a burnt-out Litt who leaves the job in early 2016, a little bored with his duties and frustrated with fact checkers who flag something trivial in seemingly every sentence he writes.

With his White House years behind him, Litt is far less stressed. He’s now a writer and producer for the comedy site Funny Or Die, which was co-founded by Will Ferrell in 2007.

“I’ve gone from wearing a suit every day to being sort of pleasantly surprised if it’s noon and I’ve remembered to put pants on,” Litt told JTA.

Funny Or Die’s content is frequently political in nature. Take the episode featuring Obama of “Between Two Ferns,” a satirical interview show hosted by Zack Galifinakis, which has been viewed nearly 22 million times.

The gig has allowed Litt to stay invested in politics while continuing to flex his comedy writing muscles. Funny Or Die has worked on videos recently with groups like the ACLU, Planned Parenthood and the League of Conservation Voters.

“The line between culture and politics is blurring pretty quickly,” Litt said. “We’re measuring the success of [our] comedy by how many people take action for a cause, and that’s not something that would’ve happened … even 10 years ago.”

Litt’s first big break was writing Obama’s speech for the Union for Reform Judaism’s 2011 Biennial conference, which was widely considered successful. (Haaretz ran the headline “Obama Speaks Jewish, Republicans Don’t.”) And while Jewish culture was Litt’s stock in trade while on the job, there were some unique challenges along the way — such as having to write multiple Hanukkah speeches. Obama’s official Hanukkah reception became so popular that by his second term, the White House decided to host two every year.

Since all of Obama’s remarks are transcribed for the public, Litt could not use the same speech twice, lest attendants at the second party think the president was phoning it in on a Jewish holiday.

While Litt never lost his sense of humor, the president’s Jewish cultural agenda was not all lighthearted, he said. Litt, who grew up keeping kosher at home and regularly attended services at Manhattan’s B’nai Jeshurun synagogue, strongly believes that Obama is genuinely interested in Jewish history and culture, and that Obama’s way of seeing the world (“always asking questions,” with a “real capacity for doubt”) was in line with Jewish tradition.

Litt said he often drew inspiration for his speeches from his own Jewish ancestors, many of whom courageously escaped pogroms in Russia to come to America. He wrote the speech that Obama gave in 2015 at the prominent Washington, D.C., synagogue Adas Israel as the debate over the Iran nuclear deal further soured his relations with a Jewish leadership class already wary of his Israel policies. Litt said Obama made more last-minute revisions to that speech than most of his others in an attempt to connect in a sincere way with his synagogue audience.

As JTA reported at the time, “Most of the audience at the Conservative congregation appeared to applaud and cheer, but a significant minority remained silent.”

In light of what he witnessed, would Litt dare call Obama the most Jewish president we have ever had?

“In the context,” Litt said, “I think that is absolutely right.”

Although the current political environment is “dangerous,” Litt said — adding that Trump’s campaign was the first time he felt “scared” as a Jew in America — he wrote the book in part to inspire people to get involved in political campaigns.

“[If] you want to see America reflect the values that you grow up with and that you hold dear, then you have to be involved in politics and public service in some way,” he said. “I don’t think I will ever do anything as fulfilling as the job that I did.”