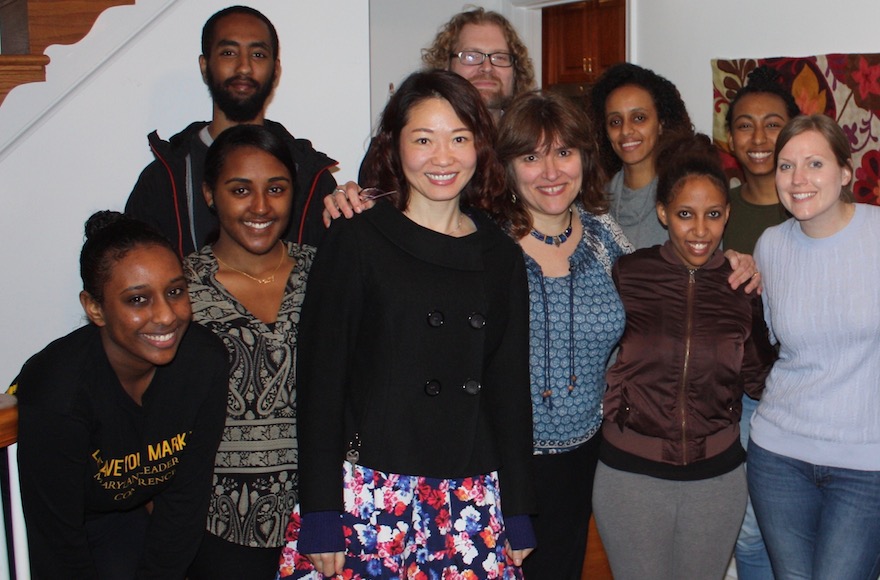 Landa, center in blue shirt, with some of her University of Maryland students. (Courtesy of Landa)
Advertisement

(JTA) — Days after joining a pro-Israel group, Melissa Landa knew something had gone wrong: She said her mentor stopped working with her, pulling out of a conference presentation just days in advance.

Landa didn’t know that her mentor, John O’Flahavan, would then stop taking her calls. Or that O’Flahavan would soon dismiss her from teaching the education course she designed. Or that one year later, she would be fired from the college where she had taught for more than a decade.

But in the late spring, with little warning, Landa found herself packing up her office at the University of Maryland. A boilerplate letter from the university’s Department of Teaching and Learning, Policy and Leadership, called TLPL, informed her on June 8 that her contract as assistant visiting/clinical professor would not be renewed, as it was in the past, that her key to the building had been disabled, and that she had to collect her belongings within a month.

From Landa’s perspective, the firing was a shocking finish to a year of demotions and stonewalling from superiors. No reason was given for her dismissal.

According to emails and text messages obtained by JTA, O’Flahavan and TLPL Chair Francine Hultgren offered Landa varying reasons: the department was being reorganized; she lacked the necessary experience for a new class structure; she already had a full workload; she neglected her professional responsibilities.

But Landa insists the reason is much simpler: She says it is because she is pro-Israel. That’s the basis of a Title IX complaint she has filed with the school alleging wrongful termination on the basis of religion, national origin and political views.

“There was no evidence to indicate that my work as a private citizen was impeding my professional performance,” Landa told JTA, referring to her Israel activism. “Once my involvement with Israel became political, that is when things started to change.”

O’Flahavan and Hultgren did not respond to multiple JTA calls and emails requesting comment. A university spokeswoman, Jessica Jennings, said the university is barred from commenting on confidential personnel issues, but that it does not tolerate discrimination and protects freedom of speech.

In 2007, Landa earned her doctorate in English language education with O’Flahavan, an associate professor, as her adviser. Since then she has been teaching in TLPL, which trains potential educators, including a course she helped design called Language Arts Methods that provides elementary school instruction. She has also taught courses in the university’s General Education Program.

Landa has received two awards from the college for her work — one a month before she was fired.

During that time, Landa also did work on Israel, leading a two-week students’ trip each year to examine Ethiopian immigration and absorption there. In late 2015, she increased her pro-Israel activism in the U.S., heading a group of Oberlin alumni who protested anti-Semitic and anti-Israel remarks by a professor, Joy Karega.

Last year, Landa accepted an affiliate professorship at the University of Haifa as a statement against potential academic boycotts of Israel. She also became involved in the Academic Engagement Network, an intercollegiate association of faculty who oppose the Boycott, Divestment and Sanctions movement against Israel. She spoke at the group’s 2016 conference, and it gave her a micro-grant to set up a research partnership with the Levinsky College of Education in Israel.

It was during that same time that Landa said she began feeling antagonism from her superiors. Days after she became involved in the Academic Engagement Network, Landa said O’Flahavan pulled out of their joint conference presentation — they had been working together for months. Also, days after she informed O’Flahavan of her partnership with Levinsky College, he removed Landa from her TLPL class.

In emails and text messages to Landa, O’Flahavan and Hultgren told her variously that she had neglected her professional duties (she had gone to Israel for Passover in 2016, but Skyped into class and had an assistant substitute for her, per university policy), or that the new class structure — due to a reorganization of the department — left her unqualified to teach.

“While you certainly have the content and pedagogical expertise to teach elementary language arts through a traditional delivery (e.g., on-campus, face-to-face delivery), you have not yet cultivated the pedagogical expertise for on-site course delivery,” read an August letter from Hultgren explaining the decision. It also noted that Landa was teaching a full course load in the General Education Program.

Landa believed that she did have the necessary experience for the class, having taught in public schools for more than a decade. She filed a grievance with the college claiming “religious discrimination, and capricious and unjust treatment.” The hearing board recommended that the grievance be rejected in June, but noted that Landa was qualified to continue teaching in TLPL. Days later, however, Landa received the letter not renewing her contract.

Landa said the firing came as a surprise, even as she knew that O’Flahavan objected to activism on behalf of Israel. In 2015, he asked her not to hang an Israeli flag in her office, and Landa said O’Flahavan made comments disparaging her Oberlin activism.

“I was shocked that he would facilitate the firing of a former student,” she said. “As I became increasingly politically active, from my role as an [Oberlin] alum to my role as a faculty member, he wanted to distance himself from me.”

Landa’s former students have protested her firing. A letter published by 17 former students in the Diamondback, the school newspaper, said Landa “has provided a safe environment and approach to learning, in which students learned about the roots of racial bias,” and called for “reversing this careless decision and bring Landa back to this university.”

A fellow TLPL professor also questioned the decision, praising Landa for her research and teaching.

Landa is now working part time at the Charles E. Smith Jewish Day School in suburban Washington, D.C., and hoping for the best with her Title IX complaint. She has retained a lawyer in case she feels she has to sue.

“Universities, when they have an opportunity to look at themselves and see if they did something wrong, they usually don’t find much,” she said.