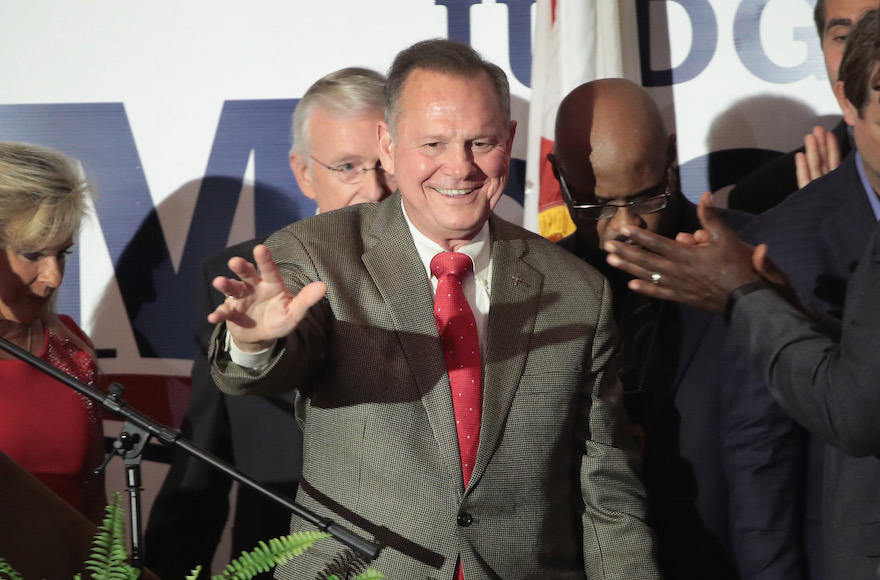 (JTA) — Roy Moore, who was removed as chief justice of the Alabama Supreme Court after refusing to remove a monument of the Ten Commandments from the courthouse, won the state’s Republican nomination for the U.S. Senate.

On Tuesday, Moore defeated the Trump administration-backed candidate to win the special primary runoff for the seat vacated by Jeff Sessions after he was named attorney general by President Donald Trump.

Israel is the only country mentioned in his platform’s section on foreign affairs, which also criticized the Iran nuclear deal without specifically mentioning it.

“We must maintain a strong nuclear defense and not rely on nuclear reduction treaties which leave us vulnerable to foreign powers,” the platform states. “We must remember that Israel is the United States’ most important ally and partner in the Middle East and should reject agreements or policies that undermine Israel’s security. We should pass the Taylor Force Act and move the U.S. Embassy to Jerusalem.”

The Taylor Force bill would slash U.S. funding to the Palestinians as long as the Palestinian Authority continues to compensate the families of attackers on Israelis.

Moore was removed as chief justice in 2003 after refusing to remove the monument he commissioned from the Alabama Judicial Building, despite being ordered to do so by a federal court. He was elected again in 2013, was suspended in 2016 and resigned in April after ordering probate judges to continue to enforce the state’s ban on same-sex marriage even though it had been overturned by the U.S. Supreme Court.

Shortly after the results were announced, Trump tweeted his support for Moore in the general election, which Moore is favored to win.