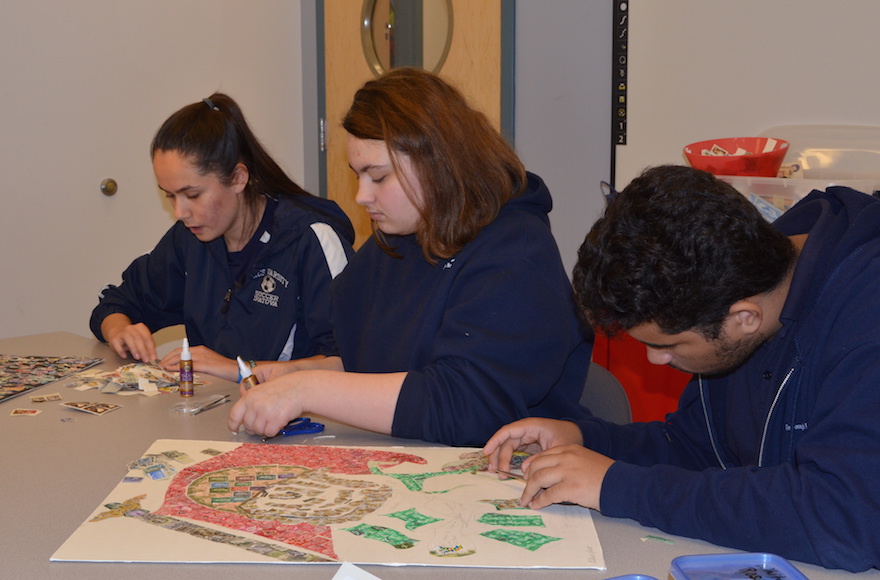 BOSTON (JTA) – A 9-year-old school project to commemorate Holocaust victims surpassed its unlikely goal to collect 11 million stamps – representing the lives of 6 million Jews and 5 million other victims of intolerance who perished.

On Friday, the eve of Yom Kippur, a community volunteer for the Holocaust Stamp Project at the Foxborough Regional Charter School delivered some 7o,000 canceled stamps to the K-12 charter school, bringing the total of stamps collected to 11,011,979, according to Jamie Droste, the school’s student life adviser who oversees community service learning for the high school.

By chance, the goal-setting delivery was made on a day that a reporting team from the NBC Boston affiliate was at the school, located in a suburb south of Boston, to report about the project.

The project began nine years ago in the fifth-grade classroom of Charlotte Sheer as an outgrowth of her students reading “Number the Stars,” the award-winning work of historical fiction by Lois Lowry set during the Holocaust. By collecting 11 million stamps, one stamp at a time, Sheer envisioned the project as a way to make tangible the incomprehensible magnitude of the genocide.

From its modest beginnings of collecting a few thousand stamps, the Holocaust Stamp Project has transformed into an all-volunteer community service component for the school’s high school students. It has also attracted volunteers from the community who help with the time consuming process of counting and sorting the stamps. 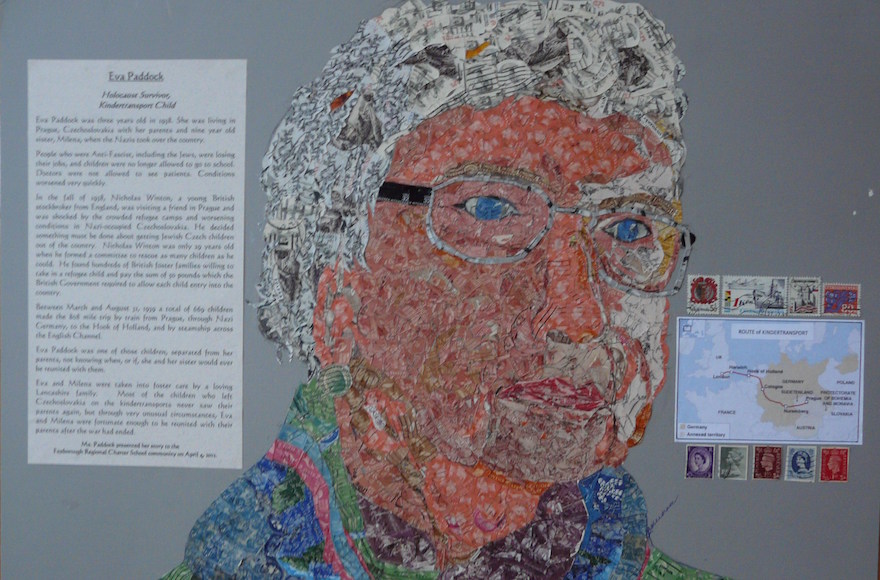 Through the project, students learn about the importance of acceptance, tolerance and respect for diversity, according to Sheer and Droste, who has directed the project since Sheer’s retirement about five years ago.

Over the years, as word of the project spread, with media reports locally and in Israel and Germany, stamps have arrived from 47 states and 22 countries including Australia, Canada, the United Kingdom, Israel and Ireland. Some are sent a few at a time, including from Holocaust survivors or their family members, and others, including some rare stamps, have been donated by collectors in batches of thousands at a time.

As part of the project, students are transforming thousands of the stamps into meticulously crafted colorful collages whose intricate designs reflect a Holocaust-related theme. Thirteen have been completed so far, with a goal to complete 18 collages, Droste told JTA. The collages have been displayed for the community during Holocaust Remembrance programs.

The nearly 1,300 students at the school come from diverse cultures and backgrounds, with many from immigrant families whose lives are far removed from the events of the Holocaust, according to Droste. Some are from countries that have experienced war or economic hardships, she noted.

“The multicultural diversity makes the school strong,” she said. Only a few of the school’s students are Jewish.

In today’s political climate, students are aware of the hate in the world, Droste observed.

“This is one lesson that reaches all of them. We need to focus on peace and what is good and never forget the lives of those who were taken because of intolerance,” she said.

The project was recognized during the Yom Hashoah commemoration last spring with an award by the Jewish Community Relations Council of Greater Boston.

Droste said she is hoping that the collages and collection will find a permanent home at an institution or organization where they can be on display.