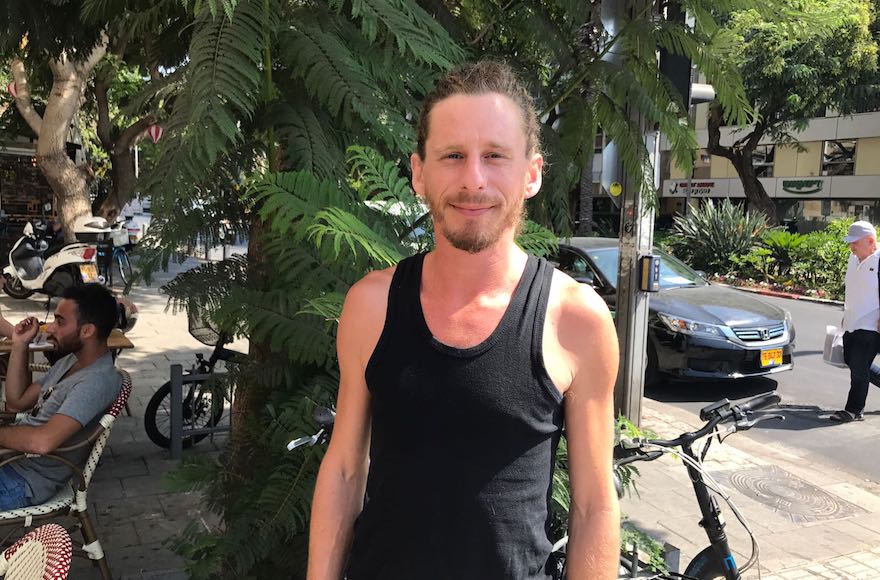 TEL AVIV (JTA) – One night in an orange grove near his hometown in central Israel, Sam Goodriche loaded a single bullet into the barrel of his army-issued rifle.

Goodriche had given two years of his life to intense combat service in the West Bank for the Israel Defense Forces, and after a weekend of leave, he could hardly bear the prospect of returning to duty. Better, he thought, to die in the dirt near his childhood home.

But Goodriche ultimately could not get past the devastation he knew his suicide would cause his family. He unloaded the gun, lit a cigarette and cried — and the next day he was back on his army base.

“I don’t remember exactly, but I know I carried on as usual,” he said, recalling events from 2002. “I didn’t talk to anyone about what happened. I was ashamed.”

It’s not a matter of opening an outreach center in Tel Aviv or setting up a hotline. Instead, Goodriche is going to India, where thousands of Israelis travel every year after finishing their mandatory army service.

“The reason I go to India is to reach the soldiers as close as I can to release,” the 34-year-old London native told JTA at a Tel Aviv cafe. “I try to create a situation where they process what happened to them as soon as possible, so they don’t walk around for 10 or 20 years with this on their chest.”

After running a pilot program over the summer in Dharamshala — a city popular with spirituality-seeking tourists — Goodriche is preparing to return next fall to hold talks with soldiers and direct them to the therapeutic resources in Israel that helped him, including the nonprofits Natal, the Israel Trauma Center for Victims of Terror and War, and Bishvil Hamachar. He also has plans to bring Israeli therapists to India and hold awareness-raising events at Israeli universities.

Goodriche grew up in Misgav Dov, a small village in central Israel with a strong tradition of military service. After graduating from high school in 2001, he enlisted in the paratroopers brigade. It was the height of the second intifada, with Palestinian suicide bombers terrorizing Israelis on a nearly weekly basis, and Goodriche was quickly sent to the West Bank as part of Israel’s harsh crackdown.

He manned checkpoints, patrolled Palestinian cities, arrested suspected terrorists and raided their homes — often coming under attack from teenagers with rocks and Molotov cocktails and men with guns.

“Even if your life wasn’t always in danger, you felt like it was,” he said. “It’s a just a long time under stress being afraid for your life.”

Goodriche grew anxious and depressed. Every night he checked for terrorists under his bed, and he had recurring nightmares in which the barrel of his gun melted as he charged into battle. In 2004, during the final months of his service, he started sessions with his unit’s social worker, who suggested he see a psychologist for symptoms of post-traumatic stress disorder.

Instead, like so many of his peers, Goodriche left Israel when his service was over.

Backpacking in far-flung locales — particularly India — has become something of a national tradition for Israeli soldiers following their service. In 2013, research by the Israeli travel agency Issta found that up to 40,000 Israelis backpack overseas every year, and 70 percent of them are between the ages of 20 and 24. That is a third of the some 75,000 Israelis who finish their duty annually.

According to Darya Maoz, a senior anthropology lecturer at the Hadassah Academic College in Jerusalem, the Israeli backpacking culture is a reaction against army life. Soldiers often grow their hair long, wear loose-fitting clothes and stay up all night. They tend to be permissive when it comes to sex, she said, and do drugs at sky-high rates.

“The journey is seen as 180 degrees from army service,” Maoz said. “Sometimes they smoke [marijuana] and stare at the ceiling for days and weeks. This is very central to the experience, doing nothing as opposed to always doing something.”

Maoz said that for many Israelis, the post-army trip is their first chance to be independent and figure out who they are. Perhaps aware of this, she said, Israeli parents and the society as a whole “turn a blind eye” to the rebellious behavior.

“They know what their kids are doing, but they say OK, they don’t do it here in Israel, they do it far away,” she said. “The important thing is when they return, they will go back to being conformists. They will go to college, get jobs, start families and have children just like their parents.”

Goodriche’s route to India was more roundabout. He spent several years in the United Kingdom, then returned to Israel in 2009, where he worked on a camel farm in Eilat and then moved around following other odd jobs.

But no matter where he wandered, he found the anxiety, depression and nightmares followed. Goodriche began having almost daily flashbacks to his army service. He would check for snipers on the roofs of every building he passed, and he became increasingly standoffish and solitary.

Finally, in 2013, Goodriche sought therapy. He was referred to a psychologist who specialized in trauma in soldiers who promptly confirmed he had post-traumatic stress disorder, or PTSD. Based on the diagnosis, the army discharged him from reserve duty.

Goodriche is hardly alone: According to army studies over the years, 7 to 20 percent of soldiers who experience combat develop PTSD, which puts them at higher risk of killing themselves. In some years, including the past two, suicide is the leading cause of death among soldiers, outstripping combat deaths.

Wild, exotic post-army trips can exacerbate the problem. Tal Brosh, a psychologist who works with Bishvil Hamachar — an organization that takes former combat soldiers on weeklong therapeutic trips — said a small percentage of traumatized soldiers are seriously harmed by their experience overseas.

“When you haven’t gone through any processing or therapy, the trip can be very overwhelming,” she said. “And when you do drugs and you’re already suffering from anxiety of flashbacks, drugs can really worsen the situation.”

For Goodriche, however, going to India was a turning point in his recovery. Last year, after many months of therapy, he took his first trip to the country to stay at a yoga village — and there, in conversations with Israeli combat soldiers on the beach, the idea for Soul Talk emerged. By reaching out to people right after their service and in a relaxed environment, he realized he could help them “process combat experiences” before they created the kinds of long-term problems he has struggled with.

Goodriche returned to India in June and spent two months chatting with Israeli soldiers about what they experienced and how they feel. He held weekly group discussions at a local guesthouse.

One of the discussions was filmed by Israel’s Channel 1. In the video, Goodriche sits cross-legged in front of a couple dozen Israeli backpackers sprawled out around him on floor mats. He recounts being attacked by Molotov cocktail-throwing Palestinians in the West Bank and opening fire. The clash, which ended with a Palestinian teenager dead, still haunts him.

“I remember looking through the scope of my gun, and in the smoke I saw the face of a boy who reminded me of my little brother,” he said. “I still don’t know which one of us shot him.”

Two travelers tell similar stories, and an older man shares that everyone in his brigade still suffers “in one way or another” from untreated symptoms from their service in the 1982 Lebanon War.

“Thirty five years later, it just gets harder every year,” the older man wars. “If you don’t deal with these things straight after the army, the years go by and it hits you in a dark corner.”

Thus the mission of Soul Talk. Soldiers will continue to go into battle, and they will attempt to recuperate by partying through Asia. Goodriche said he simply wants Soul Talk to raise awareness about the psychological toll this reality takes.

“Soldiers will know there is a safety net,” he said. “There is really no reason Israel shouldn’t be No. 1 in the world in treatment of PTSD.”

Though there are many critics of the Israeli army’s handling of mental health, Goodriche among them, there have been improvements in recent years. For example, after the 2014 Gaza War, the army proactively offered treatment to hundreds of soldiers known to have been wounded in combat or involved in intense firefights.

Goodriche would like to see that kind of program extended to all combat soldiers during their service. But in the meantime, he will keep meeting them in India, and not just for their sake.

“This is the only thing that’s given me drive since I finished the army,” he said. “Soul Talk is really giving me life.”