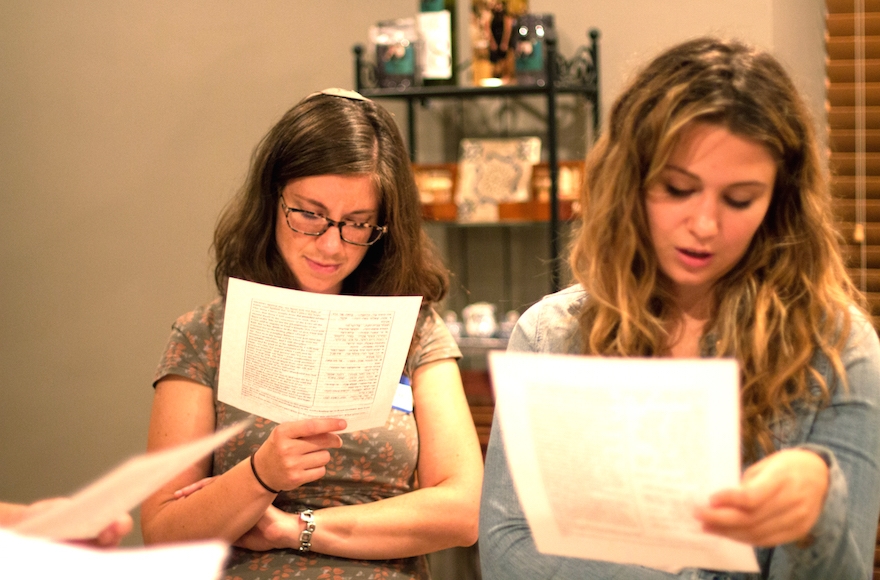 NEW YORK (JTA) — One of these days, maybe ahead of Simchat Torah, you are going to attend a Jewish studies class. Or not. But let’s say you do.

You’ll sit in a classroom, or a lounge, or in the front row of a synagogue. There will be a teacher, and he or she will pass around a stapled packet of papers — maybe two sheets, maybe five — with various biblical verses, Talmudic excerpts, examples of Jewish law and perhaps a snippet of a contemporary essay or a quote from Martin Buber or Hannah Arendt.

I want to talk about these sheets, why they may be uniquely Jewish, and why they may be the most important and ubiquitous example of Jewish educational technology that you probably take for granted — or never heard of.

The packets are known as source sheets, and they’ve been with us since … well, at least since the widespread use of the mimeograph machine in the 1950s. Before that, rabbis or teachers might quote from a pile of Jewish books they kept in front of them, and perhaps refer students to a similar pile on their desks.

But once teachers could cheaply copy fragments of Jewish text, and cut and paste them in any order they wished, the source sheet became a tool for flexibility, convenience and ingenuity in the Jewish classroom. And their current dominance is an example of how technology transformed tradition — and continues to do so in the digital age.

“When you are weaving together different threads from different texts composed during vastly different times and places, the best way is to pull excerpts from different texts,” said Sara Wolkenfeld, director of education at Sefaria.org. “There is an art form to it. The way you pull and combine helps express the story you want to tell in the class you are teaching.”

Sefaria, a nimble online database of Jewish texts in both their original language and in translation, is rapidly becoming the red-hot center of the source sheet universe, which I assure you is a thing. Since Sefaria was founded in 2013, over 12,000 people have made some 74,000 source sheets using the site’s handy source sheet builder. Of those, 7,200 of their creations are available online. (Disclosure: Daniel Septimus, Sefaria’s executive director, sits on the board of 70 Faces Media, JTA’s parent company.)

And the range of subjects is testament not only to the depth of the Jewish canon but to the breadth of Jewish obsessions. There are sheets for lessons on sex, death, love, money, family strife and sibling rivalry, Donald Trump and Hillary Clinton. For Simchat Torah, which begins this year on the evening of Oct. 12, there’s a sheet on the rules about women dancing with a Torah scroll. There’s even a sheet about whether or not Jews should take part in Halloween. 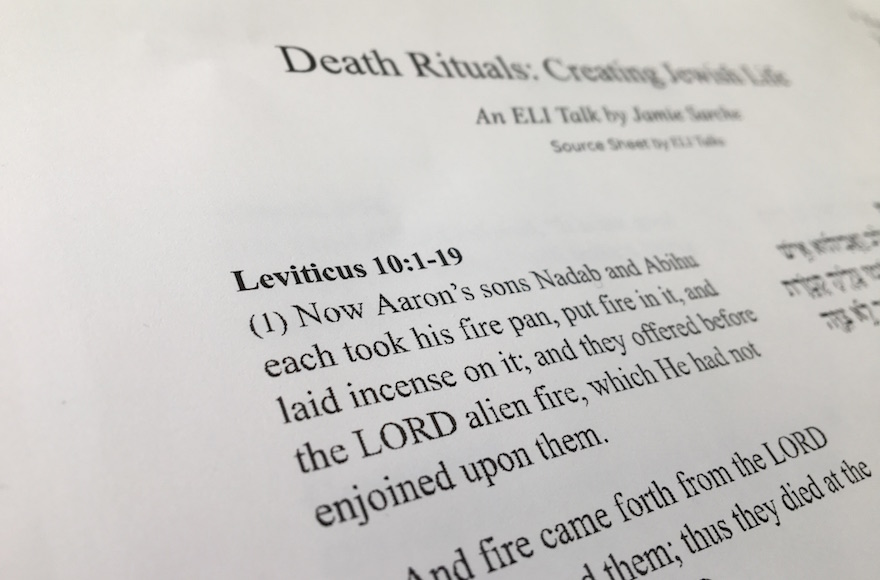 One of 7,200 source sheets available at Sefaria.org. (JTA)

To teach a lesson on Jewish views on the afterlife, for example, he might include verses from the Bible; Talmudic passages known as Mishna or Gemara; perspectives from the medieval sages Maimonides and Saadia Gaon about the soul and reincarnation; and a teshuvah, or rabbinical ruling, from the 20th-century Modern Orthodox authority Rabbi Moshe Feinstein. These would form the basis for a guided classroom discussion, perhaps after the students had a chance to review the material and a few key questions in chavruta — that is, in pairs or small groups, a staple of yeshiva education going back centuries.

Epstein might not get to every text in a lesson, but that’s OK.

“The lesson is like a concert and the source sheet is more like a set list,” he explained. “You’ll get to it, but maybe you’ll cancel some songs or just play a few of the longer songs.”

The key, he said, is knowing your audience — the languages they understand, their level of knowledge and their interests.

“You need to make the student feel connected and touch the head and the heart and the hand,” Epstein said. “And not just teach them new info, but teach them to do something. That’s what I based my lessons around.”

Rabbis and teachers had always done this kind of layered Jewish teaching, building an argument or lesson out of centuries of Jewish writing on a topic the way a geologist describes a mountain by pointing to the layers of rock beneath the surface. But the source sheet revolutionized Jewish learning by making sure every student was literally on the same page.

Many educators credit Nechama Leibowitz, a legendary Israeli teacher, with popularizing and democratizing Torah study in Israel with the distribution of her mimeographed work sheets, or gilyonot. Sent to subscribers by mail between 1941 and 1971 (and later collected between hard covers), Leibowitz’s work sheets offered Torah verses and rabbinic commentary, and questions quizzing students on the connections between them.

Leibowitz, who was teaching nearly up to the moment she died in 1997 at age 92, would comment on the students’ answers and mail them back.

Barry Holtz, the Theodore and Florence Baumritter Professor of Jewish Education at The Jewish Theological Seminary, remembers learning Torah from original texts and all-Hebrew textbooks in the 1950s at Congregation Kehillath Israel in Brookline, Massachusetts. But the assistant rabbi there, Joseph Lukinsky, introduced new ways to teach his Hebrew school classes.

“He was an incredibly creative young rabbi, maybe ahead of the curve,” Holtz recalled. “He must have been one of the first people to introduce a tikkun leyl Shavuot” — an all-night study session on the spring holiday of Shavuot — “outside of the Orthodox world, in 1962, just for the teenagers.

“It’s weird that I can remember this, but he had created a packet I suspect is someplace in a closet in my house, with texts that we studied all night long, and the title was ‘Gods Jews have known, and Jews God has known.’ It was so radical and amazing and interesting at the time.” 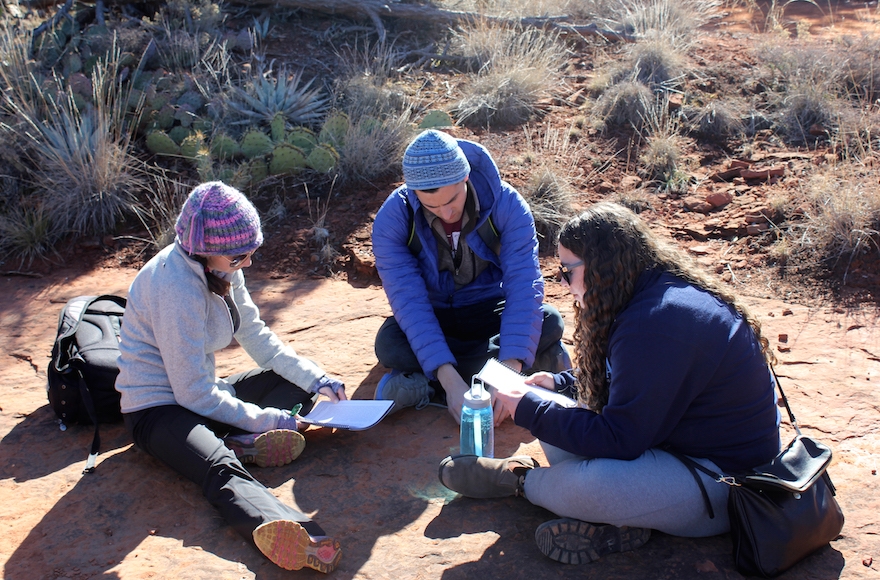 Lukinsky, who died in 2009 at 78, became a revered professor of education at JTS.

Source sheets have spread to all the Jewish movements, and to classrooms where the often esoteric Talmudic texts and medieval commentaries may be daunting or unfamiliar.

“I am a lover of rabbinic text — particularly in the Reform movement that often finds it less accessible,” said Rabbi Sari Laufer, director of congregational engagement at the Stephen Wise Temple in Los Angeles. “People aren’t as familiar [with Talmud or rabbinic text] or feel that it is not ours in some way. I am very committed to using and unlocking a lot of rabbinic text.”

A prolific poster to Sefaria, Laufer has created source sheets on work-life balance, the theology of food and seduction, and the imagery of darkness in Jewish thought, among many others.

Working though the multiple layers of Jewish learning, she said, “grounds us in an entire history — a great reminder that questions we think of as modern are questions people have been asking for thousands of years with incredible insight.”

And sometimes a list of sources can be a powerful tool for conversation — and even change.

Abby Stein, a transgender activist and teacher who grew up in a prominent Hasidic family in Williamsburg, New York, uses a source sheet in classes she teaches on Judaism and gender. The sheet, titled “Changing the Conversation: Jewish-Gender IS Queer … and Feminist,” is available on Sefaria and linked to her Facebook page.

“After everything I had done to enrage the Hasidic community, the most negative, most hate I ever got was for that Torah sheet — not media, not transitioning, but for publishing that source sheet,” Stein recalled. “It threatens them the most because it is using their own text.

“Usually they are very dismissive. Here when I show them a text from a Hasidic rabbi saying a man [can be] in the wrong body, or from Zohar saying an ideal person has to balance femininity and masculinity at all times, or a wife can’t have kids because she is a male, they can’t just dismiss it as BS.”

Sefaria is trying to chart a future for a study tool that is itself the product of a mid-20th century information revolution. Its library of online source sheets is interactive — that is, every source on a sheet links to the database of myriad Jewish texts.

“When you put a bunch of sources on paper, the audience can only see what’s on the sheet,” Wolkenfeld said.

Using the database, however, “you are in control of the story. You can open up a chapter and see the larger context,” she said. “From three commentaries I can navigate to 10 others.”

And if students have tablets or laptops, they can do all that exploring during the lesson itself.

Holtz warns that if there is a downside to the source sheet, it’s the temptation by a teacher to pick and choose from the wide and woolly corpus of Jewish text to prove a dubious point.

“Some would argue … that you don’t cherry-pick,” said Holtz, who wrote a popular beginner’s guide to studying Jewish text, “Back to the Sources.” “And Jewish study according to this argument should not be about all the good parts or the cool parts or obviously meaningful parts, but you should work hard through all the parts as you encounter them.”

And as seductive a tool as source sheets can be, many teachers don’t want them seen as substitutes for the real thing.

“A source sheet, as critical as it is, it is a tool but no replacement for the text in the original,” said Tzvi Sinensky, the rosh beit midrash, or dean of Jewish learning, at the Kohelet Yeshiva High School in suburban Philadelphia. “We want our students engaging with the original texts and have the skills to parse the Gemara — not to know about the text, but to know it.”

The source sheets Sinensky has posted to Sefaria have been viewed nearly 95,000 times.