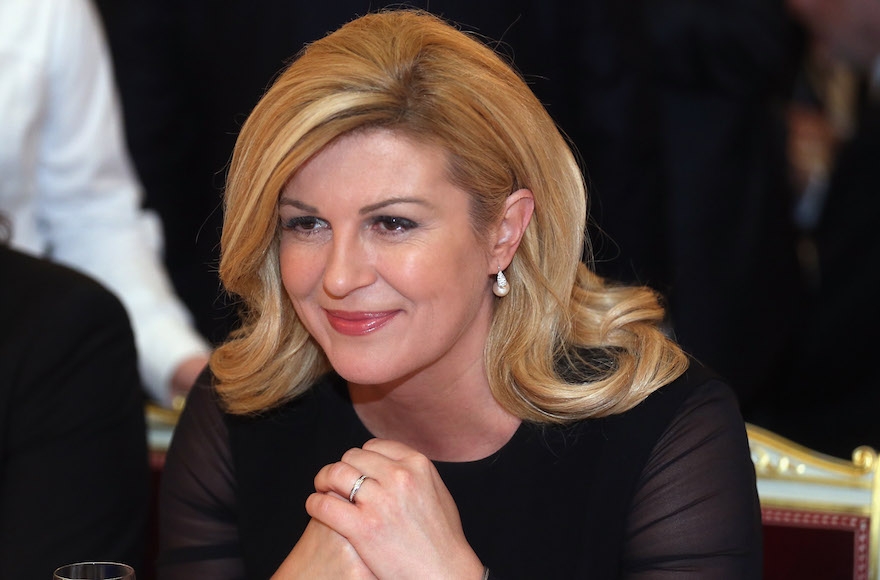 (JTA) — In an unusual plea, the World Jewish Congress urged international bodies to oppose what it calls “brazen attempts” to whitewash Holocaust crimes in the European Union’s newest member, Croatia.

The call came in a 4,000-word position paper published Monday in Tablet magazine by Menachem Rosensaft, the WJC’s general counsel.

The article, titled “Croatia is Brazenly Attempting to Rewrite its Holocaust Crimes Out of History,” examines dithering and mixed messages by the Balkan country’s highest elected officials on the Ustasha, a fascist movement led by Ante Pavelić that murdered hundreds of thousands of Serbs and tens of thousands of Jews during World War II. Reviled by many Croatians for their war crimes, Ustasha criminals are celebrated as heroes by many others — often with a nod from the government.

Last year, Croatian President Kolinda Grabar-Kitarovic posed during a trip to Canada with an Ustasha flag. The previous year in Israel she expressed her “deepest regrets” to victims “killed at the hands of the collaborationist Ustasha regime.” Prime Minister Tihomir Oreskovic also condemned the Ustasha publicly, but did nothing when soccer fans chanted the Ustasha slogan during a match that he attended against an Israeli team.

These events and others prompted the local Jewish community to boycott government-sponsored Holocaust commemoration events for two consecutive years since 2016.

The veneration of pro-Nazi war criminals is not unique to Croatia in Eastern Europe, where Russian expansionism is serving to legitimize the open celebration of anti-Russian fighters who murdered Jews and perpetrated other war crimes on the side of Nazi Germany. Similar processes are the subject of an intense public debate Hungary, Ukraine, Lithuania and to some extent also Poland.

Croatia, which was accepted into the European Union in 2013, is unusual in that the veneration of war criminals comes from the top echelon politicians, and in the Jewish community’s resolute stance against such rhetoric.

Moreover, Rosensaft wrote, “the recasting of the Ustasha as national heroes and role models has ominous connotations in a country and region where ethnic hatred and strife have had catastrophic consequences, not just during WWII but more recently during the Balkan wars of the 1990s.”

As Croatian nationalists are “becoming increasingly brazen, if not overtly shameless, in their attempts to write the crimes against humanity committed by the Ustasha out of their nation’s history,” Rosensaft concluded, support for the Jewish community’s opposition to these efforts “should come not just from international Jewish organizations and other Jewish communities, but from institutions and agencies around the world that are dedicated to the preservation of the memory of the Holocaust and other genocides.”

While Israeli-Croatian bilateral relations “are excellent,” the WJC’s CEO, Robert Singer, said in a statement to JTA, his organization is “deeply concerned by what appears at best to be official indifference to the resurgence of the fascist Ustasha movement that actively participated in the perpetration the Holocaust.”