How to get more women speakers at big Jewish events 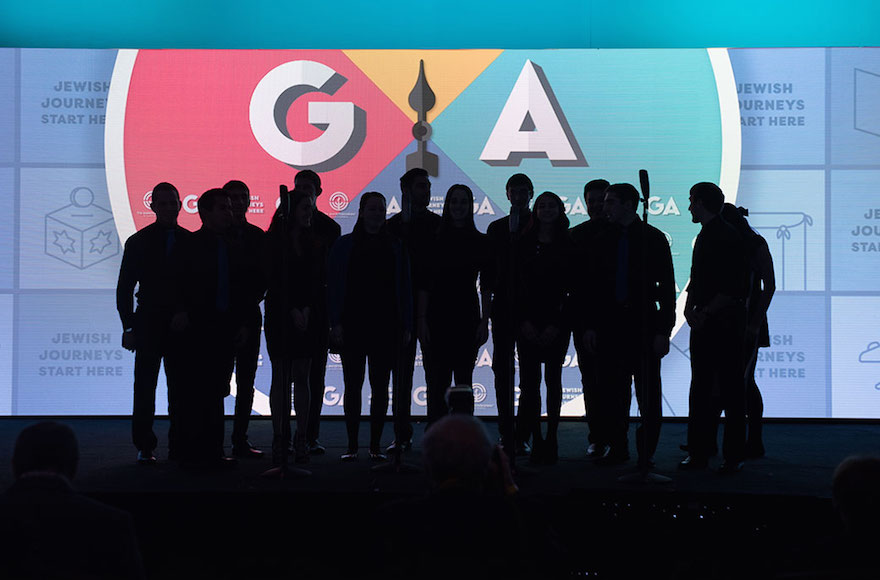 LOS ANGELES (JTA) — In November, the General Assembly of the Jewish Federations of North America is coming to Los Angeles for the first time since it became my home city in 2008.

Over the course of my Jewish professional life, I have eagerly attended at least six General Assemblies, one of organized Jewry’s largest gatherings: I spoke at a plenary, in front of thousands in Nashville, Tennessee. I helped JFNA organize an innovators’ “schmooze” reception at GAs in New Orleans, Denver and Baltimore, and spoke on topics like young Jewish engagement and social media. Each GA represented a massive convening of energy, and the opportunity for Jewish geography, networking and reinvigoration.

And on Monday, I visited JFNA’s website (generalassembly.org) and saw the list of six “confirmed speakers” on the draft program.

I understood that this was a problem of optics, not intentional omission. Logically, I knew the GA program has dozens of panels, workshops and plenaries, and multiple speaker slots. With the number of women in Jewish life, obviously women would be speaking over the course of the conference. But the elevation of six men as the confirmed speakers seemed to convey that women either had not confirmed as speakers or were not impressive enough for top billing. And those are optics we should all be sensitive to.

I posted a screenshot on Facebook and the conversation began, with participation from engaged Jews of all ages and professional affiliations, including JFNA professionals. While many started with frustration, the conversation evolved into something precious and productive.

Commenters asked how we could work together to change the optics, if not for this conference, then for the future of Jewish conferences. Some suggested pressuring speakers to make their acceptance contingent on female counterparts. Others recommended resources — tagging women they knew and considered to be speaker-worthy, or providing links to Advancing Women Professionals in the Jewish Community’s Men as Allies pledge, and a Twitter list called #AwesomeJewesses that Jewish communal professional Jeremy Burton started several years ago to help combat what is still, unfortunately, a problem.

On Tuesday, I spoke with Rebecca Dinar, associate VP of strategic marketing and communications at JFNA, who told me that JFNA was behind in updating the website because the organization has been “laser-focused” on providing support to communities — including Houston, Puerto Rico and others — suffering the impact of natural disasters. Perhaps thanks to the Facebook conversation we started, the full program and all of the confirmed speakers — more than half of whom are women — are now available online.

“We’re glad that we were able to put all the information up there because without a doubt it is a priority for us to make sure that the GA represents the diversity of the community at large,” she said, noting that Advancing Women Professionals’ Shifra Bronznick has worked with JFNA for nearly a decade to provide information to federations and advocate for gender equality in the workplace. “We spend a lot of time to make sure there’s balance, and the speakers list and attendees demonstrate that.”

Dinar mentioned as example one panel that will feature three female legislators who put forward and passed anti-BDS legislation in their states.

Many of us want to move the cause of gender equality and equal representation forward. So here’s what we — as individuals representing organizations large and small — can do.

Make sure that our fliers, brochures, ads and programs for conferences and events reflect gender (and other kinds of) diversity. This builds visibility, helps reshape expectations in the community, keeps us mindful of the optics and prevents speculation in the absence of information.

Commit to placing women as heads of federations, other Jewish organizations and major initiatives. When all the top-level executives are men, they continue to be the most in-demand speakers, commanding the prime space on the programs and highest speakers’ fees.

Can’t find any women speakers (or speakers of color or speakers from the LGBTQ community)? Seek out people who can help. Advancing Women Professionals, ROI Community and the Schusterman Foundation can help. Burton’s #AwesomeJewesses list is a resource. Check out TED Talks, or their Jewish cousins JDOV Talks and ELI Talks. Hire men who are active allies for equal representation and ask them who to call. Or ask an awesome Jewish woman to recommend her favorites.

Give the community a voice. Crowdsource speakers from the local, national and international community. Allow them to pitch and program panels like they do at the tech/music/film conference South by Southwest, or engage organizations that serve special populations to co-create sessions that ensure a broader spectrum of content

Don’t get starstruck. Sure, you want a big name for your program. And maybe men are more heavily credentialed or more famous than the women who speak on the same subject. But be the organization or event that helps increase visibility for women on the rise — help us all “see tomorrow’s stars first.”

This year I will be attending the GA as media. And I’ll be listening for diverse voices across the spectrum of politics, race, gender and culture, and looking out for those who are flying under the radar, as if they were Jewish communal Wonder Women in invisible planes.

The Jewish community has talent that is diverse, erudite, irreverent, passionate and deserving of a spotlight far brighter than what our community has thus far provided.

(Esther D. Kustanowitz is based in Los Angeles, where she is an editor at GrokNation.com and a contributing writer at the Jewish Journal.)