What happens now with the Iran deal 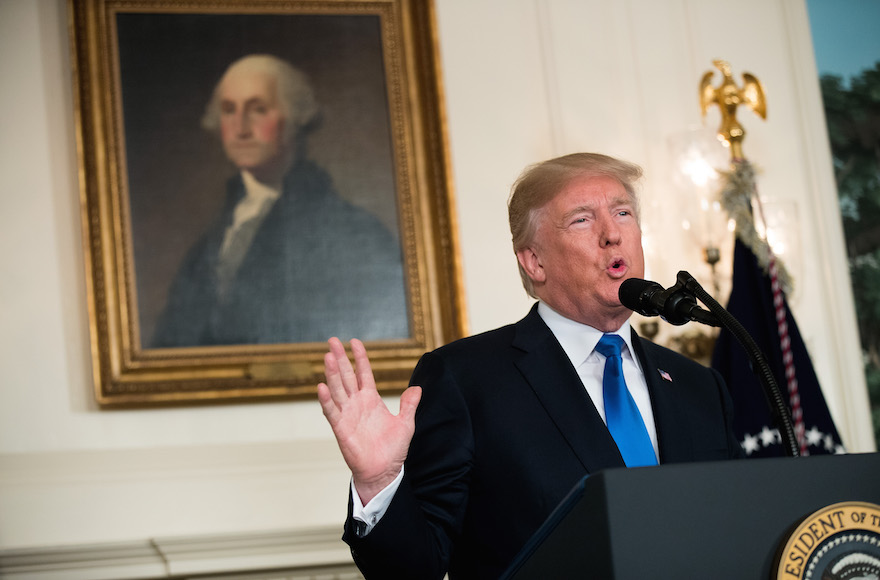 President Donald Trump making a statement on the administration's strategy for dealing with Iran, in the Diplomatic Reception Room in the White House in Washington, D.C., Oct. 13, 2017. (Drew Angerer/Getty Images)
Advertisement

WASHINGTON (JTA) — President Donald Trump has said what he wants Congress to do with the Iran nuclear deal, which he has called the worst in the world: Make it better.

How does that happen? Is it possible to “fix” the deal without breaking it?

Here’s a breakdown of what Trump wants, what might happen and where the Jewish organizations, many who were fierce opponents of the original deal, are on the issue.

The 2015 deal negotiated by the Obama administration, the European Union, Britain, Germany, France, Russia and China with Iran traded sanctions relief for a rollback of Iran’s nuclear program. Trump can leave the deal whenever he wants: All he has to do is stop waiving — that is, restore — the sanctions removed by the deal.

Top security advisers have talked Trump out of that option, saying it could damage the U.S. reputation. Instead, they have counseled him to decertify Iranian compliance with the agreement under a 2015 law passed by Congress as a means of overseeing the deal: the Iran Nuclear Agreement Review Act, or INARA.

Under the act, once Trump decertifies — he said he would do that in a White House speech on Friday — Congress has 60 days to reimpose sanctions. But the White House is not asking Congress to reimpose the sanctions. Rather the president wants new legislation, through an amended INARA or through a new law, that would effectively reshape the deal, known formally as the Joint Comprehensive Plan of Action.

Trump wants the new laws to override provisions of the deal, including the so-called sunset clauses that lift restrictions and allow Iran to enrich fissile material beginning within the next decade. Trump wants a law that would keep U.S. sanctions in place should Iran remove the restrictions, even though the sunset clauses allow them to do so.

In another instance, the deal includes a complex and relatively lengthy procedure for International Atomic Energy Agency nuclear inspectors to visit sites not covered by the deal. Trump wants a law that would reimpose sanctions unless Iran agrees to simplify the procedure.

Trump said Friday in outlining the policy that if he’s not happy with the outcome, he would pull out of the deal.

“In the event we are not able to reach a solution working with Congress and our allies, then the agreement will be terminated,” he said. “It is under continuous review, and our participation can be canceled by me, as president, at any time.”

What happens next, congressional version

Two prominent Republicans in the U.S. Senate, Tom Cotton of Arkansas and Bob Corker of Tennessee, are shaping legislation according to Trump’s specifications. The legislation is still being drafted, but Corker last week released a summary of the proposal.

Enacting the bill as it stands now is unlikely. Advancing the legislation requires 60 backers in the Senate, as none of the 48 Democrats in the body of 100 are likely to get on board. Minority Leader Charles Schumer, D-N.Y., said as much, referring to statements by Trump’s top military advisers, who oppose killing the deal despite its flaws.

“The @SenateDems agree with (Secretary of Defense James) Mattis and (chairman of the Joint Chiefs of Staff) General (Joseph) Dunford,” Schumer said on Twitter after Trump announced his decision. “We won’t allow the Iran deal to be undone.”

What happens next, international version

The likelier way forward would involve not Congress but U.S. allies who signed on to the deal. This would involve increasing pressure on Iran outside the context of the nuclear deal, which Trump could claim as an improvement.

The three European governments that signed the deal released a statement Friday saying they opposed rupturing the pact, but were eager to squeeze Iran for its other malign activities, including missile testing and military adventurism.

“We stand ready to take further appropriate measures to address these issues in close cooperation with the U.S. and all relevant partners,” the statement from the governments of Britain, Germany and France said.

Trump in his own remarks suggested he was open to that route.

“I urge our allies to join us in taking strong actions to curb Iran’s continued dangerous and destabilizing behavior, including thorough sanctions outside the Iran Deal that target the regime’s ballistic missile program, in support for terrorism, and all of its destructive activities, of which there are many,” he said.

Trump could then legitimately claim that the international community was focused more holistically on Iran’s overall bad behavior and not narrowly on the nuclear program.

Robert Satloff, the director of the Washington Institute for Near East Policy, said in a conference call Monday organized by the Jewish Federations of North America and the Jewish Council for Public Affairs that this could offer a win-win: Keeping the deal in place for those who favor doing so while allowing Trump the opportunity to say it was improved.

“The main focus is trying to get our allies to get together with the United States and reach improvements, and then the president will say ‘good enough,'” he said.

Where is the pro-Israel camp?

Israeli Prime Minister Benjamin Netanyahu is enthusiastic about Trump’s proposal, especially the prospect of killing the deal outright should the Iranians not play ball. Among international leaders, only the Saudis share Netanyahu’s enthusiasm.

“I believe that any responsible government, and whoever seeks to promote peace and security in the world, needs to take advantage of the opportunity that President Trump’s decision has created in order to improve the agreement or abrogate it and, of course, stop Iran’s aggression,” the Israeli leader said Sunday in remarks opening his weekly Cabinet meeting.

The centrist pro-Israel community is less sanguine. Like Schumer and other Democrats who opposed the original deal, there is a sense among pro-Israel groups that breaching the deal would damage America’s ability to affect Iranian behavior by reducing U.S. credibility among allies.

Instead, the major groups urged collaboration by Congress, the administration and U.S. allies to address flaws while keeping the deal intact.

The American Israel Public Affairs Committee welcomed Trump’s speech, but emphasized that he was not proposing ending the deal, at least for now.

“The president made clear his view of the deficiencies in the JCPOA, but he also indicated that the United States is not withdrawing from the accord at this time,” AIPAC said in a statement. “Instead, he called upon Congress and our allies to work together to address the deal’s problematic sunset clauses, the lack of sufficient inspections, and the danger posed by Iran’s ballistic missile program.”

An AIPAC official told JTA that it was too early to assess whether the group would back the Corker-Cotton bill, as a final version was not yet released.

David Harris, the American Jewish Committee’s executive director, said in a post on the group’s site that it wasn’t useful to relitigate earlier political battles over the deal.

“At this point in time, whatever earlier views were, it is absolutely essential that the Administration, Congress, and our key allies in Europe, the Middle East, and Asia work as collaboratively as possible on the Iran threat,” Harris said.

Jonathan Greenblatt, the Anti-Defamation League’s national director, said rupturing the agreement now could destabilize the region. His group, like the AJC, opposed the deal.

“A reimposition of sanctions and an unraveling of the deal would not only have a negative impact on America’s international leadership and foreign affairs priorities, but could bring immediate threats from Iran,” Greenblatt wrote on Medium. “But there is an opportunity now to reset the terms of this debate.”

“Congress does not need to be an accomplice in Trump’s plan to unravel the Iran deal,” the group said in a statement. “They can stand up against a course of action that could lead to an unconstrained Iranian nuclear program or another war in the Middle East.”

On the right, the Zionist Organization of America, in a post by its president, Morton Klein, in advance of Trump’s speech, opposed keeping the deal in place.

“The only things likely to slow Iran is pressure, including and especially renewed sanctions,” Klein wrote. Decertifying the JCPOA but keeping the United States “in this deeply flawed agreement,” he added, “is illogical and useless.”