Making havdalah the ‘high’ point of the week 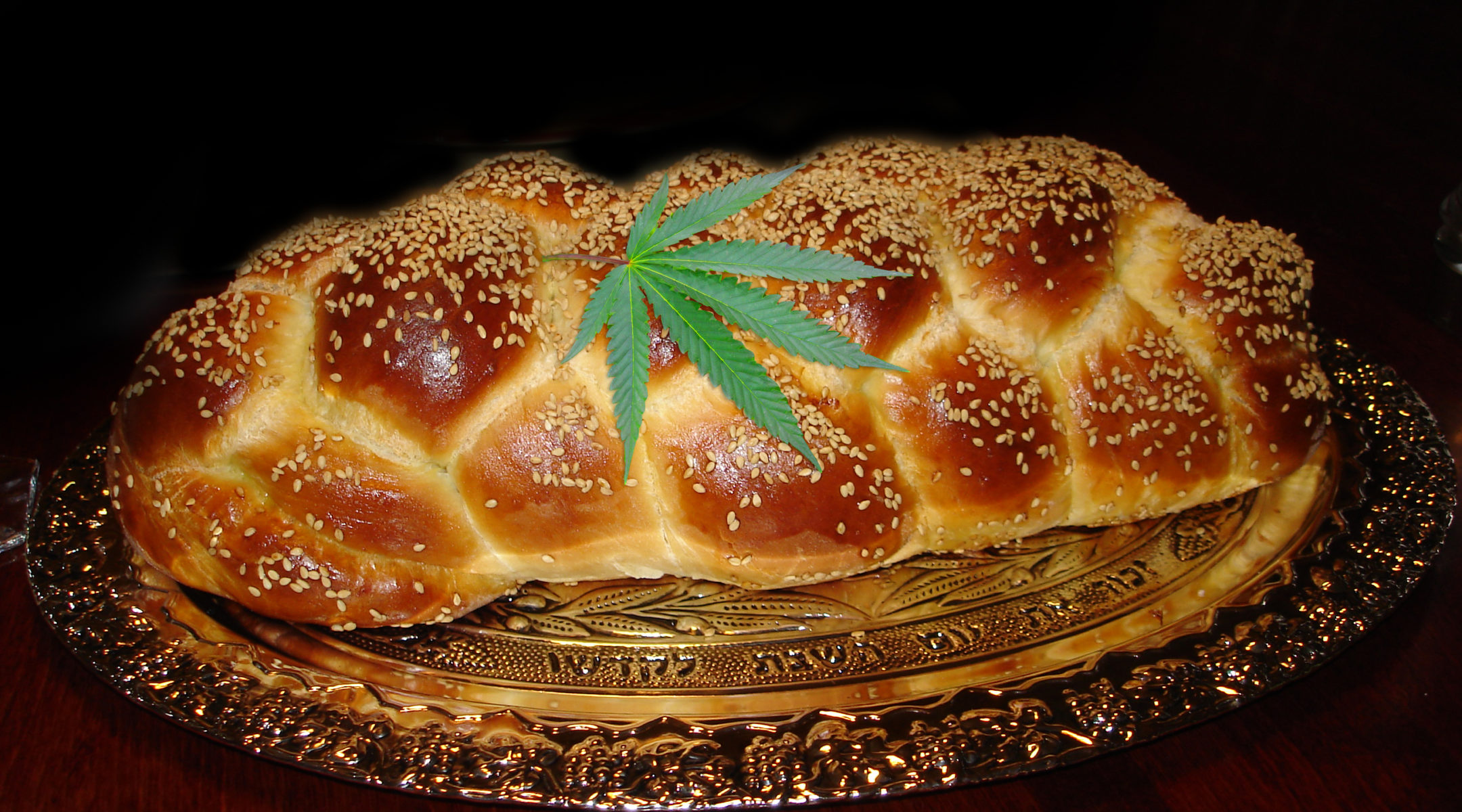 NEW YORK (JTA) — Marijuana entrepreneur Catherine Goldberg was working on an event with the Orthodox founders of Mitzva Herbal, a company that makes kosher-certified cannabis-infused edibles, when she shared her dream of uniting marijuana-loving Jews over Friday-night dinners.

“They were, like, ‘Cat, we can’t smoke on Shabbat,” Goldberg, 28, recalled. “So I figured havdalah, instead, was perfect.”

Thus “Chai Havdalah” — in which “chai” is pronounced “high” — was born.

Since July it has become a somewhat regular event, advertised by word of mouth, that marks the end of Shabbat with the traditional havdalah blessing alongside the less traditional acts of smoking marijuana and eating cannabis-infused edibles.

So far there have been five Chai Havdalah events, mostly in the herb-friendly states of California and Colorado. But last weekend, on the second floor of a brownstone in Brooklyn’s Park Slope neighborhood, about three dozen people gathered to smoke pot, listen to the sounds of a local hip-hop duo, bid farewell to Shabbat and usher in a new week.

“I love being Jewish and I love weed, so it made sense to bring my two passions together,” Goldberg said on Saturday night, wearing a shirt with the words “Let’s Get Chai.” “I wanted to show people that Judaism can be really fun and it doesn’t mean you have to go to temple. I wanted to build a community around food and a new way of doing things.”

Plus, she added, “Jewish people have been proven to have high rates of anxiety, and weed helps with anxiety.” 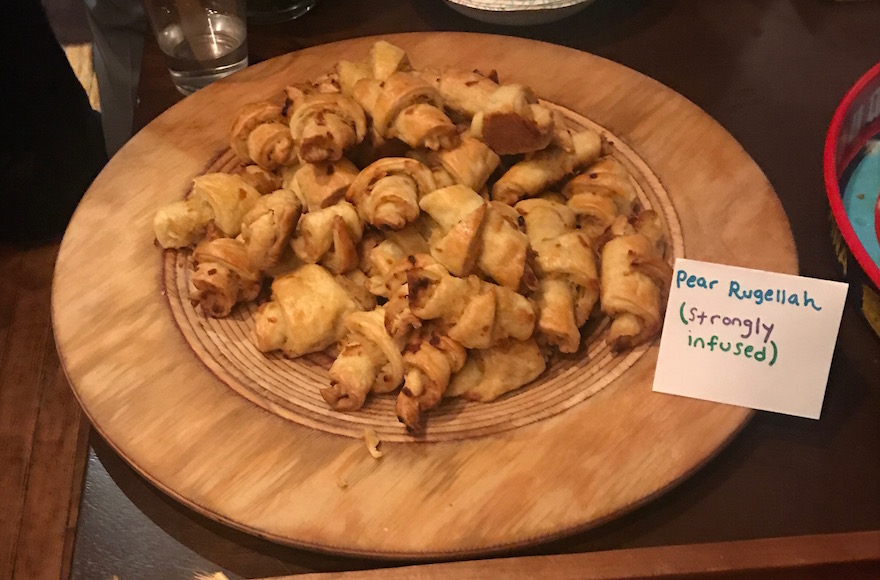 Cannabis-infused Jewish delicacies, of various levels of potency, were on offer at the Brooklyn party. (Lucy Cohen Blatter)

Unlike Colorado, where recreational marijuana use became legal in 2014, and California, where possession is legal and adults may buy from licensed retailers beginning next year, marijuana is not legal in New York.

Nonetheless, Goldberg said, “I’ve always wanted to do events in New York because I know there are so many great artists who would take part.”

Every Chai Havdalah has featured some sort of performance. In Brooklyn, KillinH8 rapped about topics including Judaism and gender non-binary identity. One half of the group, who calls herself “Hila the Killa,” sang some lyrics in Hebrew.

Goldberg, who lives in Los Angeles, is on a mission to spread the gospel of marijuana — she frequently writes about her passion for weed for High Times magazine. In a recent column, she explained how cannabis can help fulfill the Jewish ideal of “tikkun olam,” or healing the world.

“Once we heal ourselves, we can heal our friends and family,” she wrote. “There’s a massive amount of sickness and sadness and suffering in the world. Cannabis can’t fix any of those problems. But it can help us feel calmer, smarter and more focused. It can help us eat to be stronger and feel less pain. It can help put us in the mindset to perform at our best in order to take on the challenges of the world.”

Goldberg said she grew up “super Reform” in Florida, but started to get more involved Jewishly while at Sarah Lawrence College in New York, when she began attending Congregation Beit Simchat Torah, a Manhattan synagogue with a congregation that is largely gay, lesbian, bisexual, transgender and queer.

“I hated going to temple in Miami; I was always worried that someone would find out that I was gay,” she said. “Or I was just frustrated that I had to dress up. CBST was just an amazing place to be myself.”

Around the same time, she got into marijuana — partly, she said, to help with her anxiety and obsessive-compulsive disorder.

In addition to hosting marijuana-focused events, she curates a cannabis gift box called The Weekend Box and runs BrainBuzz, a content marketing company for the cannabis industry. She’s keen to promote marijuana’s positive effects, especially in helping to reduce pain and “quiet the mind,” which is why she uses it. Goldberg uses cannabis several times a day, starting with her morning coffee.

And there are many applications, she noted. Cannabis-infused lotion, for example, should be in every old-age home in the country, she said.

“It’s a great, natural painkiller,” she said. (She had some on hand at Saturday’s event and rubbed it on a reporter’s hands — no immediate effects were felt.) 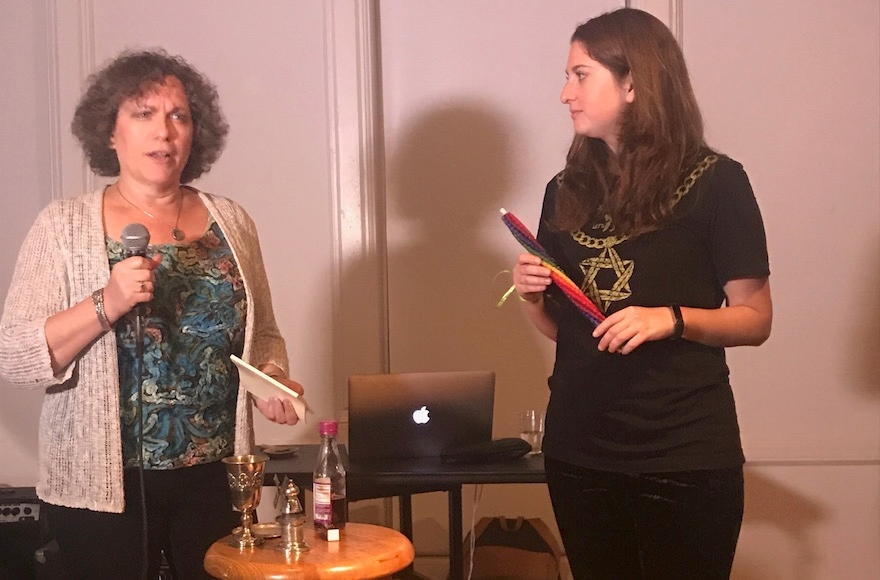 “I think the sense of joy and warmth and community that comes out of these events is a great way to start the week,” she said of the Chai Havdalah parties. “Also, since we don’t serve alcohol, no one ever wakes up with a hangover. It’s just a new way to socialize and have fun.”

Of course, like any good weed event, tasty food is included. The “chef du cannabis” in Brooklyn was Alex Koones, who runs Babetown, a monthly popup supper club for queer women and trans and non-binary people, and also dabbles in weed-infused cooking.

For the squash latkes, for example, the onions were sauteed in weed oil. Other edible options included pumpkin blintzes and pear rugelach.

Karen Benezra, whom Goldberg met through CBST, performed the havdalah service at the event. Holding a rainbow-braided candle, Benezra led the group in tunes from Debbie Friedman as Goldberg stood by wearing a shirt featuring a Star of David drawn with rolled marijuana joints. While Benezra said she’s not a regular user of marijuana the way Goldberg is, she is pro-cannabis.

“I recognize that it has a lot of medicinal purposes we’re just learning about,” she said.

Goldberg is also making her dream of a weed-friendly Friday-night dinner a reality: Her first Elevated Shabbat dinner, which will pair courses with different types of marijuana, will be in Los Angeles on Nov. 3. Adults 21 and older with medical marijuana cards may smoke marijuana, even though it’s Shabbat, when tradition forbids smoking of any kind.

“It’s a much more laid-back, Reform-type of party,” she said.

“We’re gonna do a medicated seder, a ‘Let’s Get Lit’ Hanukkah event and something for Purim, too,” she said. “There’s a lot of stuff happening.”

“I want weed to be as mainstream as coffee and energy drinks. I want people to understand that this is a plant-based medicine that Hashem grew.”