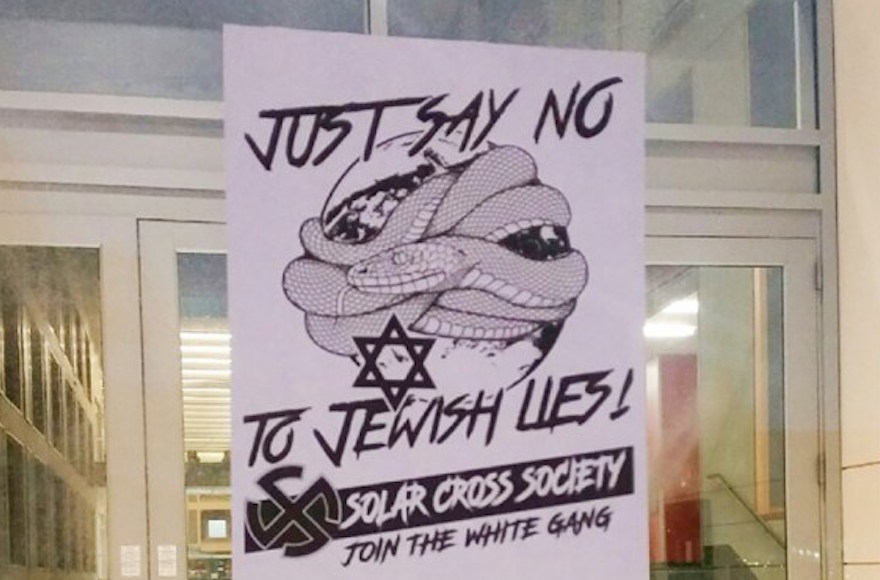 (JTA) — Anti-Semitic fliers with swastika-like symbols were discovered on the campus of Cornell University in upstate New York.

The posters, which read “Just say no to Jewish lies!” and urged students to “join the white gang,” were discovered Monday morning and taken down the same day. They promoted the “Solar Cross Society,” but there is no such group at Cornell and it does not have an internet presence.

“Whoever is responsible for these fliers is hiding under the cover of anonymity, having posted them overnight,” she said in a statement. “Whoever they are, they need to ask themselves why they chose our campus, because Cornell reviles their message of hatred; we revile it as an institution, and I know from many personal conversations that thousands of Cornellians deplore it individually.”

Police were investigating the matter and increasing patrols around Jewish buildings on campus, the Cornell Hillel said in an email to the Jewish community.

“We are deeply concerned that a poster of this nature was placed on our campus, as these sentiments run counter to the spirit of diversity and pluralism that our university works to uphold,” Hillel Executive Director Rabbi Ari Weiss said in a statement.