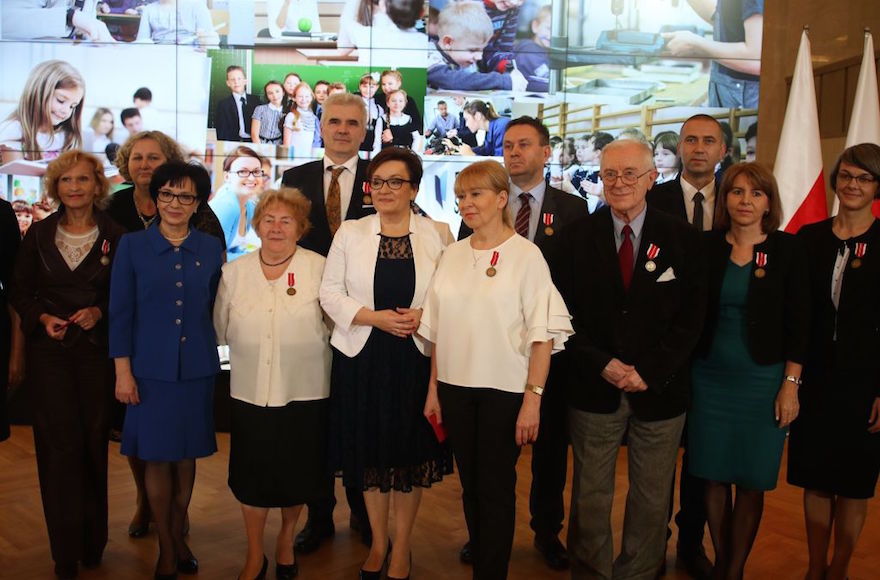 Tomasz Panfil, standing at rear, left, was among the educators receiving honorary medals from the Polish Minister of National Education at a ceremony in Warsaw, Oct. 16, 2017. (Institute of National Remembrance)
Advertisement

WARSAW, Poland (JTA) — A Polish historian who said the country’s Nazi invasion was initially not so bad for Jews received a medal from the Polish education minister “for special merits for education.”

The minister, Anna Zalewska, presented Tomasz Panfil with the honor at a ceremony Oct. 16 in Warsaw.

Panfil, who is responsible for education at the Institute of National Remembrance in Lublin, wrote an article earlier this month in which he stated that “after the aggression of Germany into Poland, the situation of the Jews did not look very bad.”

“Although the [Nazi] occupation authorities took over, they ordered the wearing of armbands with the star of David, charged them heavy taxes, began to designate Jews-only zones only for the Jews,” he wrote, “but at the same time permitted the creation of Judenrat, that is, organs of self-government.”

The Institute of National Remembrance criticized Panfil for his statement. Holocaust historians note that the Judenrats were specifically set up to carry out German policy in the newly formed ghettos, where Jews were forbidden to leave under penalty of death.

The Gazeta Wyborcza newspaper this week revealed that in 2014, Panfil issued an expert opinion to a Polish court in which he wrote that the swastika is an ambiguous symbol — not only related to Nazism, but also one that symbolizes happiness in some cultures. He also claimed then that the NSDAP, or the Nazi Party, was a leftist party.