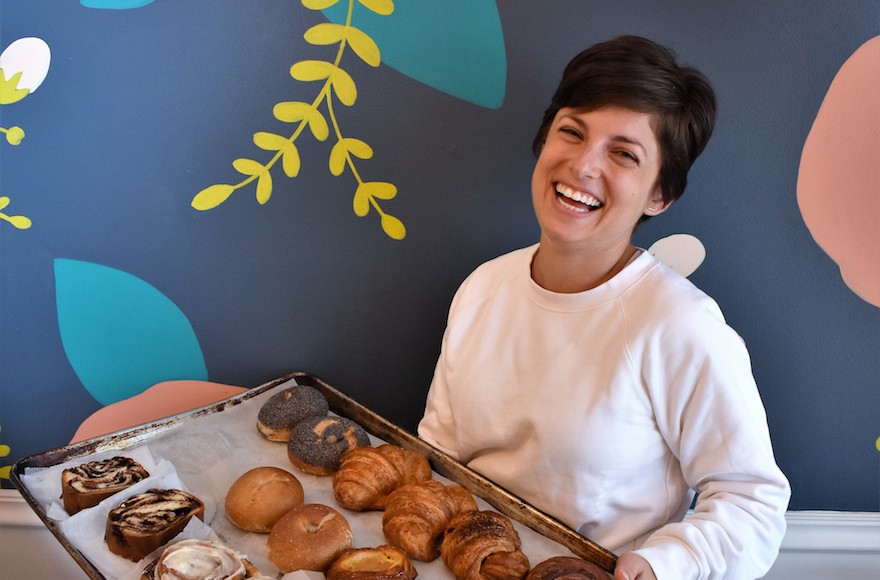 PHILADELPHIA (JTA) — Opening a Jewish bakery with a Yiddish name in an Italian neighborhood sounds crazy, but it didn’t take long before Essen had a line of regular customers lining up for its fresh-baked challah on Fridays.

Tova du Plessis opened Essen, which means “to eat,” in South Philadelphia in April 2016 after stints as a pastry chef at some of this city’s top restaurants.

She set up shop on East Passyunk Avenue, a once-blue collar stretch that has undergone a food renaissance in recent years. These days, you can find Filipino, Nordic and French restaurants from top chefs alongside old-school red-sauce eateries like Marra’s, which has been in business since the 1930s. Intimate and cozy — there are just three small tables inside — Essen brings a Jewish, Eastern European accent to the avenue. 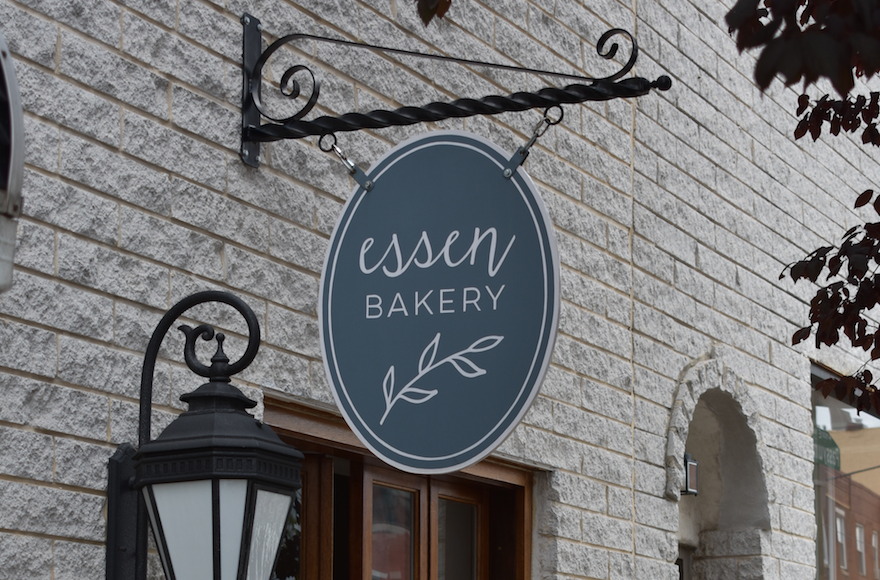 Jewish foods are having something of a renaissance across the United States, particularly in Philadelphia. Eateries from Zak the Baker in Miami to Shelsky’s of Brooklyn to Wexler’s Deli in Los Angeles are turning out fresh, modern takes on Jewish classics, with everything from pickles to gefilte fish receiving the “artisanal” treatment.

Here in the City of Brotherly Love, Michael Solomonov, the inventive chef behind Zahav, the Israeli restaurant often credited for popularizing Sephardic-style food in America, and Abe Fisher, a restaurant focusing on Ashkenazi food (among others), is something of a celebrity, having been awarded the foodie equivalent of an Oscar.

As for Essen in East Passyunk, “It was an odd location for a Jewish bakery, but I live nearby and I was excited to be a part of the neighborhood scene,” du Plessis told JTA. Many of her customers, she added, aren’t Jewish.

Among them is Cathy Frisoli, a lifelong resident of South Philly.

“I only knew about babka from ‘Seinfeld’ — the episode where he has to have a chocolate one,” she said. “So the morning of my husband’s birthday, I woke up early and went to Essen to get a babka before they sold out. I took it to our family celebration and all the aunts and uncles really loved it. For us it was a nice change from cannolis. Now I buy Essen’s babka all the time.”

Du Plessis, 32, grew up in a kosher home in Johannesburg, South Africa, where she enjoyed helping her mother make traditional Askenazi foods like gefilte fish, potato kugel and chicken soup every week for Shabbat. Her mother always put her in charge of dessert.

“She made it my job,” du Plessis said, noting that now, as a professional baker, “I look back and realize that she nurtured that.”

Du Plessis moved to the United States for college, earned a degree in biology from the University of Houston and was on the path to becoming a doctor. Baking was just a hobby until she spent a few days in Paris and found herself walking into every bakery she passed.

“I visited two or three bakeries every day,” she said. “I never had pastries like that in my life. I was drawn to the desserts.” 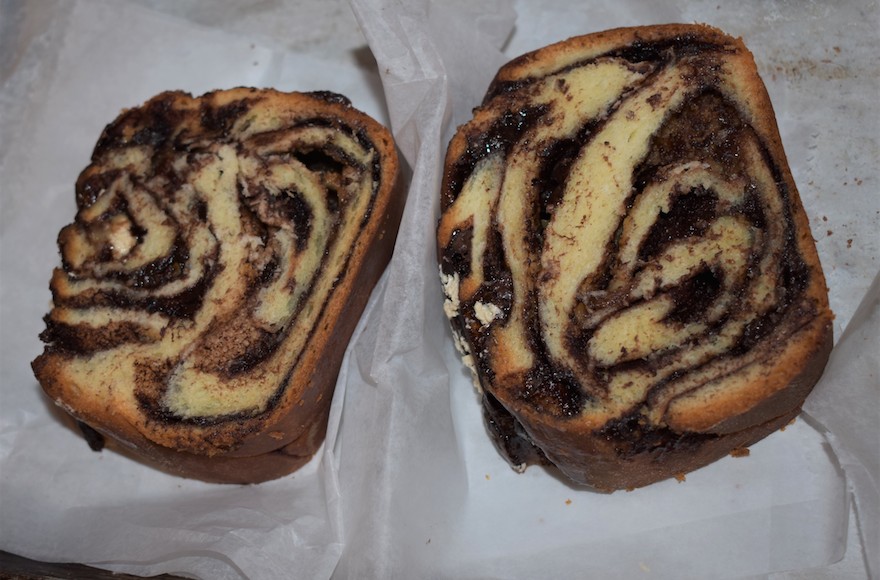 One of Essen’s many non-Jewish customers knew about babka from “Seinfeld.” (Ellen Scolnic)

So du Plessis switched gears and enrolled at the Culinary Institute of America in Northern California’s Napa Valley to pursue a degree in baking and pastry arts.

“It takes a different kind of person to be on the baking and pastry side,” she said. “It’s much more exact than the culinary arts.”

It was there that du Plessis first met Solomonov.

“His food was phenomenal and I was intrigued by Zahav,” she said. “I was amazed that there was an Israeli restaurant in Philadelphia – not kosher and not marketed just to the Jewish community – that was doing so well.”

Solomonov invited du Plessis to intern at Zahav, where she worked as a line cook, and later hired her to open a kosher restaurant, Citron and Rose, in the Philadelphia suburbs (it has since closed).

“I was excited about the project,” she said. “We were reviving Old World cuisine but making it modern.”

“Michael inspires me,” she added. “He’s embracing his heritage and not really feeling embarrassed by it. Kugel and chopped liver aren’t high end, but foods with that much memory attached to them are special – and you can put your modern stamp on it.”

Similarly, now in her own kitchen, du Plessis enjoys tinkering with recipes, especially those for bread.

“You can make little tweaks in the mixing, proofing, shaping and baking and come out with a very different product,” she said. “Every culture has its bread. There’s Indian naan and Middle Eastern pita. For Jews it’s challah.”

The challah of du Plessis’ childhood, however, was big, round and filled with raisins, which she didn’t like. She remembers being annoyed at having to pick each one out, so it’s no surprise that she has updated her mother’s recipe.

“I spent a lot of time working on it to get it where I wanted,” she said. “At Essen, I actually use honey in my challah, which gives it a way better flavor.” 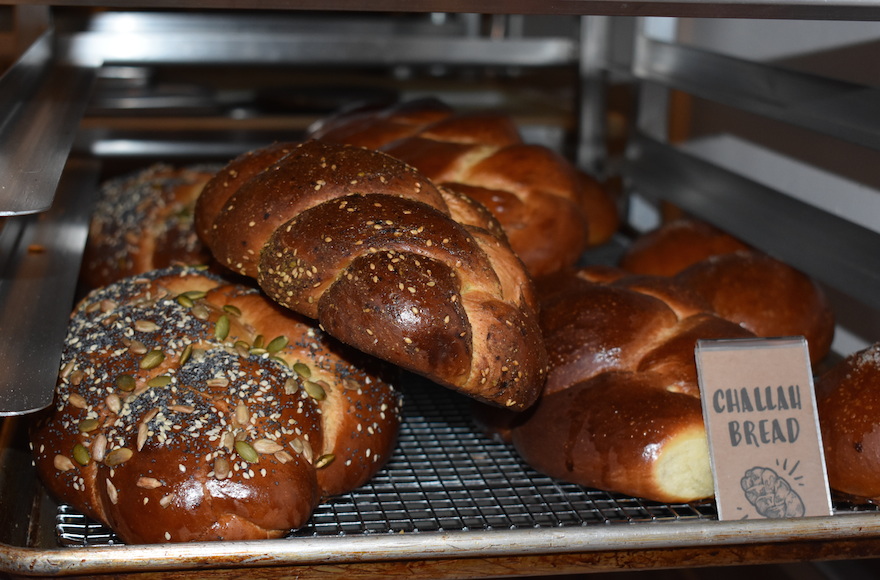 The challah at Essen comes in several varieties. (Ellen Scolnic)

Du Plessis also makes more savory varieties: one crusted with poppy, sesame and pumpkin seeds, and another topped with zaatar, a blend of Middle Eastern spices and salt.

Whether sweet or salty, du Plessis emphasizes that Jewish food connects Jews to their traditions.

“Food has an emotional component,” she said. “It plays a huge role in keeping people engaged and involved, and helps us retain our Jewish identity.”

Seeing as she owns a heimische bakery that turns out treats like danish and rugelach, it’s probably no surprise that du Plessis’ most beloved Jewish foods are the desserts of her childhood. Her mother only baked babka for special occasions — du Plessis makes it every day in her bakery. Her chocolate halva babka has earned the highest praise; it’s a delicious example of how she has updated a classic.

Of course, with training anchored in French technique, du Plessis couldn’t have a bakery that did not sell croissants. Along with the traditional version, she makes one spiced with zaatar.

“I wanted the bakery to represent me – of course it has to have a Jewish slant – and to make products I really love,” she said. “I’m not a purist; I’m not trying to make old Jewish recipes. I see them more as inspiration, as a jumping-off point.”