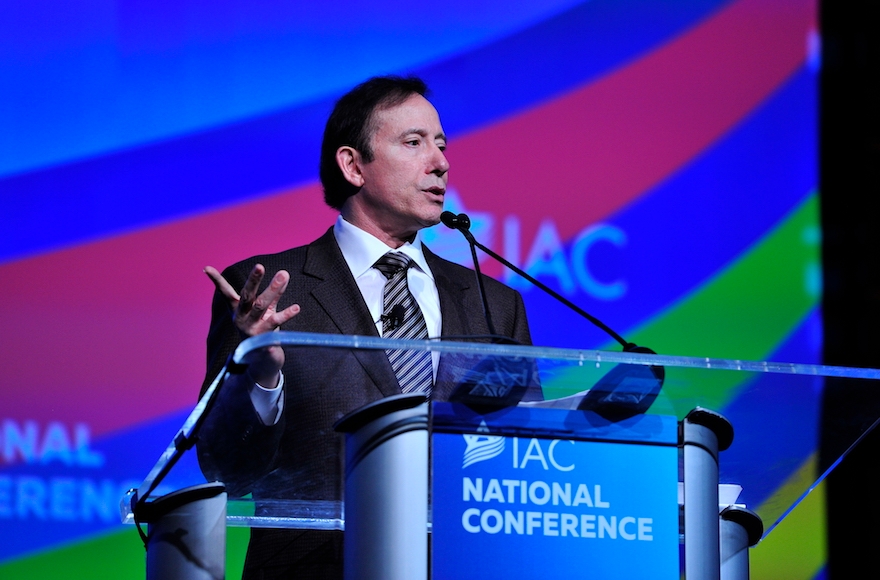 (JTA) — What can Israelis in America teach American Jews?

If you ask Adam Milstein, chairman of the Israeli-American Council, the answer goes on and on. American Israelis, he says, can make American Jews more connected to the Jewish state. They can show them the warmth of Israeli culture. They can connect them to Israel’s burgeoning tech scene. And they can teach them Hebrew.

He acknowledges that American Jews have built lasting institutions and robust organizations, something his group — which mixes Israeli culture with pro-Israel advocacy — is trying to emulate. But 10 years after the IAC launched, he feels Israeli Americans are the engine that will power the American Jewish community in the next decade and beyond — especially when it comes to pro-Israel advocacy.

Days before IAC’s annual conference, which runs Friday to Monday in Washington, D.C., Milstein spoke with JTA about how the organization has grown. (The Milstein Family Foundation is partnering with JTA by underwriting independent coverage of Israelis in America.)

JTA: How have Israeli-Americans changed over the past 10 years?

They’re not really Israeli. They’re Americans of Israeli descent. Israelis don’t view them as Israeli, they say, “Hey, you left.” [And] they couldn’t really take part in the political process because they were foreign. The Jewish community gave them a cold shoulder unless they were willing to give money, and then they became Jews.

Anti-Semitism clearly is growing in the United States. We as people who came from Israel, we know how to stand proud and fight back, and we feel we should be part of this campaign against anti-Semitism. We are very involved in passing anti-BDS legislation. We are also helping to expose anti-Israelism in the U.N. We have a heavy social media presence to post pro-Israel media stuff and help rebuff anti-Israel media stuff. We have helped with the bipartisan effort to bring people from both sides of the aisle to pass the Taylor Force Act.

How can IAC help bridge the gap between American Jews and Israel?

Israel is no longer the glue, it is the wedge. It’s no longer a place that we pray for, it’s the source of disagreement. Our view is we need to accept and support the State of Israel because it’s not perfect, but it’s the only one we have.

We understand where American Jews are coming from, we understand where Israelis are coming from. We don’t get involved, whether the way conversions are overseen in Israel are correct or not, whether the Western Wall arrangement is correct or not. We are saying the decisions of the State of Israel should be done by its citizens. We are promoting the fact that Israel is a democratic country.

I would not come and say, ‘Israel, if you don’t do this and this I will boycott you, I will stop funding you.’ This is wrong.

I think we share with the people of Israel this character that’s called Israeliness. You know how we make one another happy; we become friends overnight. We are really a family from the get-go, coming and sleeping over without any pre-arrangements. We’re proud Jews. We don’t have to be Orthodox or Conservative or Reform or whatever.

What have you learned from American Jews?

How do you maintain a secular Israeli culture in America?

Obviously Hebrew is an essential part. A lot of our activities from a young age are in Hebrew. We have a lot of spiritual activities. We understand that to be secular alone, you will not stay Jewish, so to stay spiritual is an asset for us. We do some programs nationally called Shishi Israeli where we bring hundreds of people together to spend Friday together. We celebrate all the Jewish holidays. We celebrate the independence of Israel.

Israelis used to look down on their fellow citizens who moved abroad. Has that changed?

It’s absolutely changed. We are able to convince Israelis that we are a strategic asset of Israel in the United States. We are their family, we speak their language, we understand them. They give us much more respect. They visit with us. They recognize us.