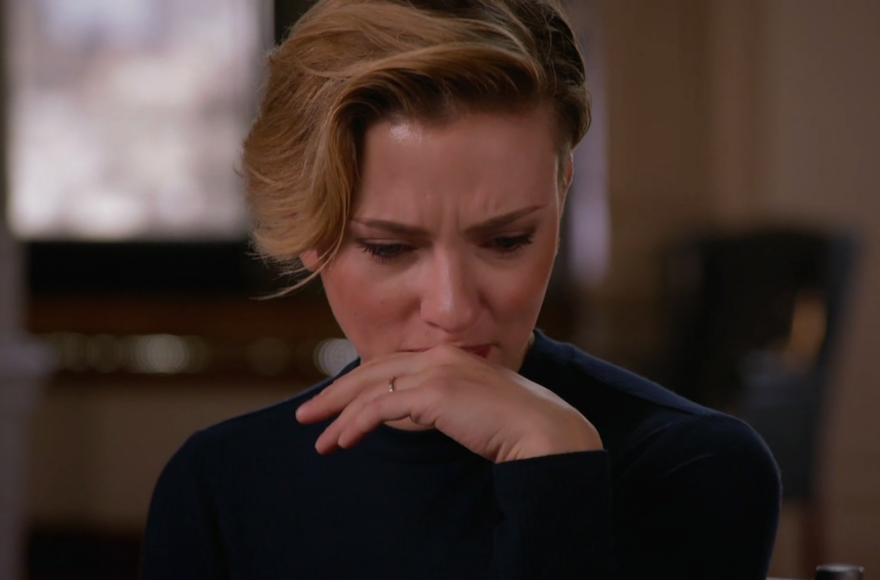 (JTA) — Scarlett Johansson knew that her mother’s side of the family came from Jewish communities in Eastern Europe, but she didn’t know much else about her Jewish ancestors.

But when the movie star appeared on the PBS show “Finding Your Roots” on Tuesday night, she learned some specifics about those branches of her family tree — and broke down in tears upon learning about their tragic Holocaust experiences.

In 1910, Johansson’s maternal great-grandfather Saul Schlamberg (who was then still going by his Yiddish first name, Schlachne) immigrated from a small town in Poland to New York City. He settled on Ludlow Street in the city’s Lower East Side, which was full of Jewish immigrants at the time, and was believed to have sold bananas at a market. He was alone, not yet 25 and very poor.

Johansson, whose father is Danish, is visibly moved as she pored over a document about the ship Saul took across the Atlantic Ocean.

“You kind of imagine your ancestors, ‘Oh, they came over on this ship or whatever,’” she said. “But then to actually see the paper and know that they were journeying towards what would eventually result in me — it’s pretty surreal.”

Sadly, the narrative takes a dark turn as host Henry Louis Gates, Jr. shifted to the family Saul left behind in Grojec, Poland. Saul’s brother Moishe and his family of 10 children ended up in the Warsaw Ghetto by 1942. By that time, all of Grojec’s Jews had been either killed or deported.

“I cant imagine what you must be feeling,” Johansson says when Gates asks about what she thinks deportation for the family must have been like. “Just hell, it must’ve been hell.”

Thanks to a testimony one of Moishe’s daughters sent years later to the Yad Vashem Holocaust museum in Israel, Johansson learns about the fate of some of Moishe’s other children: Zlata, 15, and Mandil, 17, both died in the Warsaw Ghetto.

After reading this, Johansson begins to cry.

“It’s crazy to imagine that Saul would be on the other side selling bananas on Ludlow Street and how different it would be being in America at that time,” Johansson continues. “The fate of one brother versus the other. It makes me feel more deeply connected to that side of myself, that side of my family. I didn’t expect that.”

Johansson wasn’t the only Jewish actor to learn about a dark ancestral past in Tuesday’s episode. Paul Rudd was also surprised to hear about the anti-Semitism his grandfather faced in England, even after World War II.