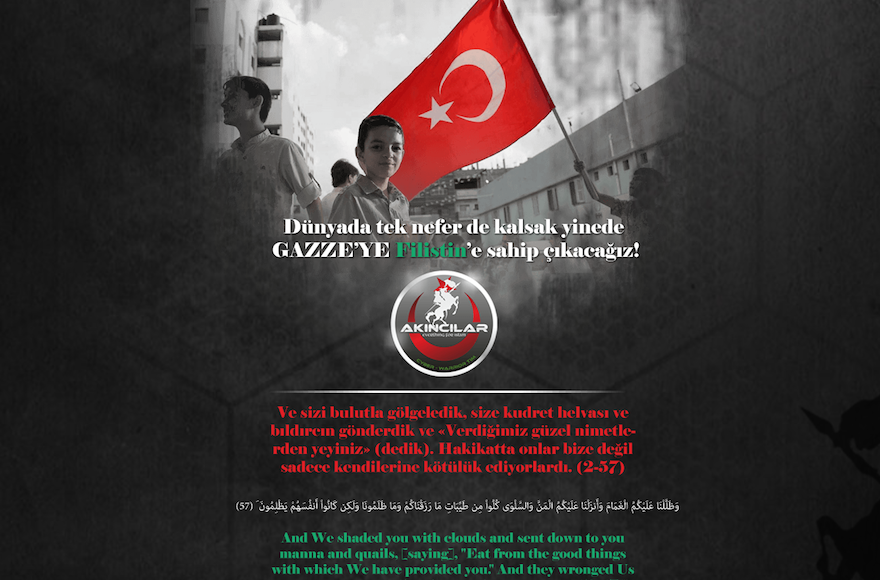 (Screenshot from Times of Israel)
Advertisement

(JTA) — The Times of Israel’s website was hacked by a Turkish group on the 100th anniversary of the Balfour Declaration.

On Thursday morning, the English-language news site’s homepage featured an image of children waving a Turkish flag and a line that apparently vowed to protect “Palestine” and Gaza.

Underneath that was a Quran verse that reads, in part,  “And they wronged Us not — but they were [only] wronging themselves.” It was written in Turkish, Arabic and English.

The page was signed by the group Akincilar, which hacked multiple Dutch websites earlier this year after Turkey and the Netherlands had a political falling-out in the wake of Turkish President Recep Erdogan’s controversial referendum win.

The Times of Israel is under hacker attack. We're working to restore normal service as soon as possible.

Several of the site’s partner publications — such as the Atlanta Jewish Times and the New Jersey Jewish Standard, which are published online through the Times of Israel site — were not affected by the hack. However, the homepage of The New York Jewish Week, one of the Times of Israel’s partners, led to the same Akincilar page on Thursday morning.

The site was back online late Thursday afternoon.

“How unfortunate, and how badly it reflects on them,” said Times of Israel editor David Horovitz, “that the hackers seek to prevent people from reading responsible, independent journalism on Israel, the Middle East and the Jewish word.”

Thursday is the centennial of the Balfour Declaration, the first public statement from the British government that announced it supported the establishment of a Jewish state in then-Palestine.