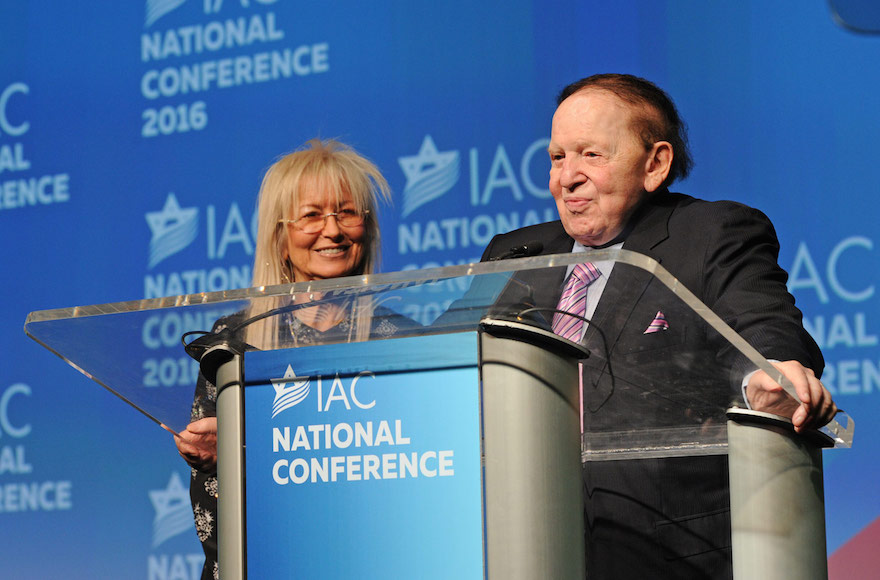 WASHINGTON (JTA) — Sheldon Adelson, the billionaire casino magnate and major Jewish philanthropist, said he was the principal funder of the Israeli American Council because its support for Israel was “unequivocal” compared to other American Jewish groups.

Adelson, speaking Sunday evening at the IAC’s annual meeting, was explaining why he has backed the organization since its 2007 inception — as it happens, the year he broke with the American Israel Public Affairs Committee over its backing for the George W. Bush administration’s Annapolis peace push.

“I said to myself, ‘Self, this could be an unequivocal support organization for Israel,'” he said. “There’ll be no political correctness, there’ll be no questions about whether we can keep the White House door open to us.”

That was an apparent reference to AIPAC’s policy of maintaining access to the White House, whatever tensions there might otherwise be between an administration and the pro-Israel community.

Adelson reviled the Obama presidency, fighting the administration at every turn over over government spending, Obamacare and the Iran nuclear deal. AIPAC had a relationship with President Barack Obama that was at times tense and other times mutually supportive. It vigorously opposed Obama’s Iran policy, but encouraged his efforts to advance Israeli-Palestinian peace, as long as Israel’s government was on board.

Adelson said he was encouraged to see a crowd of 2,500 at the IAC conference and took an explicit shot at AIPAC.

“It reminds me of the days of when AIPAC started to grow,” he said. “It grew from less than 2,500 people, smaller than that. This group, the IAC, won’t even question whether or not we should support Israel.”

Marshall Wittmann, the spokesman for AIPAC, which now attracts upwards of 15,000 activists to its annual conferences, said in response, “We wish the IAC success in its efforts to strengthen the U.S.-Israel relationship.”