What unites and divides Israeli Americans and their fellow Jews: A conference takes a look 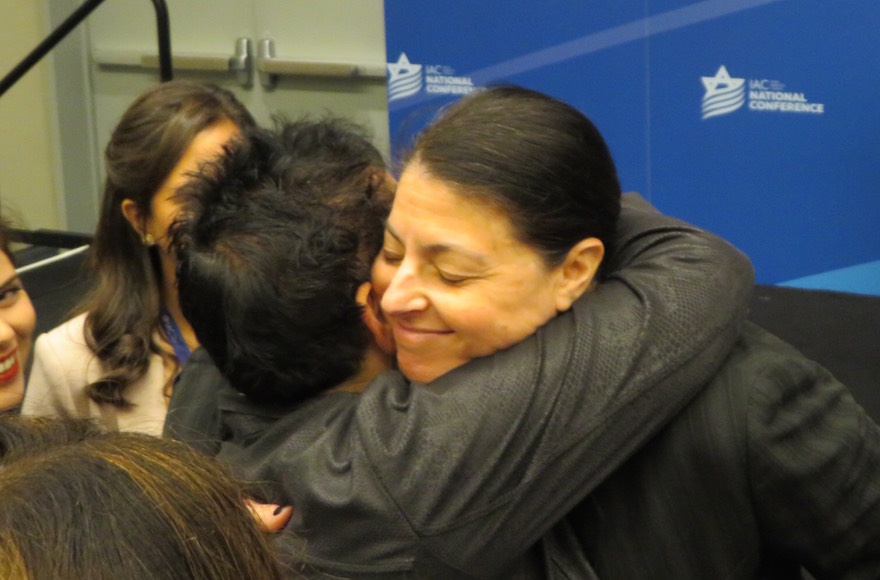 WASHINGTON (JTA) — Not long ago Yahel Epel, a volunteer with the Israeli American Council, fulfilled her assigned mission: She assembled 200 Jews, half of them Israeli American, in a room in Denver on a Friday evening for a potluck dinner and a Shishi Yisraeli program.

Shishi Yisraeli, a program launched by IAC that means “Israeli Friday evening,” seeks a happy medium between what those with and without Israeli roots or backgrounds would enjoy on a Friday night. The idea: Get them together. Create community.

How did it go?

“It was nice,” she said this weekend at the council’s fourth annual conference here, a four-day event that attracted some 2,500 participants.

“It was hard. The Americans couldn’t do the Israeli singing,” the sing-along that for generations have been a staple of secular Israeli life.

“The Israelis didn’t do the kiddush,” the blessing over the wine, a religious ritual that is synonymous with Shabbat.

Shishi Yisraeli was among an array of programs touted at the conference as a means of, as CEO Shoham Nicolet put it in his opening remarks, making Israeli Americans “the ultimate living bridge between Israel and the Jewish people.”

IAC has recorded impressive growth — the group, established 10 years ago, just opened its 16th office, in Atlanta. Claiming to represent between 400,000 and a million Israeli Americans, it offers a range of programs targeting children, teens, college students, young adults, families and businesspeople. (Other estimates put the number of Israelis in the United States as low as 200,000).

Yet there are times the bridge to American Jews that Nicolet longs for seems to be going nowhere, despite the best efforts of the IAC and its principal backers, Sheldon and Dr. Miriam Adelson — the billionaire casino magnate, a major giver to pro-Israel causes and Republicans, and his physician wife.

In anguished and raucous exchanges over shared meals and during breakout sessions organized as circles, Israelis from across North America at the four-day conference described their frustrations in trying to assimilate into the American Jewish community. 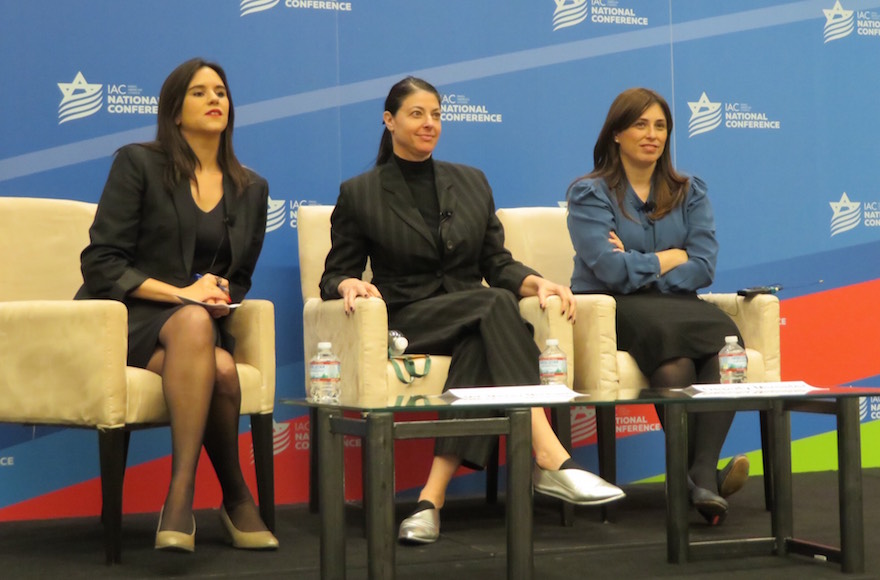 There was the visceral resistance that Israelis have to organizing community life around the synagogue, a mainstay of organized Jewish life in America. Others spoke of the pronounced differences between Israelis and American Jews over what is a threat to Jews. And some had the nagging sensation that American Jews care less and less about Israel — and that those who do pay attention are hypercritical of the country.

But there also were issues and anxieties that Israeli Americans shared with their Jewish brethren that did not exist a generation ago.

One was support for religious pluralism in Israel. Merav Michaeli, a Knesset member from Israel’s opposition Zionist Union, earned cheers and applause during a plenary session when she condemned the Netanyahu government’s retreat from an agreement that would have assured greater equality for non-Orthodox prayer at the Western Wall.

And the crowd booed Tzipi Hotovely, a Knesset member of Netanyahu’s Likud Party, who said secular Israelis did not care about access to the wall.

Until now, the issue has not resonated among Israeli Americans. The change was explained in a follow-up breakout session, in Hebrew: The Israelis who berated Hotovely had come to see the wall as Americans do: not merely a site for traditional (read: Orthodox) prayer, but as a powerful symbol of their love for Israel — even if their attachment to it was not quite, well, American.

Ofira Mor of Tenafly, New Jersey, described a limbo for Israelis in the United States who would have thought of themselves as secular in Israel but seek religious expression here. She wants her three daughters to marry Jews when they become adults.

In Israel, with its vast Jewish majority, Hebrew language and Jewish calendar, Jewish identity is a given. But in the United States, Jewish identity must be sought out either in the synagogue or other Jewish institution.

“I don’t connect with Reform or Conservative prayer, I don’t want to invent a new Judaism,” she said. “I want the Sephardic songs that get you into the mood for Yom Kippur, like ‘El Nora Alila.'”

So Mor said she goes to Chabad, “but it’s not for me. I want my daughters learning from women, about strong Jewish women.”

“We don’t want to look for a religious base, we are looking for a community base,” she said of Israeli Americans. “Here if you want to be part of it” — the American Jewish community — “you have to go to synagogue.”

Nicolet said in an interview that it was critical to get across to Israelis that organized religion was a means of preserving Jewish identity.

“Think about a conference that starts with Havdalah, it’s also a message for us,” as Israelis, he said, referring to the Saturday evening prayer that signifies the end of Shabbat. “It’s a message to Israeli Americans that ‘Listen guys, it’s not sustainable without being connected to Jewish roots.”

The formal launch of the conference Saturday evening was illustrative of the divide between the conference-goers and American Jewish norms.

The crowd shifted nervously during the extended Havdalah prayer sung by Cantor Netanel Hershtik of the Hampton Synagogue in New York, and then silently waited out the American national anthem.

It was when a young woman in the uniform of Tzofim — the Israeli scout movement — mounted the stage that the cavernous hall in the Washington Convention Center filled with sure voices, suffused with tangible relief. This was “Hatikvah.” This was a known quantity.

That was followed by a speech by Nikki Haley, the U.S. ambassador to the United Nations, warmly welcomed because of her outspoken advocacy of Israel. The evening culminated with a round of community singing that had virtually everyone in the hall on their feet and swaying.

There are other aspects of American Jewish self-identity that are jarring for Israelis.

Sivan Benisty of Boulder, Colorado, discovered over lunch that she was sitting across from a non-Jew who worked closely with Jews — Lindsey Horvath, a city councilor from West Hollywood, Florida, a heavily Jewish enclave. Benisty, who works for an Israeli startup in Colorado, grilled Horvath, a Catholic, about how she dealt with Jewish notions of chosenness. 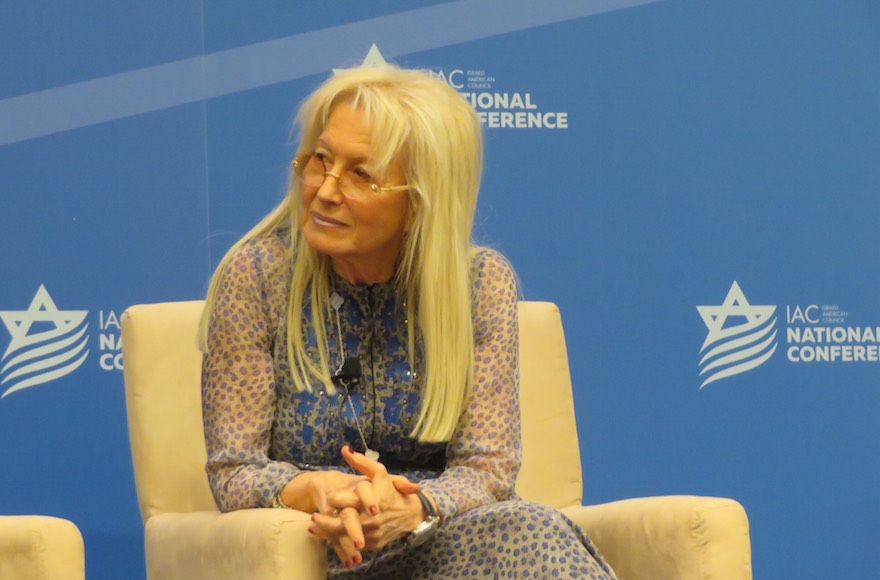 Dr. Miriam Adelson, a major funder of the Israeli American Council, on a panel at its annual Washington conference, Nov. 5, 2015. (Ron Kampeas)

“When I hear ‘Jewish people, chosen people,’ no matter how open and liberal the person, it comes across in a patronizing way,” Benisty said.

Horvath said she sees those expressions as a means of grounding oneself in one’s identity in a multicultural society. She sees correlations to Jewish chosenness in her own identity as a Catholic and as a feminist.

Another gap between Israeli and American Jews was in defining anti-Semitism — an omnipresent theme throughout the conference, but solely in its perceived manifestation in the Boycott, Divestment and Sanctions movement against Israel. The rare mention of the rise of the American “alt-right” drew expressions of nonplussed bafflement.

That was the reaction when Michaeli, the Zionist Union member of Knesset, complained about how Netanyahu was handling the relationship with the American Jewish community. She singled out his reaction to the white supremacist and anti-Semitic demonstration in Charlottesville, Virgina, in August, when a counterprotester was killed by a car driven by a suspected racist.

“The prime minister did not say a word,” Michaeli said.

Neither did anyone in the room, and the moderator, Emily Amrousi, a reporter for the Adelson-owned Israel Hayom daily, shifted the subject back to BDS even though the topic had already been exhausted. Just mentioning Charlottesville in nearly any other American Jewish assembly would have triggered concerns, much discussed in the community, about the boldness of anti-Semitic expression during the presidency of Donald Trump.

Nicolet in the interview said Israelis were likely aware of the Charlottesville march but were more exercised about BDS because it was a more insidious form of anti-Semitism.

“It’s very easy to define the Nazis; they have the flag, they’re Nazis,” he said. “When you have a gray area, and people talk about human rights and ethnic cleansing, from a gut feeling I’m worried.”

Anxieties about whether American Jews are growing distant from Israel also permeated the conference. Ruth Calderon, a former Knesset member for the secular Israeli party Yesh Atid who writes about incorporating Talmudic teachings into secular Jewish education, said the diktats of Israel’s Orthodox could cause a schism.

She led a session that transitioned between Hebrew and English.

“At some point, the Jews in the world will say to Israel, ‘you know what — tistadru lavad,'” figure it out for yourself.

Israeli Jews also recoil at the notion of even tolerating the minority of American Jews who reject Israel.

“I don’t think the undoubted support that American Jews had for Israel 30 years exists anymore,” said Yaara Oren, a postdoctoral biology student at Harvard. “We have a Reform shul” in Brookline, Massachusetts, “doing Naqba events,” she said, using the Arabic for “catastrophe” which is how Palestinians describe Israel’s founding. “I couldn’t step foot in a synagogue that doesn’t support Israel.”

Some also feel Adelson’s leadership has imposed on the IAC a stringent standard of support for Israel that doesn’t gibe with the more diverse and self-critical American Jewish outlook. On Sunday evening, he told the group that he had switched allegiance from the American Israel Public Affairs Committee because he preferred “unequivocal” support for Israel — a reference to AIPAC’s willingness to work with with the Obama administration, which Adelson reviled.

That stringency alienated some of the Israelis at the conference. During a breakout session called “American Sabra: A Complex Identity,” a Brooklyn man confronted Miriam Adelson, who was a panelist, saying that his inclination to criticize some Israeli government policies made him feel like an outsider at the conference.

In response, Adelson insisted that right-wing Jews were likelier to be marginalized in the American Jewish community, but offered this: “The fact that there are people who hate you because of your opinion is very, very bad.”