A ‘Hebrew Hammer’ sequel is coming, motivated by Trump and anti-Semitic Twitter trolls 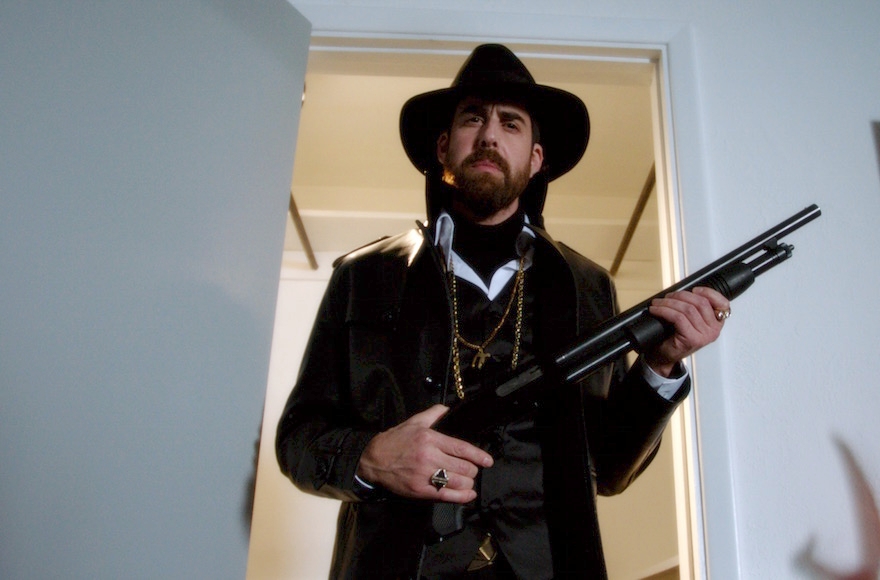 Adam Goldberg as the Hebrew Hammer in a video promoting the sequel's crowdfunding effort. (Screenshot from YouTube)
Advertisement

NEW YORK (JTA) — It took 14 years and a rise in online anti-Semitism, but the Hebrew Hammer is finally coming out of retirement — and he’s picking a fight with Hitler.

No, we’re not talking about baseball players Hank Greenberg or Ryan Braun, both of whom have taken the nickname.

The film has become a cult classic, and its protagonist, who wears a yarmulke and a necklace with a machine gun pendant, has become a go-to symbol of Jewish toughness — something that’s rarely found in the pop culture zeitgeist.

Now Goldberg and his partners think the time is ripe for a sequel, and are turning to a crowdfunding model to get the project off the ground.

Kesselman has wanted to make a sequel for years and even raised $50,000 for one through the Jewish crowdfunding platform Jewcer in 2013. However, Goldberg, who has appeared in films such as “Saving Private Ryan,” “Dazed and Confused” and “A Beautiful Mind,” wasn’t very involved in the effort and the project stalled.

But after Donald Trump’s presidential campaign and what he calls the commander-in-chief’s “daily dose of demagoguery” since the election, Goldberg believed the time was finally ripe to revisit the character. A tipping point came when Trump misunderstood a question about anti-Semitism from an Orthodox reporter at a news conference and told him to “sit down.” 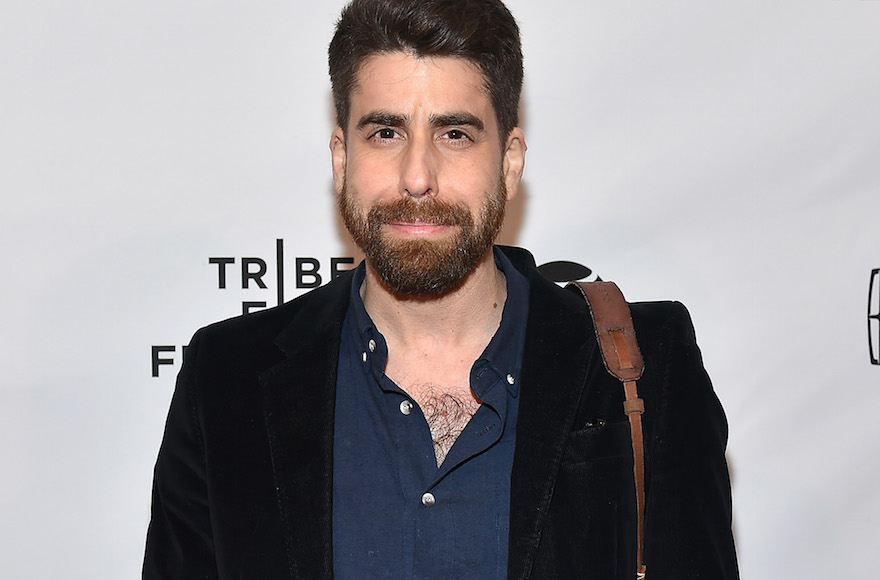 “I had been in a constant state of being nearly apoplectic,” Goldberg said on the phone from Toronto, where a second season of NBC’s drama “Taken” is being shot.

Goldberg first tried talking with the comedy video powerhouse Funny or Die about making a series of short Hebrew Hammer videos that parodied specific developments in Trump’s campaign and presidency. Those never saw daylight, but last month, Goldberg, Kesselman and producer Harrison Huffman launched the new crowdfunding campaign to bring the Hammer back to the silver screen for a full sequel.

The campaign is being run through MicroVentures, a pioneer of the equity crowdfunding model that turns everyone who donates to the project into an investor. With a contribution of at least $100, diehard Hebrew Hammer fans can stand to make at least a small profit from the film should it succeed.

However, Goldberg said the $100 minimum was keeping a lot of fans from donating, so the team is starting a linked sharing campaign through IndieGogo without restrictions and no investment reimbursement strategy. The goal is to raise at least $1 million through crowdfunding and $2 million separately.

Goldberg wouldn’t give away the entire plot of the sequel, whose script is almost finished, but he told JTA that the Hammer will come out of retirement as a crime fighter to travel back in time to fight Hitler. Trump is not mentioned by name, but Goldberg said the script has some “new context” that it didn’t have several years ago, before the real estate magnate became president.

Meanwhile, in the real world, Goldberg is doing some fighting of his own — against anti-Semitic Twitter trolls. Since Trump’s campaign and election victory, many have pointed to a sharp uptick in blatant online anti-Semitism, much of it directed at Jewish journalists and other public figures.

As a result, Goldberg has received plenty of requests from fans on Twitter to reboot the Hebrew Hammer character. But he was also hit with a lot of anti-Semitic rhetoric.

“I would get ‘Hey Jew, we’re preparing an oven for you,’ or ‘Where’s the Hebrew Hammer? We need him!’” Goldberg said.

Many Jews targeted with hate on Twitter write about it or report the trolls to the social media giant, with varied success. In true Hammer fashion, Goldberg prefers to tangle with his digital attackers.

(Fans of the first film may recall a scene in which the Hammer takes on a bar full of neo-Nazis and utters the film’s most famous line.)

“So much of the trolling I got was ‘Oy vey, is Shlomo begging for shekels?’ I’m like, oy vey, that’s a joke? You’re 20 years late on that one, we literally mention shekels in the [crowdfunding] campaign,” he said.

Goldberg calls this generation of white supremacists — many of whom wear what he calls “third-rate J.Crew knockoff” polo shirts — “preppy” neo-Nazis. He thinks about them so frequently that he has contemplated starting a podcast in which he would interview a different one every week.

“You see them arguing with each other about what’s best for the ‘movement,’ and … some are actual self-proclaimed Nazis. [They think] whites should have an ethno-state,” he said. “The whole thing has completely gotten out of f***ing control.” 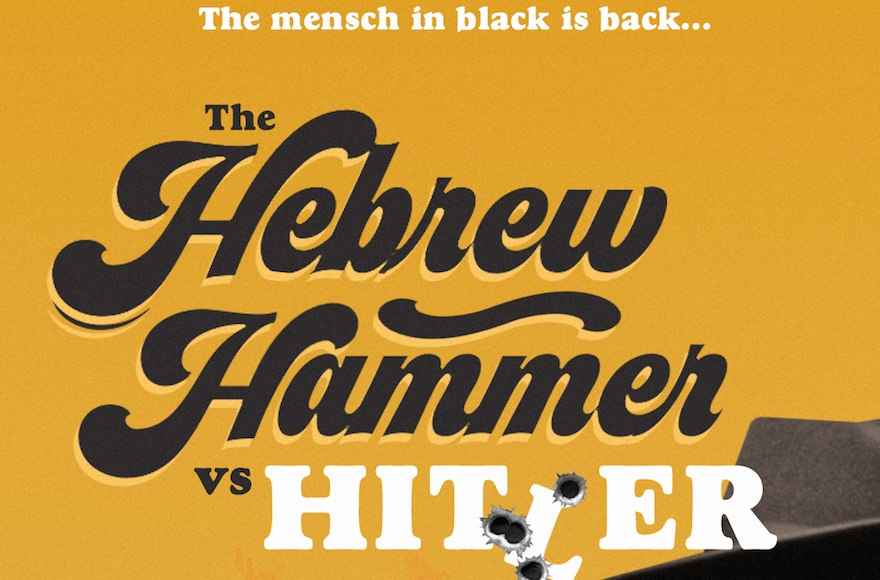 A promotional poster for the sequel. (Adam Goldberg and Roxanne Daner)

The ordeal has reminded Goldberg about what the first “Hebrew Hammer” movie was really about, at least in his view: owning Jewish stereotypes and subverting them. He points to a moment in which the Hammer pauses during an action sequence to pick up a penny, mocking the stereotype of Jews as misers.

Of course, Goldberg — whose father is Jewish and who says he was never religious — acknowledges that overdoing the stereotype humor can fall into unintentional anti-Semitism. Multiple Jewish groups, notably the Anti-Defamation League, were upset with the first film for what they said was perpetuating stereotypes. While the Hammer is tough and cool with his shotguns and cowboy boots, he is also at times whiny and neurotic. His mother in the movie, played by Nora Dunn, is a hyberbolic embodiment of the overbearing Jewish mother stereotype.

However, it’s another common stereotype, one the Hammer character turns on its head, that irks Goldberg the most in daily life.

“I’ve always been wary of saying something like ‘nice Jewish boy.’ That’s something I refuse to say,” he said. “I find it condescending and demeaning.”

Goldberg thinks the Hammer has done more good than harm for the broader Jewish psyche. Recently, a Jewish fan walked up to him and called him his hero.

“The fact is that this thing is fairly ridiculous,” he said, “but it takes on an importance, an inherent social and political importance.”