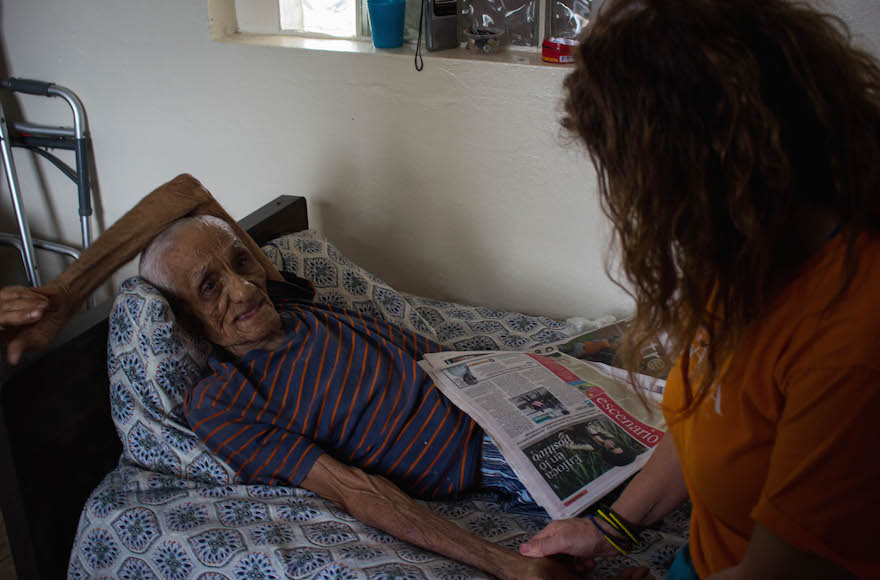 This man lives in a nursing home that has not had power since Hurricane Irma. (Marissa Roer)
Advertisement

SAN JUAN, Puerto Rico (JTA) — “Feeling lucky today?” reads a flier for a casino tucked into the seat pocket of Adolfo Vasquez’s taxi. The car actually belongs to his wife, Vasquez explains. He borrowed hers, which is bigger, to drive a group from the San Juan Airport to the neighborhood where they are delivering humanitarian supplies.

Since Hurricane Maria hit Puerto Rico on Sept. 20, Vasquez only gets about a ride request a day. After work he goes home to a dark house. Power has been out for nearly 50 days, and he doesn’t have a way to refrigerate food. At night, Vasquez, his wife and three sons sleep on the floor, where it’s cooler than in their beds. 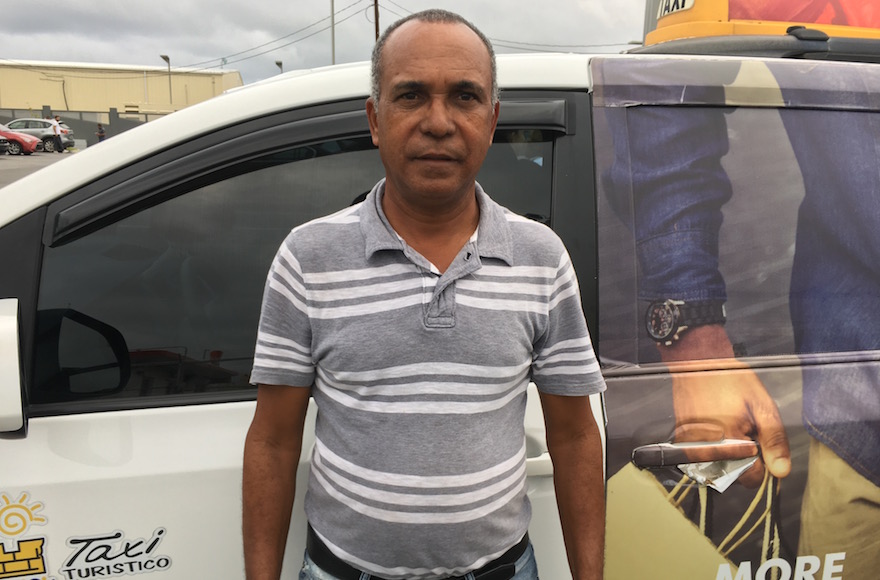 Adolfo Vasquez is a cab driver whose living has been compromised by Hurricane Maria. (Josefin Dolsten)

Like the Vasquez family, the majority of households are still without power since Hurricane Maria struck the island, which is home to 3.4 million U.S. citizens, causing massive destruction and widespread power outages. Some haven’t had power since Sept. 6, when Hurricane Irma hit. Many stores and businesses are closed, leading to shortages in food, basic toiletries and cleaning supplies.

“Puerto Rico is under remodeling,” reads a white flag waving in the wind.

The local Jewish community, which numbers about 1,000 and whose members are mostly well off, did better than most. Many left the island prior to the storm, and the majority of those who stayed behind have generators to provide power. The Jewish community center in the capital suffered moderate damage and has since been repaired.

The community has come together, with the help of the UJA-Federation of New York and its partner organizations, to provide aid to other Puerto Ricans.

“We were very concerned about people suffering because we saw it and at the same time we understood that as a Jewish community we had to lead these efforts. We had to be there,” said Diego Mendelbaum, director of the Puerto Rico JCC. “We call [it] tikkun olam — there was no other way for us to go.”

From above, one can see the damage of Hurricane Maria in Puerto Rico. Blue tarp is used to temporarily repair houses whose roofs were damaged by the storm. pic.twitter.com/DBnKiGYgg5

UJA-Federation, in partnership with the Greater New York Hospital Association and the Afya Foundation, a nonprofit that delivers health care supplies, has sent some 65,000 pounds of humanitarian supplies to the island by way of private jets lent to them by donors.

On Tuesday, seven UJA-Federation staff members and volunteers and the founder of Afya loaded some 2,500 pounds of supplies onto a Gulfstream 400 luxury jet provided by an anonymous donor. The shipment included supplies provided by Afya, such as water bottles, diapers and hygiene products, along with medicines donated by the hospital association, including asthma inhalers, IV fluids and pediatric flu medication. It was the 10th such flight to Puerto Rico since Hurricane Maria hit. (UJA has also flown twice to St. Thomas in the Virgin Islands.)

Local communities are depending on aid from nongovernmental organizations to get by, said Carmen Villanueva Castro, a leader of the Hill Brothers neighborhood in San Juan. 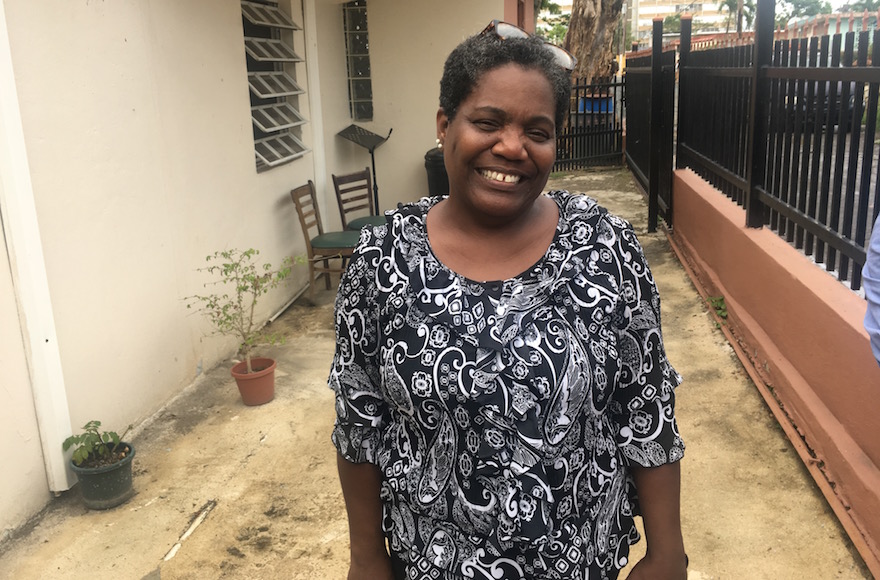 “The help has not come to assist us and provide us with the things we need, so we’re trying to obtain that help in a private manner instead of from the government,” Castro said.

Homes in her neighborhood sustained significant damage from the hurricane, and many lack power. Debris has not been removed in a timely manner.

“Community leaders like me feel frustrated because we cannot help our people,” she said, describing the Tuesday delivery as “a really big miracle.”

On Tuesday, the UJA-Federation delegation visited two nursing homes in the Hill Brothers neighborhood to deliver supplies and meet with residents. Though locals said the nursing homes were usually in bad condition, the storms had only made things worse. One small facility, home to about 10 people, had been without power since Hurricane Irma. They were short on sanitary supplies and residents lay in soiled diapers. Many were weak and unable to communicate.

At a nearby home, Irma Acevedo, 80, was one of many residents suffering from untreated medical conditions. Her foot was badly infected and appeared to be suffering from elephantiasis, a disease that affects the lymph nodes. A representative from Gov. Ricardo Rossello’s office who joined the mission gasped in shock when she saw the old woman’s condition. Yet Acevedo cheered up when the delegation came to greet her, telling them that she loved them. 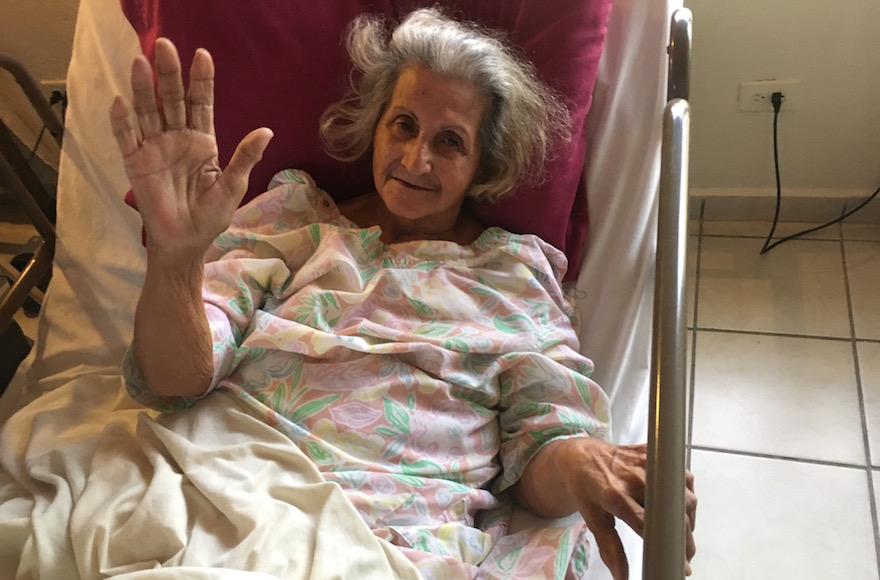 Irma Acevedo, who lives in a San Juan nursing home, is one of many residents there suffering from untreated medical conditions. (Josefin Dolsten)

Mark Medin, UJA-Federation’s executive vice president of financial resource development, described aiding people affected by the storm “an obligation as Jews, as individuals and as an organization.”

“When you see elderly people in a state of utter hopelessness and despair, lying in a bed, unable to leave the bed, with bodies that are literally skin and bones, atrophied away, it rips your heart open and you say, ‘How can I not do something to provide a small amount of relief or support, or help or love or care to these people that are left here with no support system and in very, very poor medical conditions?’” he said. 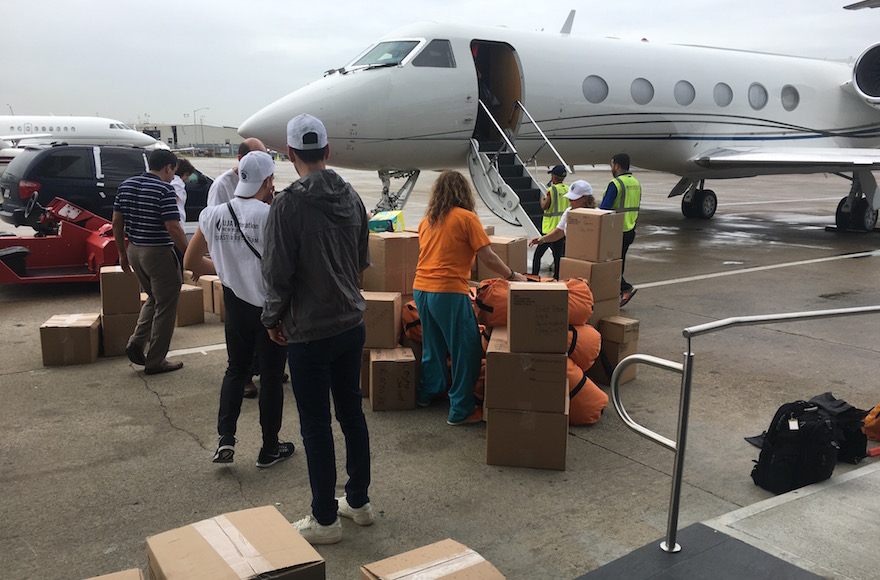 UJA-Federation of New York is working with the Afya Foundation and the Greater New York Hospital Association to deliver supplies to Puerto Rico by way of private jets. (Josefin Dolsten)

Providing hands-on disaster relief is a first for UJA-Federation. The philanthropy usually provides aid by allocating funds to partner organizations, but aid groups were having trouble dispatching supplies to Puerto Rico. UJA-Federation realized it could use private jets provided by donors to deliver resources directly to the island, which is about a 3 1/2-hour flight from New York.

“We had an opportunity to act,” Medin said. A man repairing his house, which was damaged by Hurricane Maria. (Marissa Roer)

UJA-Federation and the JCC in Puerto Rico aren’t the only Jewish groups providing aid. Chabad has also been partnering with relief groups to deliver food, water and supplies to villages hit hard by the hurricane.

“Your neighbors are in need, they need our help. It’s our duty to respond,” said Chabad’s executive director, Rabbi Mendel Zarchi. He had just returned from delivering supplies to some 250 families in a nearby community.

“The Jewish community has been outstanding,” Zarchi said.

Michelle Carlo Newman, a Puerto Rican physician working with UJA-Federation to deliver supplies and evaluate medical needs, said she was proud of the resilience people were displaying.

“She’s a great example,” Carlo Newman said, referring to Castro, the neighborhood leader. “She’s a community leader that could be crying in her room about what’s going on. You saw her house, it’s half destroyed, but she’s like, ‘Let’s get people here, let’s get help here.’” 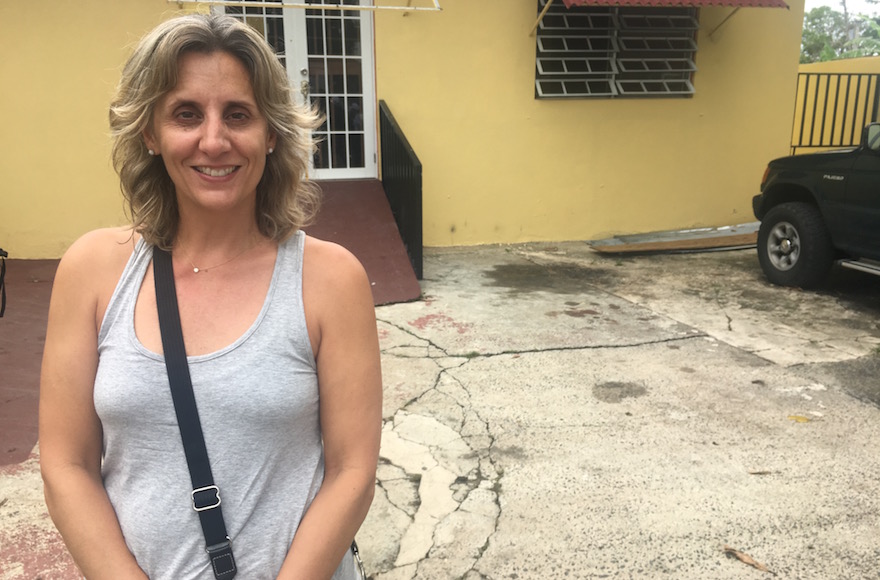 Michelle Carlo Newman is a Puerto Rican physician helping to provide relief to those affected by the hurricane. (Josefin Dolsten)

But Carlo Newman, a mother of two who has relied on a generator to provide power since Hurricane Irma, also expressed disappointment at the lack of response from the U.S. government.

On Tuesday, the head of a federal control board that oversees Puerto Rico’s finances told Congress that the U.S. territory still needs assistance “on an unprecedented scale” to restore housing, water and electric power.

“Part of me is sad that we’re American citizens and we have to live like this,” Carlo Newman said.