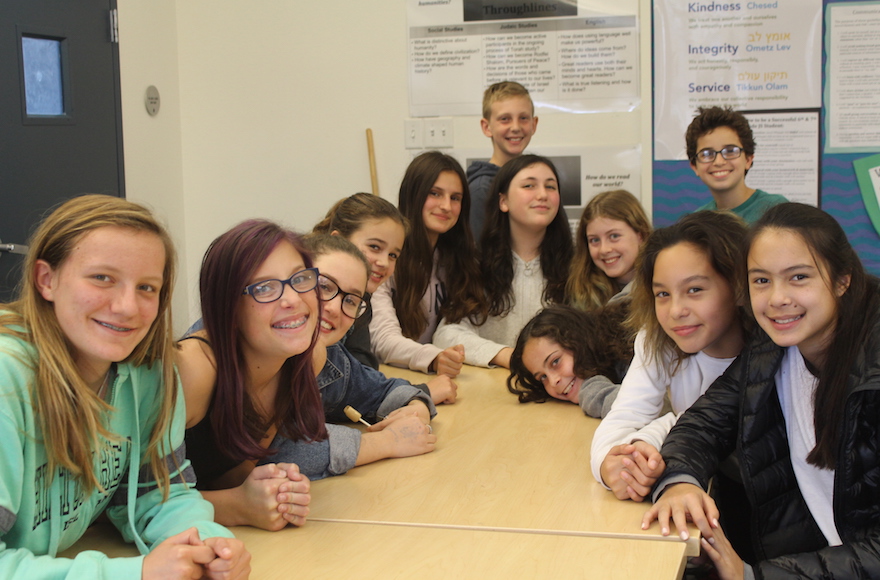 The members of the Brandeis School's 2017-18 seventh grade class said they appreciated hearing from a range of nonprofits in their city. (Ben Sales)
Advertisement

Maymon and Shvartzman asked all the right questions, like what percentage of the group’s budget was used for overhead and how it planned to spend the money. They had looked up its financials on GuideStar, a database of nonprofit files.

So, perhaps not surprisingly, the two 13-year-olds were irked when the official giggled and rolled her eyes at them.

“She didn’t think of us as a serious thing,” Maymon said of the staffer. “She was giggling at some of the questions even though it was pretty serious.”

It might have been because Maymon and Shvartzman were in seventh grade at the time, and they were offering several hundred dollars from their bat mitzvah money. (Larkin Street Youth, which did receive the donation, told JTA in an email that the officials who spoke with the students respected them and thought they were “amazing” and “asked great questions.”)

The two teens are students at the Brandeis School of San Francisco. At this community Jewish day school in an upscale residential neighborhood, the seventh graders become a mini-charity of sorts: Rather than depositing their bar and bat mitzvah checks into the bank, the kids and their parents agree to take the money they would have spent on each other’s gifts and collectively donate it.

Each year, the bar/bat mitzvah class takes its pool of money — generally around $30,000 — and allocates it to some 20 nonprofits in the Bay Area, with causes ranging from medical research to Jewish LGBT advocacy. The kids vote on the top five groups. Those charities receive $5,000 each, with the rest divided among the remainder of the organizations.

While remarkable, these young do-gooders are far from alone: Teen philanthropy is a growing trend in the Jewish community. According to the Jewish Funders’ Network, U.S. Jewish teens gave more than $1 million in total during the 2015-16 school year.

“That’s a reflection that teens are continuing to develop their identities,” Briana Holtzman, the director of the Jewish Teen Funders’ Network, an umbrella for programs like the Brandeis School’s, told JTA in March. “They can give to the Jewish community and they can serve those outside of the Jewish community. There’s a real focus on the conversation, on challenging our teens to grapple with who they are.”

At the Brandeis School, which has run this program for about 30 years, the goal is to teach the kids the value of charity and make giving part of their lives from an early age. Jody Bloom, the Judaic studies teacher who runs the program, said it’s an especially valuable lesson for 13-year-olds, who can be consumed by obsessions over appearances, school or their latest crushes. 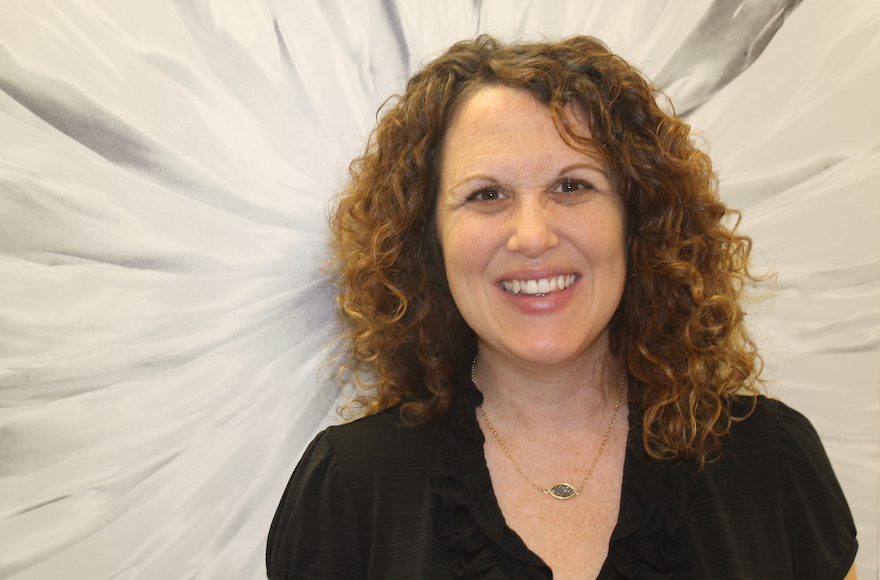 Jody Bloom, who runs the charity program, says it teaches students the importance of philanthropy while keeping their middle school drama in perspective. (Ben Sales)

Learning about the work of aid organizations, she said, makes them realize those problems aren’t so bad.

“It really helps the kids put things in perspective,” Bloom said. “They don’t see the need that’s out there when they’re in the school. When they go out in the world and see what’s needed, they feel so grateful for what they have.”

The charity program, called Tzedek – Hebrew for “justice” – takes up the bulk of the seventh-graders’ Judaic studies classes, which meet three times a week for about an hour. In the first semester, the students hear a weekly lecture from a local aid organization about its work. This school year, the speakers ranged from Jewish Vocational Services, which helps the unemployed, to the Homeless Prenatal Project, which aids parents of poor children.

Several current seventh-graders said they especially appreciated a lecture from Gene Goldstein-Plesser, an official at Keshet, the Jewish LGBT advocacy organization. The talk included a cartoon unicorn whose body was used to explain the ideas of gender and sexuality. The heart, for example, corresponded to physical and emotional attraction, while a thought bubble with a rainbow was meant to symbolize how one thinks of their own gender identity.

“We’re in San Francisco, so we know a lot of gay and lesbian people,” Noa Marks said.

The program kicks into high gear in the spring. The students pair off according to areas of interest — fighting racism, for example, or promoting animal welfare — and then choose one nonprofit they want to research. The organization doesn’t need to be Jewish but must be local because Bloom wants the kids to visit the group and get to know its work. They go to the nonprofit and interview a senior employee before presenting the organization’s work to the rest of the class.

Although the students come from a range of socioeconomic backgrounds, the K-8 school exudes affluence. The campus consists of connected buildings for its 400 children, with open-air walkways and courtyards featuring bright basketball courts and playgrounds. Kids sprawl in the hallways typing on MacBooks and sitting on couches with coffee tables. A bowl of fresh apples for the taking sits on a table in a first-floor hallway. Tuition this year is about $31,000 — slightly more for eighth-graders — with about 30 percent of families receiving financial aid.

The kids say the philanthropy program helps them see beyond their own material comforts.

“I went to a public school [previously], and this wasn’t a thought,” said Avital Daly, regarding charity work. “It was like, keep yourself safe and do what you need to do. Helping other people wasn’t as important as helping yourself. It’s a good feeling to help people.”

The students also do a range of charitable activities, from volunteering at a home for the elderly to reading to underprivileged second-graders. In class, they look at Jewish texts on giving — like Maimonides’ seven levels of charity, which instructs Jews on how best to help the poor, with teaching someone a trade the highest ideal. And they discuss the dilemmas inherent in philanthropy, like whether it’s better to give locally or globally, and whether Jews have a special responsibility to give to Jewish causes.

As they approach their second semester, this year’s seventh-graders appear divided on that issue.

About a quarter of the groups that receive money end up being Jewish, according to Bloom. But, she points out, supporting Jewish (or non-Jewish) causes isn’t the point. She wants kids to understand that part of coming of age as a Jew means taking responsibility for the people around you.

“What does it mean to be a member of the Jewish community?” she asked. “The obligation of everyone [is] to do justice. It’s not just giving money, it’s giving your time. It really impacts them in a way they haven’t felt before and they realize how much they can give.”