After surviving Hurricane Harvey, this woman distributes mezuzahs to those who need them (JTA) — As Hurricane Harvey swept over Houston, Chava Gal-Or counted herself lucky. The water rose up to her door and a little bit seeped in, but her home did not flood.

However, many in the Reform synagogue where she works had it much worse: Twenty-nine families lost their homes — about 15 percent of the congregation’s members.

At first, Gal-Or despaired the extent of the damage and how little she could do to help.

“I can’t rebuild their houses,” said Gal-Or, the director of congregational learning for the Texas city’s Temple Sinai, told JTA. “I don’t have the money to do much. There was this increasing awareness that there was nothing I could do.”

But what she could do, Gal-Or realized, was help her neighbors make their temporary homes and (eventually) their rebuilt homes feel Jewish. She began collecting mezuzahs — the small scrolls traditionally affixed to the doorposts of Jewish dwellings — to distribute free to Jewish hurricane victims.

Thus the unofficial organization Door L’Door was born. The name is a play on the biblical phrase “l’dor v’dor,” which means “from generation to generation.”

Gal-Or, 51, was hoping to find a couple parchments for close friends. But a public Facebook post quickly led to an outpouring of donations. Two months after launching the effort, she has raised nearly $300 to purchase mezuzahs and has received some 120 donated scrolls. The Jewish United Fund, Chicago’s Jewish federation, sent 100 scrolls and cases. She also got donation pledges from synagogues in Texas, Delaware and Arizona, as well as the University of Arizona Hillel. Two artists volunteered to fashion mezuzah cases.

“It literally took on a life of its own,” she said. “This is becoming my passion. Every day, something new comes up.”

Mezuzahs are traditionally small squares of parchment inscribed with the first two paragraphs of the Shema prayer. The parchment is then rolled up, ensconced in an oblong case and nailed to the doorpost. Prices vary, though they typically start at around $36, according to Gal-Or, and go up. 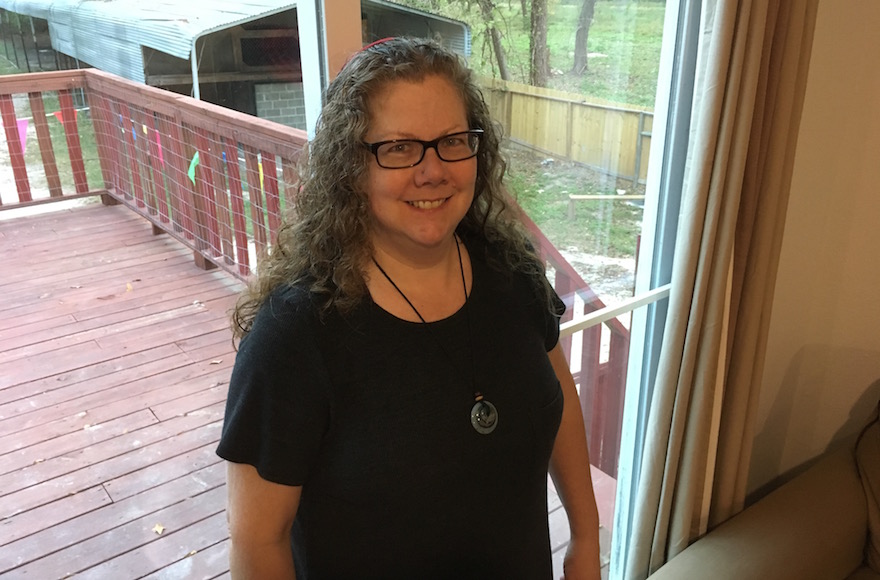 What’s special about mezuzahs, Gal-Or said, is they are a uniting thread across a diverse and often divided Jewish community.

Gal-Or works on Door L’Door — coordinating donations, spreading the word on social media — only on Mondays, when she’s not working at the synagogue. It’s a tricky balance; she also is recovering from a respiratory infection, caused by the hurricane, and is busy helping friends put their lives back together. She hopes to register it as a nonprofit soon.

So far, Gal-Or has received about 20 requests for mezuzahs —  most people affected by the storm are still fixing their homes, she said. But in the meantime, natural disasters have struck elsewhere —  for example, Gal-Or has been in touch with Congregation Shomrei Torah, a synagogue in Santa Rosa, California, whose members endured the recent wildfires.

She also has fielded requests for other ritual objects. Shomrei Torah asked about prayer shawls, and she came up with a couple dozen she plans to send. Thinking ahead to next month, she is asking for donations of spare Hanukkah menorahs.

“This started because of Harvey, but I knew immediately that I wanted to be able to help any Jewish home that was destroyed,” Gal-Or said. “We had [a hurricane in] Florida right after us. We had earthquakes in Mexico. A lot of stuff is going on.”