The 5 weirdest kosher foods you’ll be eating in 2018 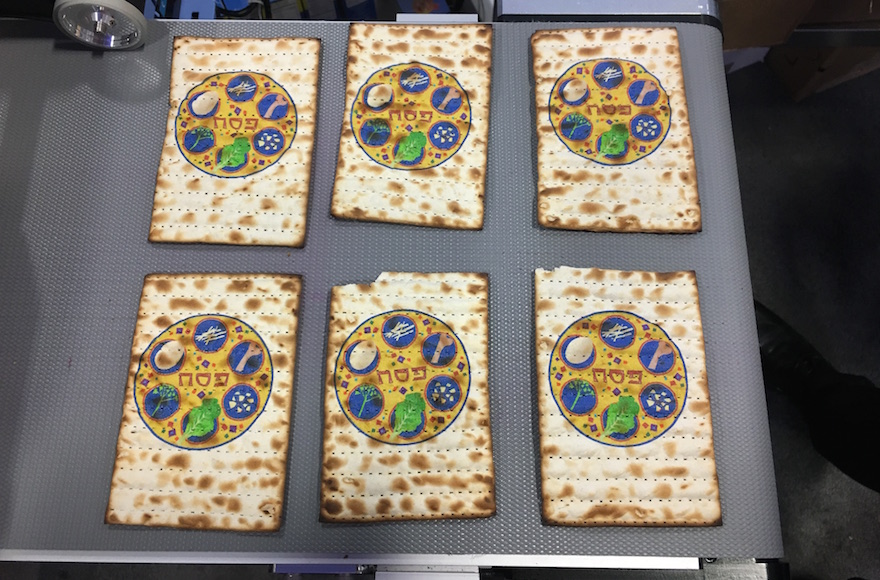 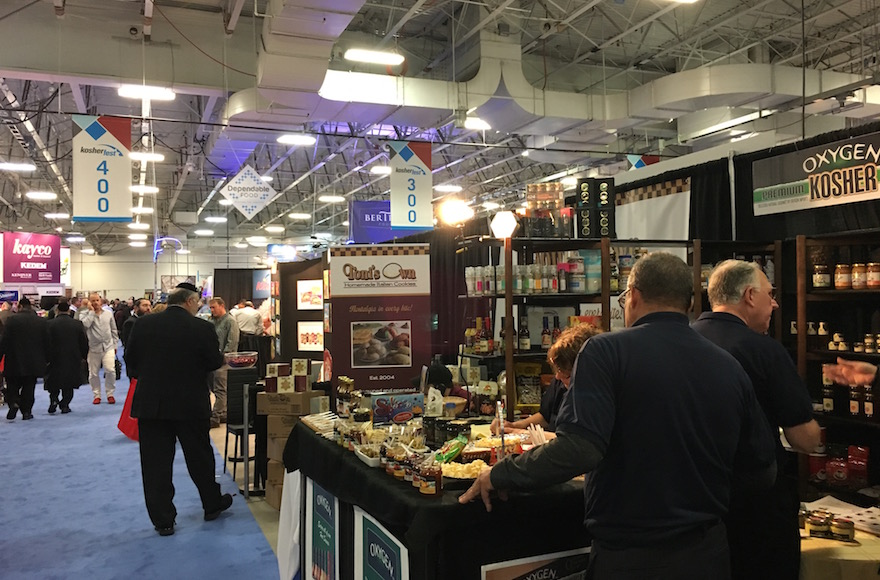 That may seem like an unusual warning outside a convention center, but to the crowd attending the food expo there on Tuesday, it made sense: Kosherfest is the world’s largest kosher food trade show, where the vast majority of those attending follow the Jewish prohibition against mixing meat and dairy.

More than 4,000 food industry professionals gathered for the annual two-day event, which featured more than 325 vendors showcasing an array of products, from candy to wine.

Naturally, there were lots of samples.

Reporting can be a tough job, but somebody had to taste everything. Amid the offerings of many obvious treats (lox varieties and bagel flavors, for example), there were some surprises. These are the five most unexpected foods and beverages JTA sampled at this year’s Kosherfest.

Matzohgram, which was crowned by Kosherfest the best Kosher for Passover product, is matzah printed with Jewish-themed patterns, such as Stars of David and Passover greetings. The manufacturer, Independent Ink, uses colorful, edible ink that is kosher for Passover.

Customers placing large orders can also customize matzahs with any image they desire.

“It gives you the ability to be creative for your seder plate,” said NK Ranganathan, Independent Ink’s chief operating officer. “You can have a variety of designs, and it becomes very interesting for the kids.”

Customers can buy Matzohgram online beginning Nov. 20: It’s $10 for a box of mini-matzahs and $16 for the regular size.

Cool video of printing patterns onto matzahs from my visit yesterday to @Kosherfest. pic.twitter.com/9pso4v0Y3S 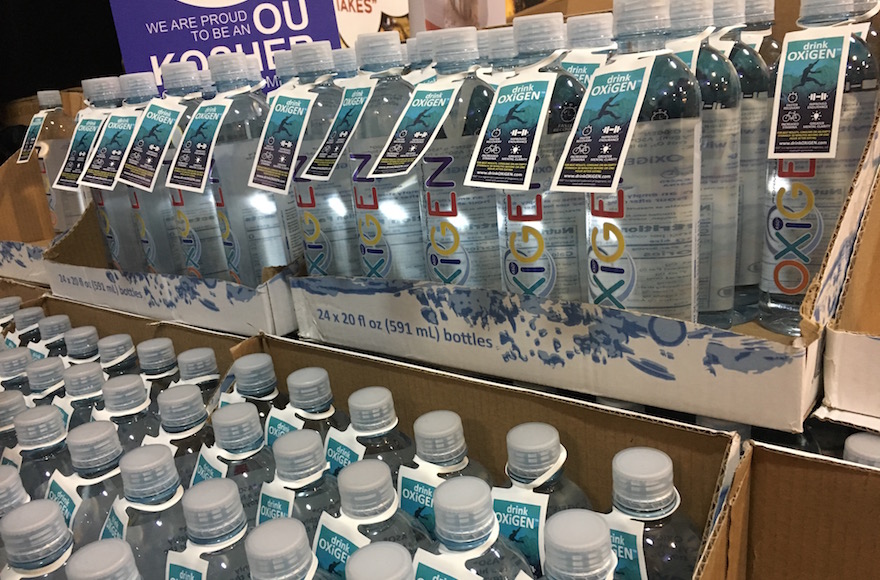 If Oxigen’s claims about its water — that it improves both post-workout and or post-hangover recovery time and mental clarity — are true, then Gatorade may have some serious competition.

“When you drink the water, the oxygen gets into your bloodstream and goes to work immediately to aid in focus, recovery, endurance and stamina,” Max Lewis, director of sales for Formula Four Beverages, told JTA.

The oxygen is not in gas form, meaning it won’t escape the bottle when it’s opened, Lewis added. 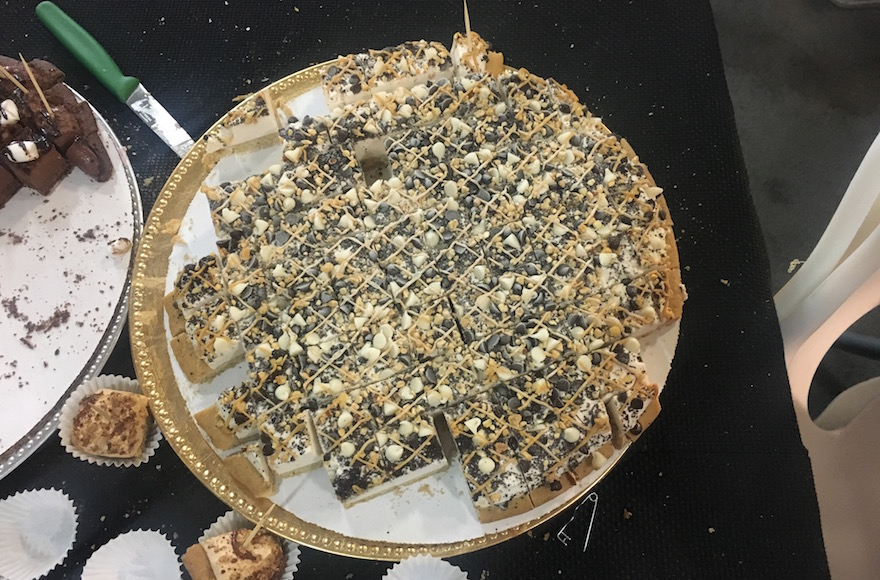 “Everybody, when they come over, they go crazy about it because it’s entertaining, it’s fun, it’s different,” said Benjamin Weisz, president of Elegant Desserts based in Brooklyn.

At Kosherfest, the frizzas were cut into bite-sized squares, but they are meant to be served by the slice, like a pizza. Each pie contains eight to 16 servings, depending on how it’s sliced.

Elegant Desserts, which sells frizzas online for $36.50 each, also sells the pies in flavors such as cookies and cream and strawberry. 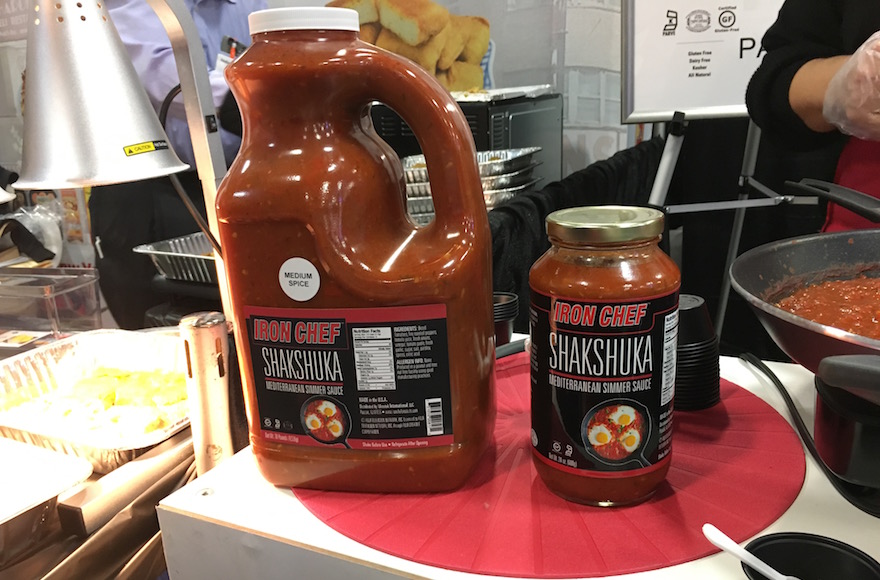 Cooks need only add eggs to this sauce to make shakshuka. (Josefin Dolsten)

Craving shakshuka but short on time?

This sauce is perfect for any busy person who loves this Israeli breakfast food, which consists of eggs cooked with spices in tomato sauce. To make this version of the hearty dish, one only needs to open a jar, crack a few eggs and cook the delicious mess on the stovetop or in the oven.

“It makes it very quick,” said Tami Bezborodko, vice president of marketing for Iron Chef. “In seven minutes you can have a nice, hot breakfast.”

The sauce contains tomatoes and spices and comes in mild and medium spicy varieties. A 24-ounce jar retails in stores nationwide for around $4.50. 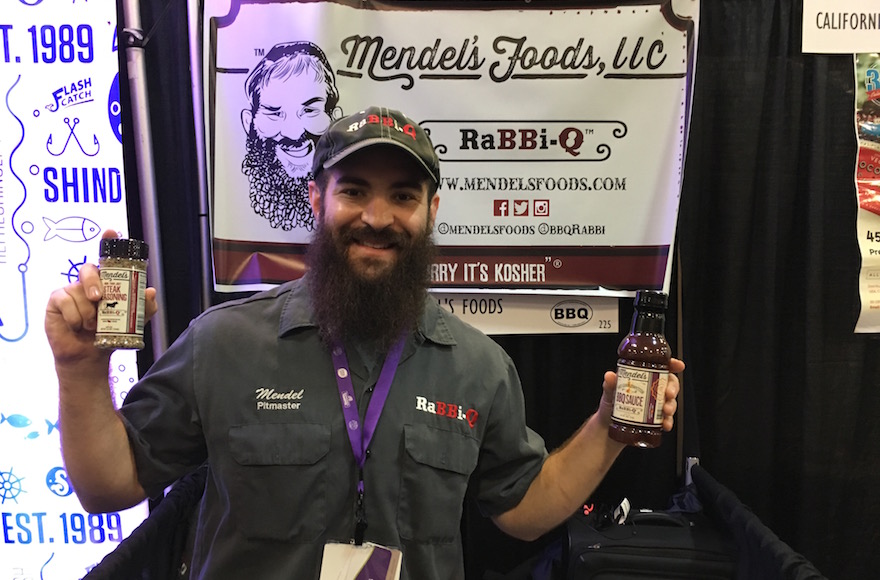 Want a barbecue with a rabbinic seal of approval? Look no further. Rabbi Mendel Segal, who founded the Kansas City Kosher BBQ Festival, now offers three varieties of his RaBBi-Q sauce. Since launching in 2015, Segal has expanded his line of sauces to include flavors that draw on both his Jewish and Southern roots — the pomegranate honey barbecue sauce, which Segal came up with when making brisket for Rosh Hashanah, is a favorite.

“It sells really well in the non-Jewish market, too, because nobody has a barbecue sauce that flavor yet,” he told JTA. “But Jews catch onto it right away.”

An 18-ounce jar of sauce retails at select kosher markets nationwide for $4.99.