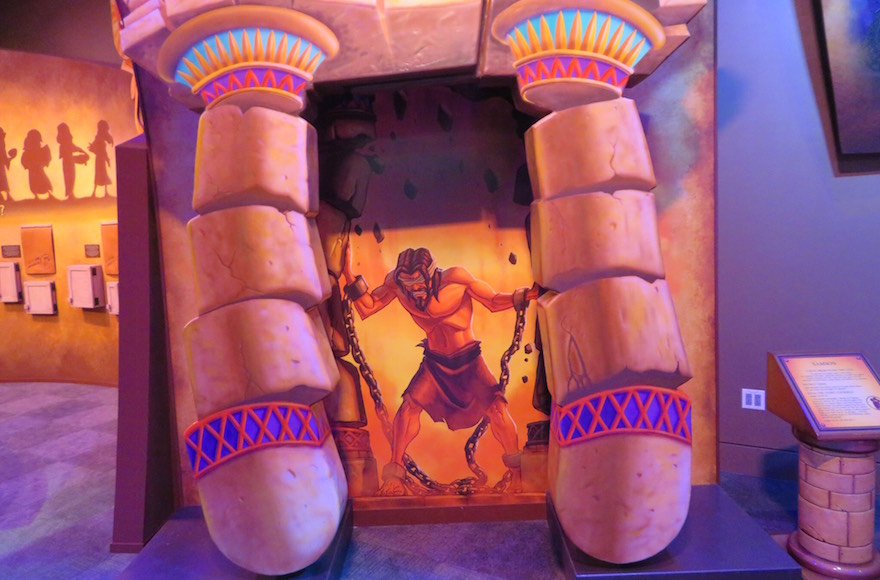 Kids can be Samson bringing down the walls at Courageous Pages, the Museum of the Bible's play area. (Ron Kampeas)
Advertisement

Kids can be Samson bringing down the walls at Courageous Pages, the play area at the new Museum of the Bible in Washington, D.C. (Ron Kampeas)

WASHINGTON (JTA) — As the Burning Bush crackles, God is heard.

“Mow-zes,” God says in the mysterious mid-Atlantic accent that Hollywood once trained its actors to use — the one Anne Baxter as Nefertiti used to summon Charlton Heston’s Moses in the 1956 blockbuster “The Ten Commandments.” “Mow-zes, Mow-zes.”

That epic, earnest and seemingly endless film has much in common with the Museum of the Bible, the $500 million extravaganza gifted to the National Mall by one of America’s leading evangelical families, the founders of the Hobby Lobby chain.

The museum celebrates Jews and Judaism as the noble, beloved and even feared antecedents to Christianity, and argues that its best modern expression is in the State of Israel. And it makes the case that the Bible is not merely to be studied but to be believed.

Speaking at the dedication Friday, Steven Green, the president of Hobby Lobby and the museum’s chairman of the board, said museumgoers should come away realizing that the Bible “has had a positive impact on their lives in so many different ways and when they leave they will be inspired to open it.”

It especially celebrates the Bible’s Jewish origins, notably those made manifest in modern Israel. The dedication included a rabbi, Israel’s ambassador to the United States, the Israeli minister of tourism and the director of the Israel Antiquities Authority.

At times, the event seemed like a pro-Israel gala. Ron Dermer, the Israeli ambassador, celebrated the museum as a signifier of the Jewish claim to Jerusalem. The Bible nurtured Jews through 2,000 years of exile until they were able to “rebuild the original DC — David’s Capital,” he said.

Yariv Levin, the tourism minister, read a letter from Prime Minister Benjamin Netanyahu, who sent “warm greetings from Jerusalem, the eternal and undivided capital of Israel.”

The deference to Judaism is evident in the museum logo, a B flat on its face resembling the tablets of the Ten Commandments, and the museum store, where Star of David pendants glitter next to crucifixes. If you have $80 to spare, you can choose a crucifix or Hanukkah menorah made from Jerusalem stone facing each other on the same shelf.

The museum also makes the Bible as unmistakably American as someone named, well, Charlton Heston. One permanent exhibit is dedicated to the biblical underpinnings of the abolition of slavery and of the civil rights movement.

The U.S.-born Dermer picked up on the theme of his native land as a nation whose origins were in the Bible.

“Those ideas inscribed in your founding documents and etched on your statues are not merely the values of America, they are the values of the Bible,” he said in his address.

Scholarship at the museum is pervasive, but employed a la Cecil B. DeMille: to prove the Bible is not just compelling but true. 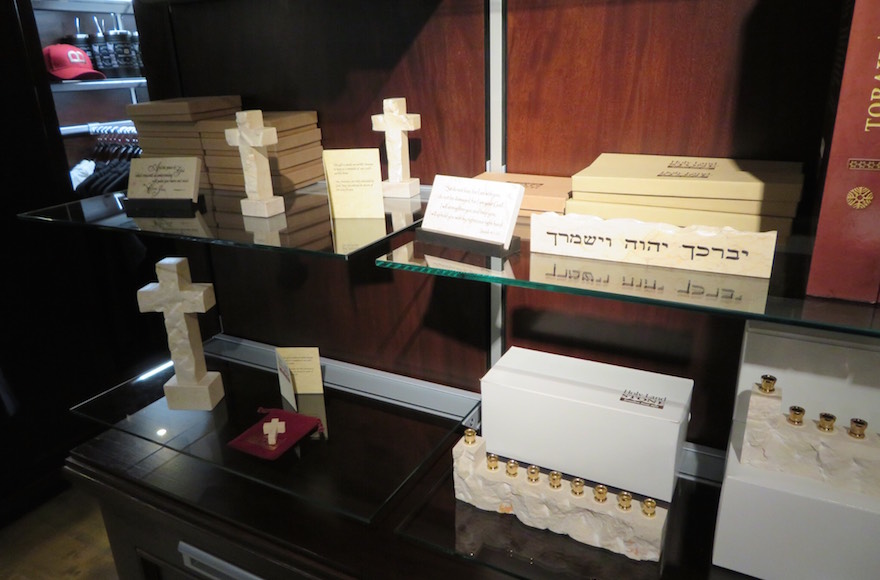 A day at the museum — officials say a thorough tour would take 72 hours — may leave you smarter about the Bible’s origins, the stated agenda of the museum. But you may also suspect that the goal of this newfound knowledge is not to encourage critique but belief. The approach is closer to seminary than religious studies department.

Executive Director Tony Zeiss was unambiguous about the museum’s desired effect at the dedication ceremony.

Designers of the museum, he added, had two overarching criteria: “Will this lift up the Bible, and will it lift up people?”

The museum employs scholarship to make that case.

“We engaged leading scholars around the country,” Green, the scion of the family that runs the Hobby Lobby chain, said Wednesday in a news briefing.

But scholarship alone wouldn’t sell it, so like most contemporary museums, there are plenty of experiential exhibits.

“If you put a Bible under a glass case in a language I can’t read, it will only hold my attention for so long,” Green explained.

Judaism as parent suffuses just about every exhibit, including one that media and special guests walked through earlier this week: The Hebrew Bible. It’s an immersive 30-minute stroll through animations and special effects illustrated by supple, handsome animated Hebrews. (The Burning Bush, a riot of bright yellow light in a darkened room, was genuinely thrilling.) That’s more than twice as long as the 12 1/2-minute immersive New Testament experience.

On the fifth floor of this six-floor mammoth comprising much of a Washington block are artifacts contributed by Israel’s Antiquities Authority. The exhibit is permanent, but the Israeli authority will rotate the items about 1,500 at a time.

The debt to Judaism is seen in the kosher-style food at Manna, the rooftop restaurant run by a couple who wrote “The New Jewish Table” cookbook. (Two kosher items per meal will be available at the restaurant.)

Judaism and its origins in Israel are evident as well in a temporary exhibit, through May, organized by Jerusalem’s Bible Lands Museum, which served as a consultant to the D.C. museum. 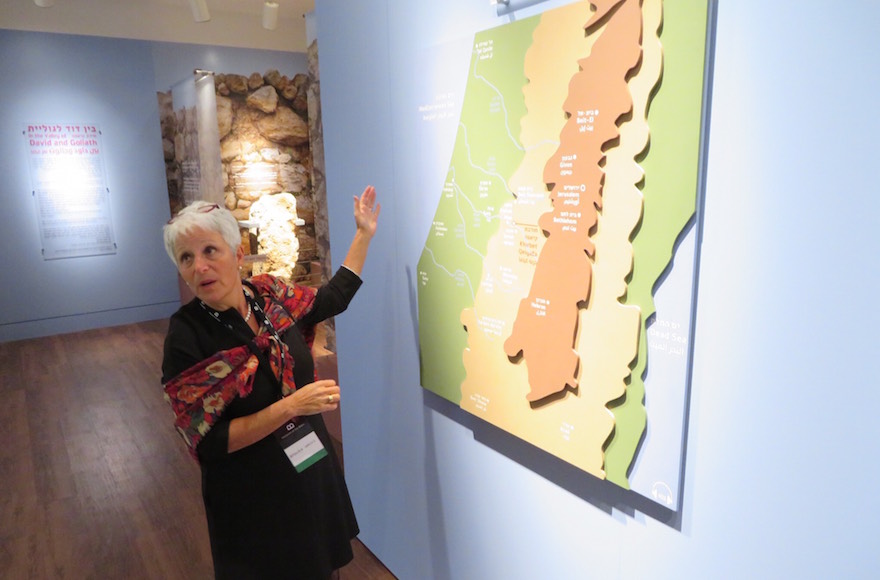 Amanda Weiss, the director of the Bible Lands Museum in Jerusalem, leading a tour through an exhibit her museum is lending to the D.C. museum. (Ron Kampeas)

It is there that one gets to the crux of what makes this museum different from all others. An exhibit of finds from Khirbet Queiafa, a village dating to the time when King David is purported to have ruled, begins with a replica of the Tel Dan Stele. The stone table validates, to a degree, the historical accuracy of the battle of Jezreel, where Yoram, king of Israel and Ahaziah, king of Judah were killed, as recounted in 2 Kings 9.

The stele is important because it contains the oldest reference to King David, who lived two centuries or so earlier. It establishes that David was likely a real person.

But it also diverges from the Bible, crediting Hazael, an Aramaic king, and not Jehu, Yoram’s successor, with the victory.

The real stele is at the Israel Museum in Jerusalem, where a docent will explain how the radically different accounts at once validate the ancient Jewish presence in the land — but reinforce the notion that the Bible is less revealed truth than it is a political document written by the ultimate victors.

In this exhibit, the accompanying text refers only to a “different version” appearing in the Bible. MiYoung Im, the museum’s antiquities curator who trained first as a theologian in Korea and then in Israel as an archaeologist, said she appreciated the stele both as a Christian and as someone trained to view artifacts as a scholarly outsider.

Nonetheless, she said, the significance of the stele for the new museum was not in how it differed from the Bible, but how it validated it.

“We want to show how this exhibit relates to the time of David,” she said. “We can’t prove where David lived — we can show that he lived.”