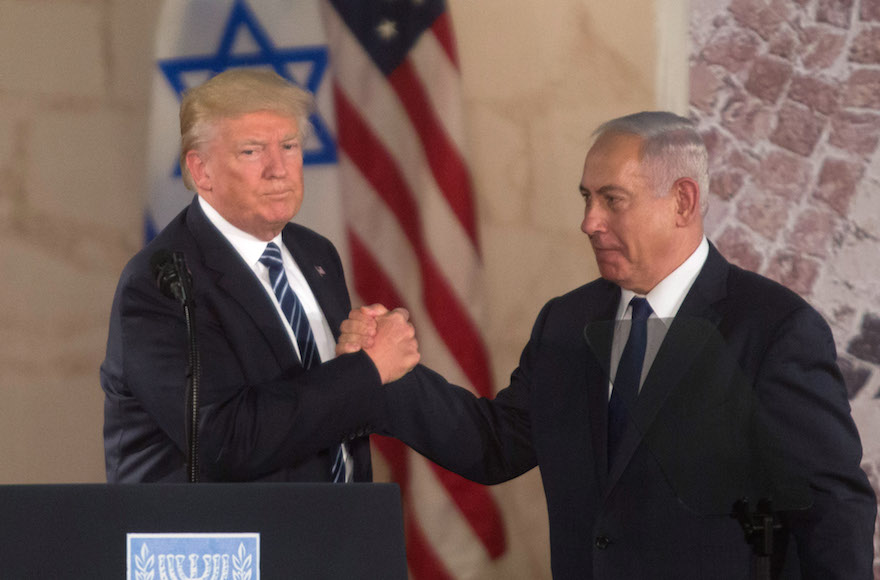 However, that has not kept Israeli officials from setting conditions on any future negotiations.

Israel’s Hadashot news reported Saturday night that the Trump administration’s peace plan will recognize a Palestinian state, but will not insist Israel uproot any settlements in the West Bank. It also said Washington will back most of Israel’s security demands.

According to the report, Trump will “not necessarily” ask Israel to negotiate based on its borders from before the 1967 Six-Day War, when it conquered the West Bank.

Hadashot quoted what it said were senior Israelis involved in the ongoing discussions with Trump’s peace team, which was first reported to be drafting a peace plan earlier this month. Saturday’s report said the plan will be presented within months.

In response, a White House official told Hadashot news it was “speculative” and “not necessarily accurate.” The source said “a lot of ideas” are being considered as part of a novel approach to peace and that no artificial deadline or terms would be imposed on the parties.

As for Israeli Prime Minister Benjamin Netanyahu, the report said he was pushing for Israel to maintain security control over all of the West Bank — something he has publicly demanded. It said Netanyahu told his ministers that Israel could not afford to reject Trump’s peace deal, which would be the best offer the Jewish state would ever get.

Indeed, no previous president has agreed to let Israel leave the settlers in place, and former U.S. President Barak Obama said peace negotiations should be based on the 1967 lines. But Trump has previously said he was not wedded to the two-state solution.

The Prime Minister’s Office responded Saturday that the Hadashot report is “not accurate.”

On Sunday, Netanyahu said he would react to the plan based on Israel’s “security and national interests,” which he said Washington already understood. According to Israel’s Channel 10 TV news, Netanyahu also said that Israel would not negotiate with the Palestinians as long as Hamas is allied with Fatah. The two Palestinian groups have been moving toward reconciliation.

Despite the American and Israeli denials of the report, several Israeli ministers and lawmakers made clear they would not abide Israel’s recognition of a Palestinian state. Agriculture Minister Uri Ariel pledged to leave the governing coalition over the issue, and suggested lawmaker Betzalel Smotrich, the other member of the extreme faction of the hawkish Jewish Home party, would join him.

Although the two men alone could not bring down the coalition government, Ariel said other members of Jewish Home and the ruling Likud party who have “made clear that they will not agree to transfer swaths of land to the Palestinian Authority.”

As co-chairs of the Knesset lobby for the Land of Israel, Smotrich and Likud lawmaker Yoav Kisch said that “under no circumstances will we agree to the establishment of a Palestinian state on this side of the Jordan river,” meaning in the West Bank.

Hadashot reported that Trump’s plan will allow Israeli troops to remain along the Jordan border. The report said the plan will not address moving the U.S. embassy to Jerusalem, as Trump promised during his presidential campaign, or recognition of Jerusalem as Israel’s capital.

To encourage Palestinian Authority President Mahmoud Abbas to accept the deal, the report said, Sunni Arab states and others will provide hundreds of millions of dollars in economic aid to the Palestinians.