Can a Jew from liberal Miami Beach be Florida’s next governor? Philip Levine is betting yes. 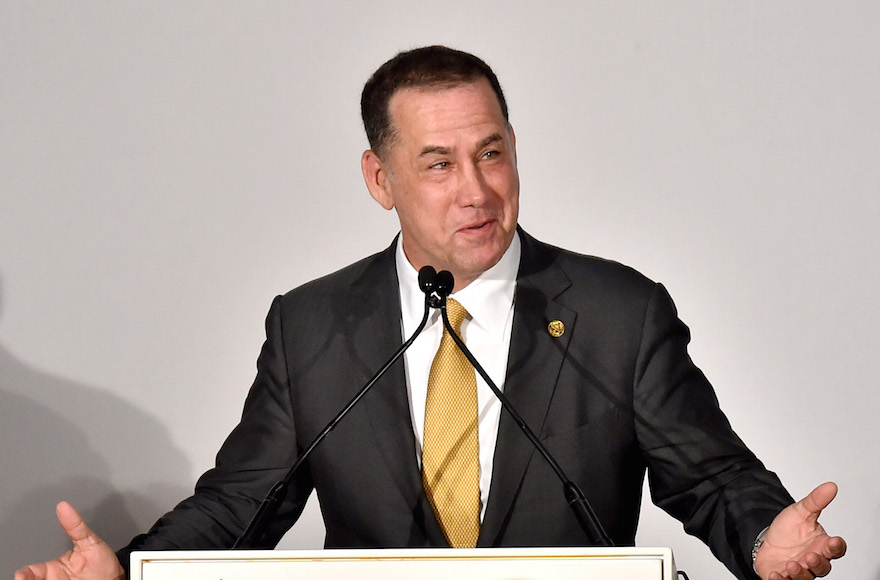 MIAMI (JTA) —  One candidate for governor is a former congresswoman and the daughter of a former governor and U.S. senator. Another candidate is a mayor who grew up in a blue collar African-American family. A third political newcomer is a Harvard graduate who builds affordable housing.

Florida has been known as a place where candidates of diverse backgrounds make a name for themselves. But in statewide races it generally hasn’t included Jews, at least in recent decades.

Former Miami Beach Mayor Philip Levine, a wealthy businessman with a knack for drawing attention to himself and his city’s struggles with climate change, is hoping to become the exception. With Florida set to elect a new governor in 2018, Levine is the only candidate among the serious contenders who is Jewish.

While some political observers question whether a Jew from liberal Miami Beach can win in a state that hasn’t elected a Democratic governor since 1994, Levine sees that as nonsense.

“I knew this African-American guy, believe it or not, who won the state twice and was elected president of the United States twice, and an older Jewish guy almost got the Democratic nomination for president,” he says. (Barack Obama carried the state in the 2008 and 2012 elections. In the 2016 Florida Democratic primary, Hillary Clinton beat Bernie Sanders in a landslide.)

Stone, now 89 and living in Maryland, says being Jewish wasn’t an obstacle to running statewide — the main hurdle was being from Miami Beach.

“It can be done, as I’ve shown, but people are normally more comfortable with a nearby neighbor running for office than someone from a longer way away,” he said.

The saying in Florida is that the more north you go, the more south you go — which means voters in the conservative northern part of the Sunshine State may not relate to candidates from liberal South Florida.

Successful candidates must appeal to the factions of voters across the state, said Ashley Walker, who ran Obama’s 2012 campaign in Florida.

“A candidate’s ability to appeal to diverse voters across the state is more important than their racial or religious background,” she says.

About 3.3 percent of the population in Florida is Jewish. Since half the Jews in Florida are over 65 and Jews historically vote in higher numbers than other groups, the percent who vote is higher, around 5 to 7 percent, says University of Miami demographer Ira Sheskin, who studies the Jewish community. The majority of Jewish voters are Democrats.

Florida has had only one governor with Jewish roots, according to the Jewish Museum of Florida-FIU. David Sholtz, who served as governor in 1933-37, was born to Jewish parents but considered himself Congregationalist, according to an article in the Jewish Daily Bulletin in 1932. 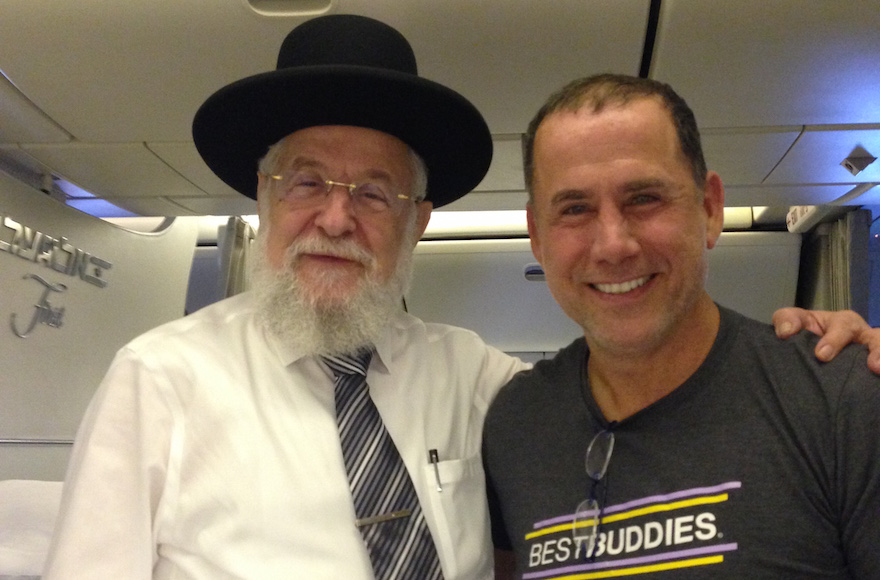 A few Jewish Democrats have run statewide in recent years but lost. In the 2014 Democratic primary for governor, former state Sen. Nan Rich of Broward County in the south lost to former Gov. Charlie Crist, a former Republican, who then lost to Republican Gov. Rick Scott in the general election. In 2010, two Jewish Democrats competed in the primary for attorney general: The winner, Dan Gelber, lost in the general election to Republican Pam Bondi.

Gelber, who is now the Miami Beach mayor, says Democratic voters look for a candidate who checks certain progressive boxes — such as favoring abortion rights — and won’t make a decision based on religion.

Levine “is a successful businessman. That will be more defining to him than his religion,” Gelber says.

Levine had his bar mitzvah at Temple Solel in Hollywood and is now a member of Temple Beth Sholom, a Reform synagogue in Miami Beach. He says religion won’t play a role in his campaign.

“I believe that the most important tenet of my philosophy is to do the right thing,” he says. “I attribute it to my inner core — my inner compass, not to religion.”

In 1990, with $500 capital, Levine launched a business from a studio apartment on Ocean Drive that provided magazines and TV programming on cruise ships. The company later grew to amass a revenue of about $400 million. He later sold the company and is now CEO of Royal Media Partners, which provides media to Royal Caribbean Cruises.

After spending $2 million of his own money and winning the Miami Beach mayor’s race in 2013, Levine grew a national profile by becoming an expert on how local government can respond to climate change — and calling out President Donald Trump to do more.

Shortly before Trump took office, Levine wrote an op-ed in Time calling on the president-elect to protect Florida’s coastline.

“As I have said many times, the ocean is not Republican or Democrat,” he wrote. “While we bicker over the science and solutions, it will only continue to rise.”

In June, Levine hosted the U.S. Mayors Conference and showed off the city’s efforts to curb flooding by investing $500 million on pumps and raising streets. Levine, who is friendly with the Clintons and was a Hillary Clinton surrogate during the campaign, brought former President Bill Clinton to speak at the event.

Levine has a gift for drawing attention to himself. He landed an interview on CNN after he chartered a flight with 7,000 pounds of supplies to help San Juan following a hurricane that slammed Puerto Rico and bashed Trump’s response to the island. Democrats are courting Puerto Rican voters because they are a growing population in Florida.

“Where is the federal government and the leadership at the top, like Dwight Eisenhower and FDR?” he said on CNN. “This was an invasion. This is a war. Our territory was attacked by a natural disaster. Treat it like a war. Help these people.”

Levine says he is a strong supporter of Israel — a relationship that began one summer when he visited there while studying at the London School of Economics.

“I landed in Tel Aviv. I had no place to stay. I had a telephone number of a distant cousin I never met,” he recalls. “I had to close the deal on one call. If I didn’t close the deal I would be sleeping on Tel Aviv Beach. I spent two weeks on their couch. That was the beginning of my first experience in Israel. I had the most remarkable two weeks.”

He has returned to Israel multiple times — most recently in November after helping convince El Al to start offering a direct flight from Miami to Tel Aviv after a nine-year hiatus.

“It began in my conference room and culminated in the inaugural flight Saturday night,” Nov. 4, he said. “I had the owner of El Al sitting to my right, and the chief rabbi of Israel sitting on my left.”

Rabbi Yisrael Meir Lau, a former Ashkenazi chief rabbi of Israel, took part in the inaugural festivities. David Maimon, who was president and CEO of the publicly traded El Al, announced his resignation earlier this month.

The Democratic primary field for Florida governor was already crowded with contenders when Levine officially announced his candidacy Nov. 1. He faces former U.S. Rep. Gwen Graham, who represented northern Florida for one term and is the daughter of Bob Graham, a former U.S. senator and governor of Florida; Tallahassee Mayor Andrew Gillum; and Orlando businessman Chris King. John Morgan, a wealthy trial lawyer who bankrolled the state’s medical marijuana amendment, may enter the race.

No candidate has emerged as a clear favorite, but Levine leads the pack in fundraising. He launched his All About Florida PAC in June 2016, more than a year before he officially became a candidate. He has raised about $5.7 million through October — slightly less than half from himself.

The Democrat who emerges from the August 2018 primary will face an uphill battle to beat the Republican. The GOP front-runner, state Agriculture Commissioner Adam Putnam, has raised more than $16 million since 2015 through his committee.

Although Democrats hold a slight edge in registration over Republicans in Florida, U.S. Sen. Bill Nelson is the lone Democratic statewide office holder. But Democrats see signs of hope in the swing state where Trump won by a percentage point and now has negative approval ratings.

Levine’s main liability is his temperament — he has lashed out at the media, blocked access to critics on social media and went on a Facebook rant against Airbnb earlier this year. He also pushed for a ban on liquor sales after 2 a.m. on Miami Beach, which voters overwhelmingly rejected.

Levine says voters are looking for a candidate who has a track record of getting things done.

(Amy Sherman is a freelance writer in Fort Lauderdale. She can be reached at amyshermanwriter.com or amysherman72@yahoo.com)