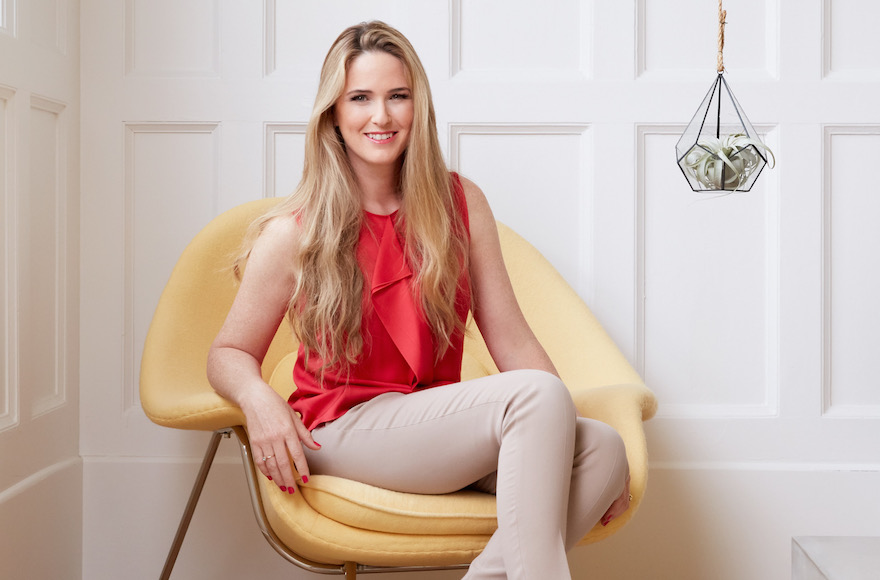 SUNNYVALE, Calif. (JTA) — Before she boarded the plane from Israel to Silicon Valley, Darya Henig Shaked already was bucking stereotypes of women in tech.

Among married Israeli techies in the Bay Area, it’s assumed that the man in the marriage was the one who obtained a work visa to come to the United States, bringing his wife in tow. In several interviews with a reporter, Israeli men in tech referred to the wives of their colleagues as “plus-ones,” not the reason the family moved from Tel Aviv to Palo Alto.

But Shaked was no plus-one.

In the early 2000s, she had served as an adviser to then-Prime Minister Ehud Barak before becoming involved in Israeli venture capital funding for tech enterprises in sub-Saharan Africa. In 2015, she and her husband, Eyal Shaked, also a tech investor, decided to move to Silicon Valley to immerse themselves in the tech scene. And when they made the move, it was on Shaked’s visa.

Shaked appreciated the local professional culture, where people were happy to provide each other with advice, access and connections. But she saw firsthand that lots of Israeli women had trouble accessing those connections, even as their male peers succeeded.

“What I understood is that there’s an opportunity, there’s a treasure trove of a helping community [in Silicon Valley] more even than in Tel Aviv,” Shaked told JTA at a cafe here, blocks from one of the biggest tech incubators in Silicon Valley. “I felt there was an opportunity that women founders weren’t aware of. I thought I could easily make it available for them.”

Months after arriving, Shaked founded WeAct, an organization that brings Israeli women who founded startups on missions to Silicon Valley to meet investors, officials at tech giants like Facebook and Google, and other entrepreneurs. So far, she has brought 50 women on three weeklong trips. Shaked also is opening a shared workspace for female entrepreneurs. 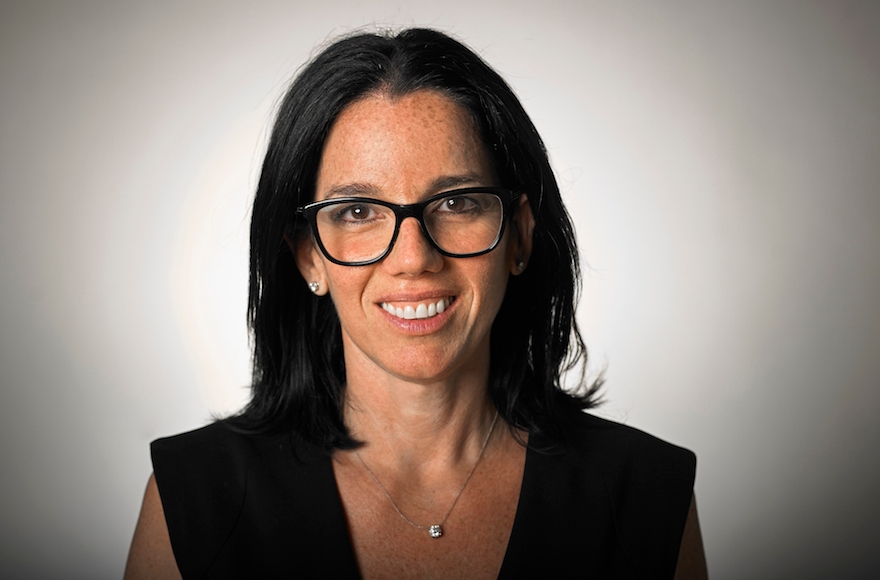 Yasmin Lukatz is the founder of ICON, a nonprofit that connects Israeli entrepreneurs to resources and investors in Silicon Valley. (Courtesy of Lukatz)

Shaked is one of several Israeli women — and men — working to advance other Israeli women in the notoriously male world of tech. Most of these initiatives, from venture capital investment to informal meet-ups, center on the idea that if women can obtain the tools and reach the players they need in the tech world, they will succeed more while inspiring other women entrepreneurs.

“Why is it that women choose not to be founders of companies and are not going into tech?” asked Shuly Galili, a founding partner of UpWest Labs, a venture capital firm that funds Israeli startups looking to expand to Silicon Valley. “Is it because there’s no room for it? Is it because there are less role models, where someone can say, ‘So-and-so did it. I can do it, too?’ There needs to be a lot more exposure.”

About a fifth of the startups funded by UpWest have female founders, compared to 9 percent of startups as a whole, according to a report by the Harvard Business Review. Those sparse statistics also play out at tech conventions, which can be overwhelmingly male.

Boaz Katz, a co-founder of Bizzabo, which facilitates tech for large events, posted indignantly on Facebook last week that a tech conference in Israel had nearly no women.

“There are 200 people here,” he wrote. “Guess what? There are only two women here. Two. Everyone else is men … The only thing going through my head is the word shame. We should be ashamed of ourselves that this is the situation in our industry.”

After seeing the post, a friend of Katz’s, tech entrepreneur Yonatan Zur, started a project called Let’s Get to 51%, which aims to make that the percentage of women founders in tech. The project allows women entrepreneurs to schedule meetings with experienced Israeli and American tech executives who have reserved slots in their schedule for that purpose.

By the morning after the Katz post, 17 people had offered meetings. Two days later the number was around 80.

“Everyone understands there’s a problem and is willing to help,” Zur said.

Israelis note that mandatory service in the Israel Defense Forces, which affords women tech training, may give them a leg up in the field. The elite intelligence unit 8200, a kind of prep school for Israel’s startup scene, has a large percentage of women.

Yasmin Lukatz, the founder of ICON, or Israel Collaboration Network, a nonprofit that connects Israeli entrepreneurs to resources and investors in Silicon Valley, said Israeli women aren’t fazed by men she called “douchebags.” 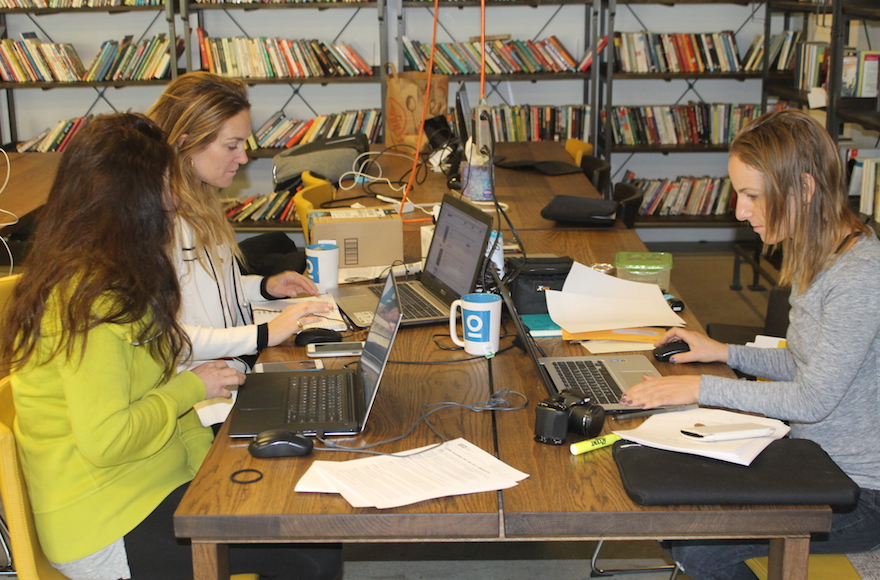 Women at work in the communal workspace of ICON. (Ben Sales)

“They are strong even when they’re being discriminated against by an investor who wants to meet them in a bar,” she said in an interview at the expansive and glitzy campus of the JCC in Palo Alto, itself a testament to the Jewish and Israeli money washing into Northern California. “They’re strong and will not be intimidated by it, and know their worth.”

ICON’s partners include the JCC, various tech and law companies, the Israeli-American Council and the Israeli government’s Economic Mission to the West Coast.

But female activists added that the onus shouldn’t be only on women to break into tech. Shaked said it’s hard even for women entrepreneurs to leave behind the traditional expectations of a wife and mother. The trips she offers are a week long, she said, in part because women have hinted to her that they won’t leave their children for more than a week.

Shaked knows the feeling — and wishes men would more equitably share the responsibilities of parenting.

“I know men want to play a key role in their families. I hope men will say, ‘I don’t want to go more than a week.’ I wish there weren’t these problems, to educate women to not be in the house for more than a week.”

Lukatz added that male employers should look harder for qualified women to hire.

“Women’s empowerment is not just for women, but the men need to see it, too,” she said. Men who complain that it’s hard to find women engineers to hire, she added, need to persist.

“Don’t give up just because it’s challenging,” Lukatz said. “Think about your daughter. Once men become fathers to girls, they work harder on creating a better world for their daughters.”