Their troubled brother wandered into Gaza. Now his Ethiopian-Israeli family wants US help to get him back. 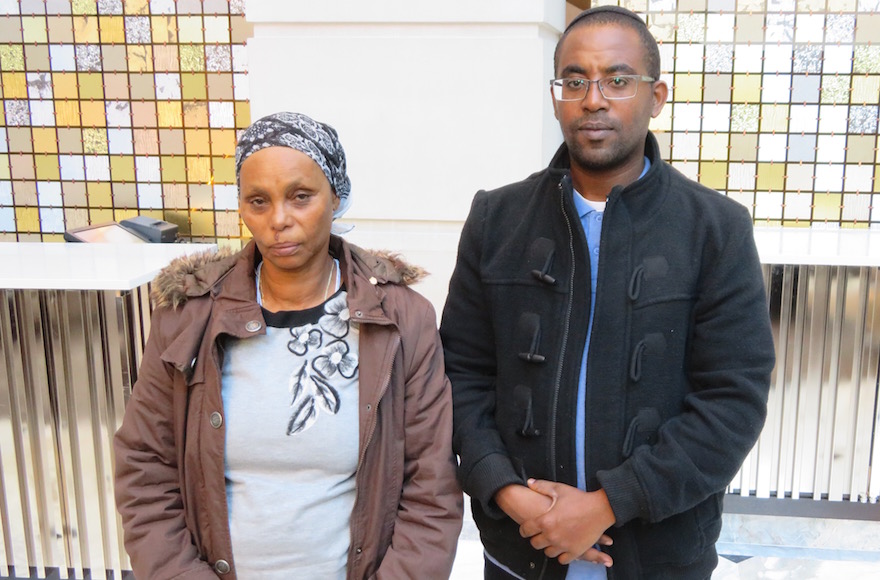 WASHINGTON (JTA) — Ilan Mengistu knows his pitch to rescue his brother, Avera, should be a no-brainer to Jews — “pidyon shvuyim,” the redemption of the hostage, is among the greatest of commandments.

But Mengistu also knows that the story he has to tell is not the straightforward narrative longed for by those who would do good: Avera was not a soldier, nor was he captured exactly. He crossed into the Gaza Strip of his own volition.

Mengistu came to Los Angeles and Washington, D.C., last week with his mother to raise awareness of the plight of his brother, who has been held captive, presumably by Hamas, since September 2014. Meeting with Jewish organizations and lawmakers, they are hoping for the kind of activist and diplomatic pressure that rescued the Mengistus from a repressive regime in Ethiopia and brought them to Israel on Operation Solomon in the early 1990s.

For that to happen, Mengistu knows he must start at the beginning of a difficult tale: The birth 31 years ago in Ethiopia of a brother so beloved his mother named him after an Amharic word for “light.”

“They say a name shapes an identity,” Mengistu said, meeting a JTA reporter last week in a hotel lobby here. Avera was ebullient and loving, his brother recalled. “He was the light in our house, we would feel him around the Shabbat table and on holidays.”

Light nourishes but also fades: Avera Mengistu, suffering from a mental disorder, managed to keep it under control as long as his older brother, Michael, was around. He, his five other brothers and three sisters idolized Michael, who Mengistu says served in Israel’s esteemed Golani unit and imposed army-like discipline at home.

In 2012, Michael, deep into an ascetic journey, starved himself; he was hospitalized and died. That’s when Avera began to fade.

He was institutionalized twice over the subsequent two years, but each time released within less than two weeks. And then, on Sept. 7, 2014, Avera left the family’s Ashkelon home and walked into the Gaza Strip.

He was imprisoned by Hamas, the terrorist organization controlling Gaza. Mengistu had indications from Avera’s Hamas captors that his brother was alive, but since then, nothing.

The family heeded Israeli government pleas to keep quiet for 10 months: The less publicity, Israeli authorities told them, the likelier his release.

After 10 months, despairing, the family asked to go public. They reached out to an array of human rights organizations and the International Red Cross. They received assurances, but not sustained exposure of Avera’s plight.

“Human Rights Watch put out a report,” Mengistu said, and smiled, unable to add much more. The Red Cross also has said it is dedicated to securing the release of Avera Mengistu and Juba Abu Ganima, another Israeli taken captive after entering Gaza. 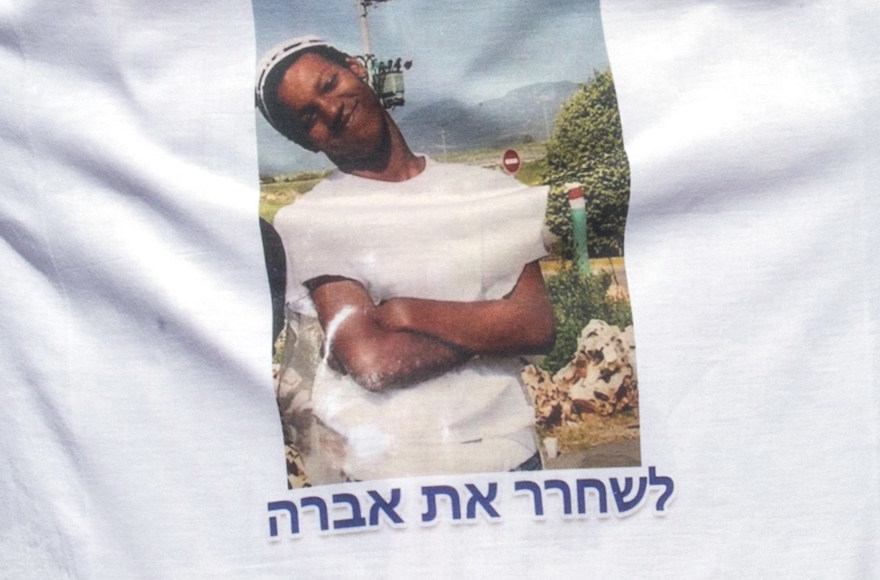 A photo of Avraham Mengistu on a shirt worn by a relative protesting in Israel, Aug. 17, 2015. (Jack Guez/AFP/Getty Images)

Mengistu skates close to expressions of disappointment throughout the interview: with the Red Cross; with the Israeli government; with his brother’s caregivers, who kept releasing him back to the family; with the soldiers who witnessed his brother’s crossing into the Gaza Strip (it’s on video) and did not stop him; even with Avera. But then he backs away.

“The day the Shabak [Israel’s internal security service] came to me, I thought, ‘Gaza, really? Avera, you could have gone anywhere,'” Mengistu said. “But when someone is undergoing a breakdown, their ability to think clearly is clouded. You can’t judge.”

What’s important, he said, is what happens next.

The Mengistus want what happens next to be along the lines of the dedicated campaign that brought about the family’s aliyah to Israel in 1991, with the Operation Solomon airlift.

It dawned on the family that a driving factor in the Ethiopian aliyah was the American Jewish community, which in the 1970s and ’80s argued to a sometimes reluctant Israeli government that the community was indeed Jewish and in need of rescue from the repressive regime in power at the time.

Yonit Fenta, a relative and an activist helping the family, translated the conversation into Amharic for Agamesh Mengistu, the mother of Ilan and Avera.

“Among American Jews, I can sense mercy,” said Agamesh Mengistu, who listened quietly through most of the interview, which was conducted in Hebrew.

The family hopes for the kind of sustained campaign that keeps the issue in the public eye as a means of getting through to governments that have influence on Hamas, such as Qatar and Turkey.

“We need the Jewish community and the American government if we’re going to release him,” Fenta said.

Ilan Mengistu said they have been heartened by their reception here on a visit arranged by the Israeli government and the Jewish Agency for Israel. It included meetings at the Jewish Federations of North America General Assembly last week in Los Angeles, and meetings in Washington and Los Angeles with congregational rabbis.

They have also spoken with StandWithUs and J Street about advocacy campaigns. The two groups are usually on opposite sides of the pro-Israel spectrum — an indication of the breadth of the cause’s appeal.

“Advocating for Mengistu’s return is an issue we hope will bring people and organizations from across a broad swath of the Jewish community together,” J Street spokeswoman Jessica Rosenblum told JTA.

Jason Greenblatt, President Donald Trump’s envoy to Middle East peace, met with the family and posted a photo on his Twitter page — an important signal from the Trump administration figure who is closest to the Palestinian Authority and has worked to ease economic strife in the Gaza Strip.

“Today I welcomed the family of Avera Mengistu to the White House,” Greenblatt wrote. “Avera has been held by Hamas in Gaza for over 1,000 days since he disappeared in September, 2014. It is outrageous that Hamas will not let him return home or communicate with his family.”

Today I welcomed the family of Avera Mengistu to the White House. Avera has been held by Hamas in Gaza for over 1,000 days since he disappeared in September, 2014. It is outrageous that Hamas will not let him return home or communicate with his family. pic.twitter.com/dvWE5UzZC6

They have also met with lawmakers, including Reps. Brad Sherman, D-Calif.,  Ted Deutch, D-Fla., and Ed Royce, R-Calif., the chairman of the U.S. House of Representatives Foreign Affairs Committee, as well as with staff from the office of Sen. Ted Cruz, R-Texas.

“It’s not easy repeating this story again and again,” Ilan Mengistu said. “It requires emotional strength. We get love, and it gives us strength.”