Judah Maccabee went to the doctor. Then the anti-vaxxers got very mad. 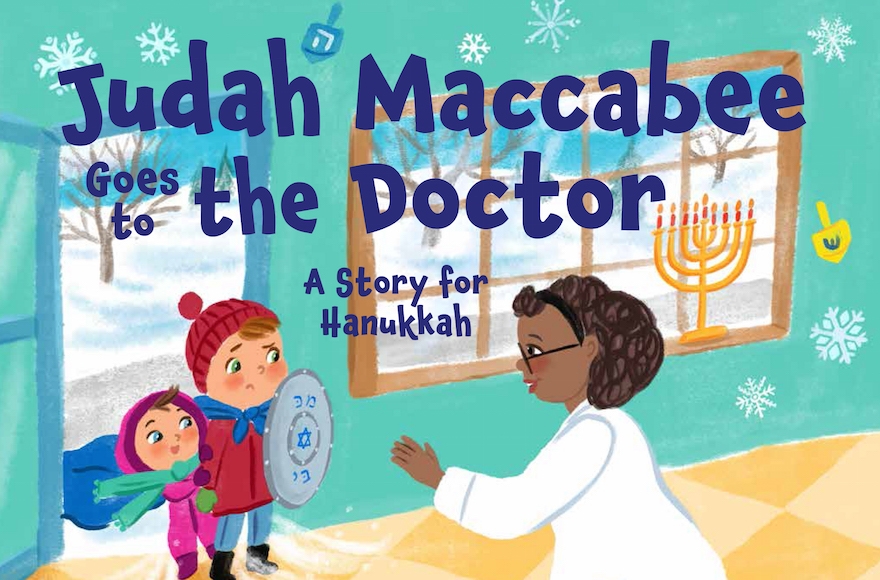 The cover for "Judah Maccabee Goes to the Doctor: A Story for Hanukkah" by Ann D. Koffsky. (Apples & Honey Press)
Advertisement

(JTA) — Like any self-respecting author, Ann D. Koffsky checks her Amazon rankings on a regular basis.

“A little bit ridiculously,” she acknowledged.

Yet when she noticed the rating for her most recent book had dropped to one-star overnight, it wasn’t so funny — especially once she started reading the user reviews.

“This book is filled with lies,” claimed one.

“Utter propaganda …” began the next.

Soon the “review war,” as Koffsky called it, spilled over onto her personal Facebook page.

“I think my favorite comment was the one questioning my mental state,” said Koffsky, who has written more than 30 books for children.

Yes, the target of all this rage is a children’s picture book, Koffsky’s latest, published just in time for Hanukkah.

“Judah Maccabee Goes to the Doctor: A Story for Hanukkah” is about a young boy named Judah who — spoiler alert! — goes to the doctor. With cheerful illustrations by Talitha Shipman, Koffsky’s story follows Judah as he learns to channel the bravery of his Maccabee namesake and get a scary booster shot, thus protecting his little sister, Hannah, who is too young to be vaccinated.

“We didn’t do this in order to run into a debate,” said Vicki Weber, a partner at Behrman House, the 96-year-old educational publisher that released the book under its Apples & Honey imprint. “We like to use Jewish life and Jewish views to tell stories that are different, and we thought this was a really interesting way to show courage in a small child.”

Yet the book has drawn ire from what is known as the anti-vaxxer movement — an impassioned, small but growing group that believes vaccinations pose dangerous risks, such as a long-discredited link to autism. In addition to the barrage of negative reviews on Amazon, anti-vaxxers have attacked Koffsky personally on her Instagram account.

“Your book is a brainwashing story by a mental author,” one commenter wrote. “You’ll be held responsible for all the damages these vaccines caused to innocent children as a result of your book.”

Weber feels for Koffsky, who also works as an editor and art director at Behrman House. But at the same time she’s ready to stand her ground.

“I’m not glad that somebody is saying these kinds of miserable things about a colleague and friend of mine — there’s no place for that,” Weber said. “But part of me wants to say ‘bring it on … as long as you spell the title of the book correctly.’”

Koffsky told JTA that she was not surprised by the negative response, though a bit startled by its ferocity.

“I’m sure there are people who have thoughtfully considered that vaccinations are not for their children for some reason, and I disagree with them and I don’t think the science supports them,” she said. “Those are not the people who posted reviews.”

What upsets her, she explained, and what prompted her to write the book in the first place, is how some parents use Judaism to justify their stance against immunization. The idea came to her early last year, when she became aware that some Jewish day school parents — Koffsky is one at a day school near her home in West Hempstead, New York — were opting out of vaccinations on religious grounds.

“It’s one thing to say you don’t want to vaccinate your kids because you have insane beliefs,” said Koffsky, a mother of three. “But to say ‘and I believe this way because of the Torah’ just drove me crazy. I was really angry because I felt it was such a distortion of Jewish values.”

For the record, the safety and effectiveness of childhood vaccines is supported by the Centers for Disease Control and Prevention, the American Academy of Pediatrics and the overwhelming majority of medical professionals based on dozens of studies involving millions of children.

And while some haredi Orthodox rabbis have made news for railing against vaccines, there is a large pro-vaccine consensus in the Jewish world as well. The Orthodox Union and Rabbinical Council of America have strongly called on all Jewish parents to vaccinate their children according to the timetable recommended by their pediatricians, as has the haredi Agudas Harabonim-Union of Orthodox Rabbis of the United States and Canada.

“Halachically, a person is obligated to follow the doctor’s opinion, especially in matters pertaining to vaccines and other forms of medicine which prevent illnesses and death,” wrote Rabbi Sholom Shuchat, a deciser for Chabad-Lubavitch rabbis worldwide, adding that in the Torah, “when someone does an action which can cause death, or even refuses to do an action which can prevent death, he is compared to a murderer.”

Dr. Akiva Turner, director of the doctoral program in health science at Nova Southeastern University and former communicable disease director for the Broward County Health Department — and an ordained Orthodox rabbi — researches religion and health. He points out that while people often separate science from religion, major rabbinical authorities have relied on medical science when making their rulings.

Therefore, he explained, those Jewish parents who claim a religious objection are not so different than secular anti-vaxxers.

“If they’re asking for an exemption [on religious grounds] — I don’t know any other way to put it — they are erring on the science that’s being used by these rabbinic authorities, who all say that you should get your child vaccinated,” Turner said.

Nevertheless, there is a noticeable decline in vaccination rates in some religious Jewish communities and a rise in exemptions at certain Jewish day schools. A measles outbreak in Los Angeles earlier this year centered on the Orthodox Jewish community, and a 2015 wave of pertussis, or whooping cough, appeared in the Brooklyn haredi Orthodox communities of Williamsburg and Borough Park.

“About 90 percent of the cases are among people who are unvaccinated,” Turner said of the outbreaks.

Neither Koffsky nor Weber said they expect the book to change the minds of hardened anti-vaxxers. Rather, Koffsky hopes to reassure parents who are vaccinating.

“It’s just a picture book,” she said, “but I want to make them feel good about their choice and communicate that to their kids.”

The kerfuffle has brought the book beyond readers in the Jewish community. After the first wave of negative online reviews, Koffsky said she rallied her friends to post reviews in order to get the ratings back up — and the effort spread far beyond her contacts.

“We are Catholic and not Jewish, but the book is still great for us,” one five-star reviewer wrote. “It lets [our son] see that others hold the same values as important.”

A handful of pro-vaccine and science-focused websites — usually not a popular forum for critiquing children’s Hanukkah books — have weighed in. A reviewer who blogs as The Vaccine Mom praised “Judah Maccabee Goes to the Doctor” as a needed addition to family dialogue and wrote that her young daughter “thought the Hanukkah story was very interesting. We learned something new!”

Koffsky added she is proud that the message of the book — its Amazon rating is back above four stars — has reached a wider audience than expected.

“It feels like kiddush Hashem [sanctifying God],” she said. “These are Jewish values, and these are universal values, and it feels good to be part of that conversation.”