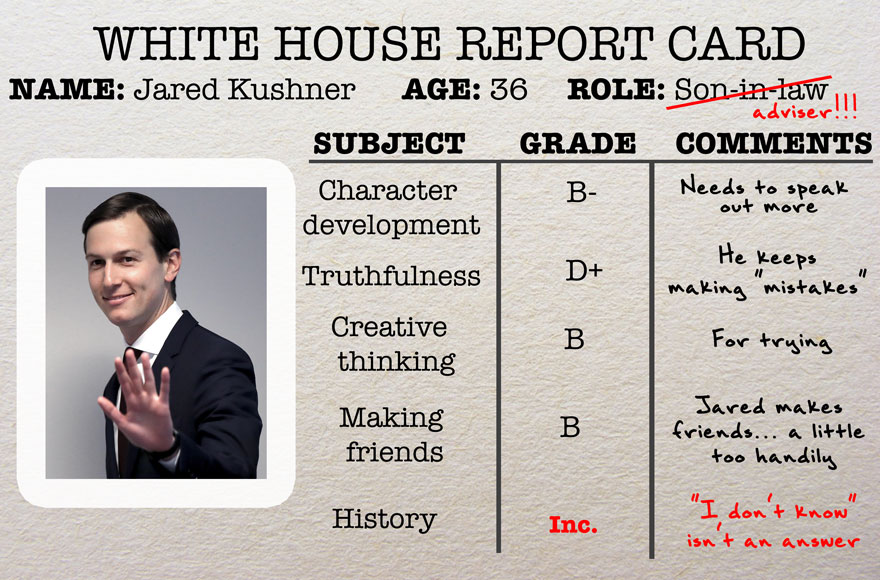 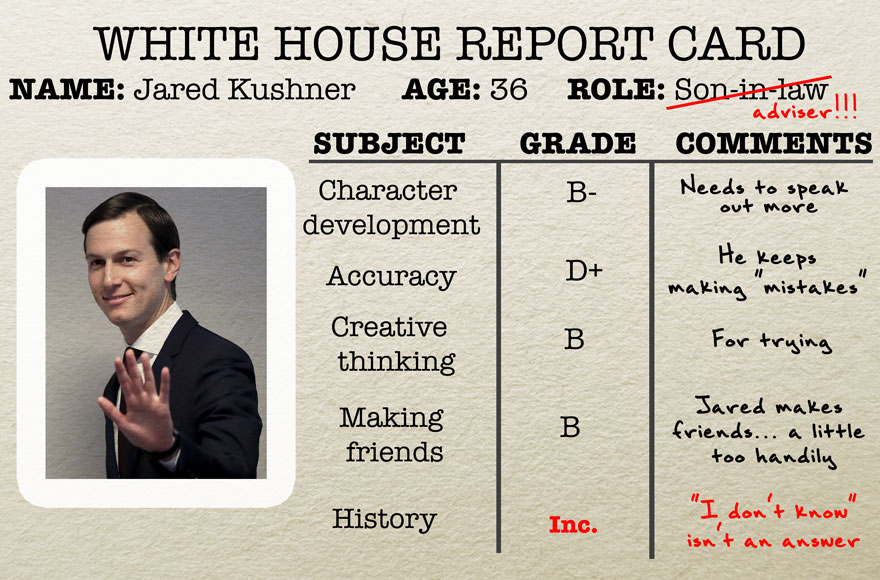 President Donald Trump, in the first fraught months of his administration, heralded the promise of his Jewish daughter, Ivanka, and her husband, Kushner, like a proud papa dropping the kids off at a tough new school.

“He’s a good boy,” he told The Wall Street Journal in July.

What Kushner has innovated, it’s not clear yet. His star has diminished. Over the weekend, The New York Times and the Washington Post each published deeply reported pieces with essentially the same headline: Jared was (ouch) “shrinking.”

Trump seemed to suggest as much in a statement to The Times ostensibly in support of his son-in-law.

“Jared is working very hard on peace between Israel and the Palestinians, and the last thing I would ever do is get in the way of that possibility,” he said. No mention of the opioid crisis, relations with China, the innovation office — all the items that were originally on Kushner’s to-do list.

Now reports suggest that Trump wants the kids out — partly because Kushner seems to be overwhelmed. The speculation even led Trump’s chief of staff, John Kelly, to tell The Times last week, on the record, “There was honestly never a time when I contemplated getting rid of Jared and Ivanka.”

“Getting rid of?” Eek. Time to check out that Montessori down the street — less demanding, but the ladies who run it seem so much kinder.

Jared started out with great confidence. “What the f*** do you care?” he reportedly told then-chief of staff Reince Priebus in January when Priebus asked what the office of innovation was innovating exactly.

“Everything runs through me,” he told business executives during the transition.

Jared shies from public speaking, however. He spoke publicly for the first time as a White House adviser in June, launching technology week, and his tone was flat and he barely cracked a smile. He’s barely uttered a peep since then.

He showed real character when Steve Bannon, Trump’s other senior adviser, started bullying him, calling him a “cuck” — a bad word meaning faux conservative — and a “globalist,” which in some corners of the “alt-right” can be a not very nice code for Jews. Proof of moxie? Bannon was gone by August and Kushner’s still around. For now.

Grade: B-minus. Jared can hold his own. He needs to speak out more.

That conversation with The Wall Street Journal in June, when Trump called his son-in-law a “good boy”? The president was thanking the paper’s editor for running an editorial praising Kushner for his cooperation with congressional committees investigating Trump campaign ties with Russia. The 11 pages he submitted were, the Journal said, a “template” for “radical transparency.”

Within weeks, The New York Times was reporting that Kushner had updated his federal disclosure form listing foreign contacts during the campaign three times, adding over a hundred names. “Mistakes,”  Jared’s team said.

Meanwhile, at around the same time, the Washington Post reported that Kushner had revised his financial disclosure form, adding “dozens” of financial holdings.

Grade: D-plus. Perhaps Jared is trying hard to be honest. But he keeps making “mistakes.”

About that office of innovation: Politico reported that it is assisting the Department of Veterans Affairs in restructuring its notoriously logy data system to align with the Pentagon’s much smoother system. That’s great news for veterans who have been lost in navigating the department’s medical care.

Kelly, pressed by The Times to name another win for the office, noted that it had sent some folks to Puerto Rico to help assess damage in the wake of Hurricane Maria.

It’s not entirely Kushner’s fault. He was using panels of corporate leaders assembled by his father-in-law as sounding boards to test his ideas, but those panels disbanded after said father-in-law failed to robustly condemn white supremacists who marched in Charlottesville, Virginia, on Aug. 12.

Grade: B. For effort.

Greenblatt has earned tremendous goodwill on all sides — but it’s not clear who exactly is in charge. The State Department announced earlier this month that it was ready to shut down the Palestine Liberation Organization office here — a move that likely would have scuttled any effort to restart the talks. It backtracked over the weekend.

Trump administration officials say we’ll know more about what’s planned come 2018. Kushner has been to Israel and the Palestinian areas three times since assuming his job, and scored a precedent-setting coup when he included stops there on Trump’s first overseas tour as president.

On the other hand, Kushner seemed less than enthusiastic when he spoke in August with congressional interns about the prospects for Middle East peace.

“So what do we offer that’s unique? I don’t know,” Kushner said in his seven-minute answer to an intern’s question in a recording obtained by Wired magazine. “And we’re trying to work with the parties very quietly to see if there’s a solution. And there may be no solution, but it’s one of the problem sets that the president asked us to focus on.”

Kushner is close to Mohammed bin Sultan, the Saudi Arabian crown prince. So close, the Washington Post reported earlier this month, that they chatted until 4 a.m. for several nights when Kushner visited the region recently, ostensibly to advance Israeli-Palestinian peace, trading ideas on strategy. Middle Eastern leaders see him as a prince in his own right, influential with his father-in-law.

Shortly thereafter, Mohammed threw Lebanon into turmoil by orchestrating the resignation of its prime minister. (Saad Hariri later reconsidered.) There were noises about a destabilizing Iran-Saudi war using Lebanon as a proxy battleground.

Did Kushner know about Mohammed’s plans? In the Middle East, whether he knew is less important than the perception that he knew. And that perception has stuck.