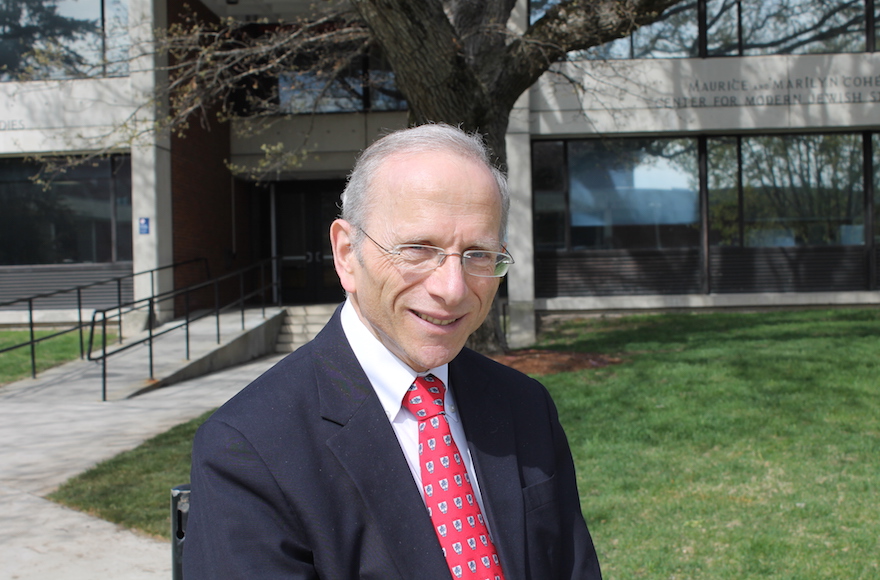 WALTHAM, Mass. (JTA) – Brandeis will recognize Jonathan Sarna, an eminent scholar of American Jewish history, as university professor — the highest honor for a faculty member and an award given to only a handful of others.

To mark the occasion Sarna, the Joseph H. and Belle R. Braun professor of American Jewish history and an award-winning author of more than 30 books, will deliver a lecture on Tuesday titled “Jews and American Politics: Historical Ideals and Contemporary Realities.”

Hundreds of faculty, students, alumni, university officials, and family and friends are expected to fill the historic Spingold Theater on the Boston-area campus to hear Sarna, who began teaching at Brandeis in 1990. His talk will reveal a newly discovered 1864 document, according to an announcement by the university.

The title of university professor, which is awarded to faculty whose renown cuts across traditional disciplines and who have achieved exceptional scholarly distinction, was conferred by the school’s trustees last spring, when Sarna was away from campus doing research in Israel.

In addition to his role as professor, Sarna chairs the college’s Hornstein Jewish Professional Leadership program and serves as chief historian of the National Museum of American Jewish History in Philadelphia, among many other affiliations. He is on the board of JTA’s parent company, 70 Faces Media.

“Jonathan is one of those rare individuals who excels on a professional scholarly basis and in his service to the university,” said Brandeis President Ron Liebowitz.

Liebowitz described Sarna to JTA as a selfless contributor to the college, from serving on numerous committees; as chair of the Near Eastern Studies department, a position he held three times; and as a generous and dedicated mentor to his undergraduate students and doctoral students.

“He has done it all,” Liebowitz said.

In an email, Sarna wrote that “I am honored and humbled by my new title.” Noting that only a few professors in Brandeis history have been named university professor, he added, “While I do not consider myself their equal, I am proud to stand in their company.”

Sarna, 62, a Philadelphia native who grew up in New York City and the Boston area, holds a bachelor’s and master’s degree from Brandeis, a Jewish-sponsored, nonsectarian research university. He earned his doctorate in 1979 from Yale and has taught at the Hebrew Union College-Jewish Institute of Religion in Cincinnati, as well as at Harvard, Yale, the University of Cincinnati and The Hebrew University in Jerusalem.

Among Sarna’s most highly acclaimed and widely known books is “American Judaism,” which won the 2004 Jewish Book Council’s Book of the Year; “When General Grant Expelled the Jews,” written in 2012; and “Lincoln and the Jews: A History,” co-authored with Benjamin Shapell in 2015.

Sarna has persevered in his career and scholarship, overcoming two health setbacks.

Widely respected as a scholar, Sarna is also well known beyond academic circles as an engaging and witty speaker who has often crisscrossed the country to give talks in synagogues, Jewish community centers and museums. He is frequently quoted as an expert in worldwide media, and has appeared in documentary films and in the public television series “The Jewish Americans.”

Sarna’s wife, Ruth Langer, is a professor of theology and Jewish studies at Boston College, where she is associate director of the Center for Christian-Jewish Learning, and a Reform rabbi. They have two grown children, Aaron and Leah.