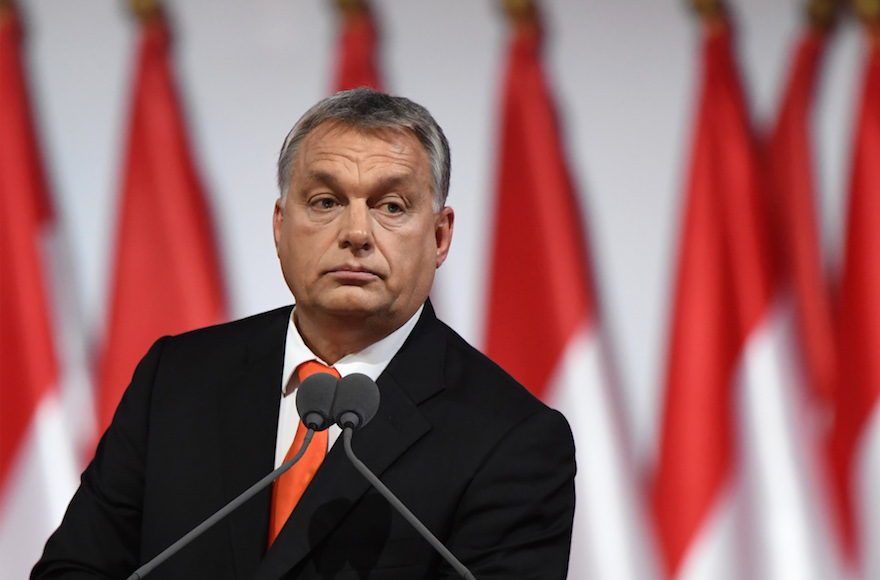 BUDAPEST (JTA) — At a conference about anti-Semitism in Europe, senior Hungarian officials said the absence of violence against Jews in their country owed to its refusal to admit Muslim immigrants.

The assertion, which at least one Jewish expert on anti-Semitism disputed, came amid criticism of Prime Minister Viktor Orban’s right-wing government by other European leaders of his immigration policy, and a dispute between the Hungarian leader and some Jewish community leaders who accuse Orban of encouraging or tolerating anti-Semitic rhetoric.

Whereas other European countries have seen jihadist terrorist attacks against Jews and others in recent years, “Hungary has been consistently able to protect its citizens and residents, its borders and its fundamental elements of statehood from mass immigration and international terrorism,” Minister of State for Security Policy István Mikola said Wednesday at an event in Budapest titled “Are Europe’s Jews Safe?” and organized by the Hungarian Jewry’s watchdog on anti-Semitism, the Action and Protection Foundation.

Csaba Latorkai, deputy state secretary for priority social affairs, noted the 2015 killing of a Jewish security guard in Denmark by an Islamist along with other attacks, including the murder of 137 people in Paris by other Islamists later that year.

“Taking security and administrative measures to prevent such acts, the Hungarian government acted, and so in the autumn of 2015 it decided to set up a border fence, introduced a legal closing of borders,” Latorkai said in his speech, adding it was “in order to protect citizens and make Hungary one of the most secure places in world. No one should be afraid that there may be attacks on our streets.”

The arrival of at least 2 million immigrants in Europe since 2015 from Iraq, Syria and other parts of the Middle East has pitted Western European governments that resolved to absorb the newcomers against eastern EU member states that shut down their borders, including Hungary.

Rabbi Andrew Baker, director of international Jewish affairs at the American Jewish Committee, told JTA at the event that the link made by Mikola owed to how Hungary, which will have a general election next year, “wants to say that this [its immigration policy] is yet another aspect of taking care of its Jewish community, even if it’s probably a bit of a stretch to see it as a threat to the Jewish community.”

Jewish community leaders across Europe are divided on the arrival of Middle East immigrants, with some citing Jewish values in urging generosity toward the newcomers and others warning that the influx of Muslims from countries where anti-Semitism is a social norm will exacerbate Europe’s anti-Semitism problem.

“The large number of refugees who entered Europe have obviously raised special concerns,” Baker said, but he urged listeners of his address to “resist the temptation of pointing the finger” at that population in identifying the causes of anti-Semitism.

Focusing on Muslim immigration “is an easy thing for people here in Hungary and the Hungarian government,” he told JTA, unlike other issues connected to anti-Semitism — including the government-led campaign this year against George Soros, the liberal Jewish-American billionaire, that some observers consider anti-Semitic.

The Mazsihisz umbrella of Jewish communities in Hungary has accused Orban since 2013 of whitewashing Hungary’s role in the murder of Jews in the Holocaust and mounting the campaign against Soros, a Holocaust survivor who was born in Hungary.

“The sad thing is, it works,” Baker said. “Under the current government, there are efforts at kind of rewriting” Hungary’s “clear narrative on the Holocaust.”

He noted the “famous or infamous” memorial statue in Budapest for the Nazi occupation, which the Jewish community in 2014 said whitewashes Hungary’s complicity in the Holocaust, and “speaking in positive ways about Miklos Horthy, Hungary’s wartime quisling.

Orban earlier this year called Horthy, who helped the Nazis kill many thousands of Jews, an “exceptional statesman.”

The chairman of the Action and Protection Foundation, Daniel Bodnar, said at the conference that while ant-Semitic violence remains extremely rare in Hungary, the country has seen anti-Semitic rhetoric proliferating over the past decade, notably through the far-right Jobbik party and its affiliated media.

In 2016 and 2015, his foundation recorded 23 and 53 incidents in Hungary, which has approximately 100,000 Jews, with no physical assaults of individuals. It has initiated dozens of criminal cases since its establishment in 2012.

Hundreds of incidents, with many assaults, were recorded in those years in Britain and France.