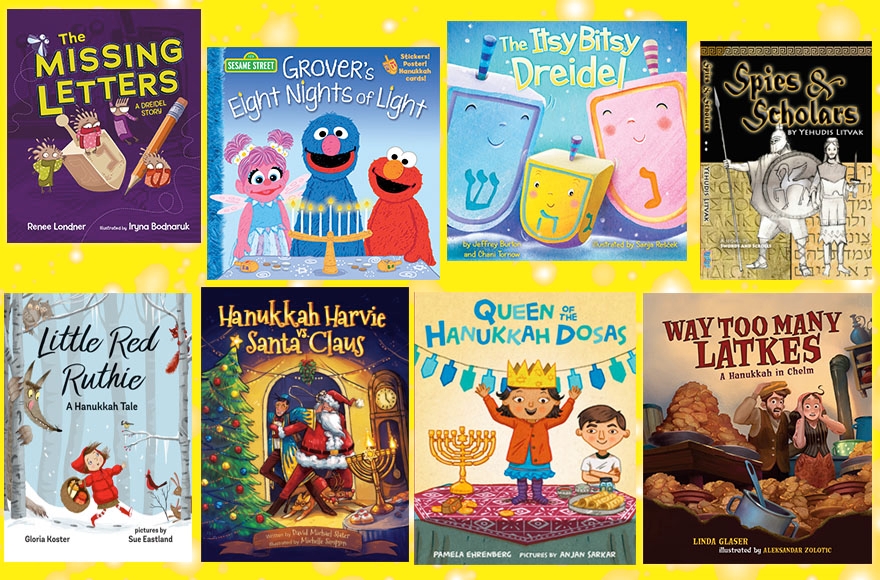 BOSTON (JTA) — Move over, potato latkes. Make room for dosas. The savory fried Indian lentil and rice pancakes take center stage in “Queen of the Dosas,” a gem of a new Hanukkah book by the award-winning children’s writer Pamela Ehrenberg.

It’s among eight new Hanukkah books for kids — one for each night of the holiday — sure to kindle the flames of imagination in young readers.

The bounty of this season’s books travel the globe, from city life to wooded forests, with engaging – and many humorous – stories and dazzling illustrations that reflect the diversity in how Jewish families celebrate the popular holiday. Old World traditions mix it up with new rituals taking root in today’s modern American Jewish families.

These new reads showcase the many ways Jewish families from all walks of life celebrate the Festival of Lights, which this year begins on the evening of Dec. 12..

Way Too Many Latkes: A Hanukkah in Chelm
Linda Glaser; illustrated by Aleksandar Zolotic
Kar-Ben; ages 3-8 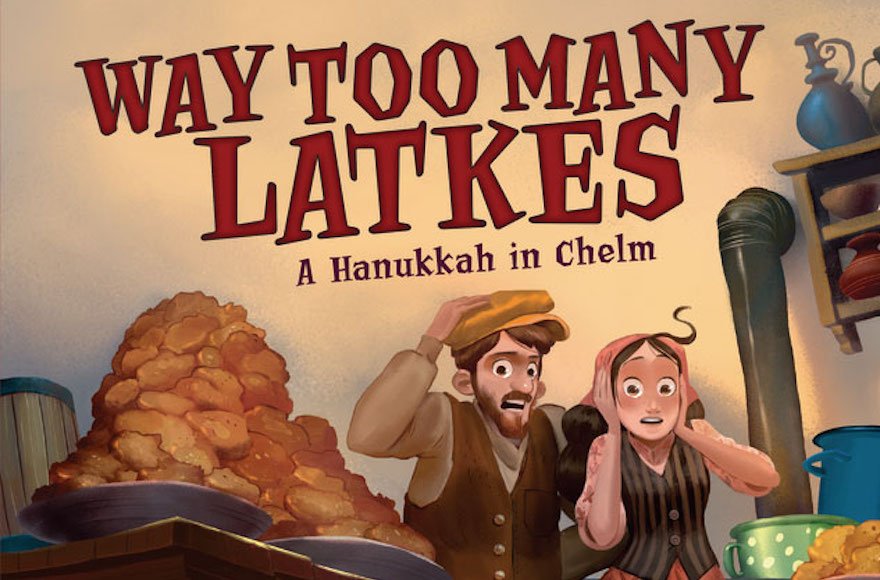 “Way Too Many Latkes: A Hanukkah in Chelm” (Courtesy of Kar-Ben)

Oy vey! It’s the first night of Hanukkah and Faigel, the best latke maker in the village of Chelm, forgot the recipe for her mouth-watering, sizzling potato pancakes, the traditional fried food eaten during the holiday’s celebrations. Her husband, Shmuel, races over to the village rabbi for advice. But what does the rabbi know about making latkes?

This ticklishly fun adventure, set in the fictional Old World town of Chelm — the source of enduring Jewish storytelling — will have kids laughing as they wonder how Faigel and Shmuel solve their problem. Aleksandar Zolotic’s large format, animation-style illustrations are perfectly paired for the lively story, which echoes the classic “Strega Nona” stories by Tomie dePaola about magical pots of pasta. 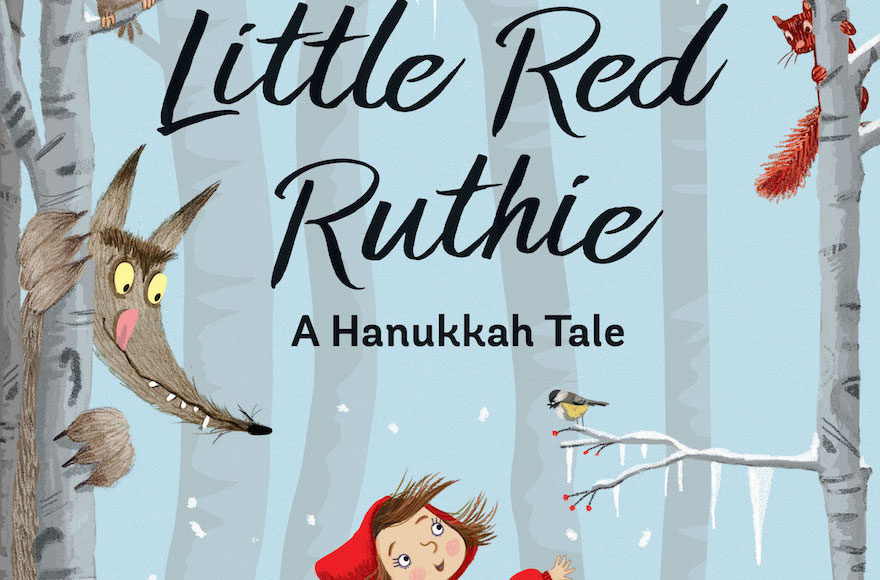 This uplifting spin on “Little Red Riding Hood” features a spirited young girl named Ruthie setting off on the eve of Hanukkah to visit her bubbe, Yiddish for grandmother, so they can cook up potato latkes for the holiday. In the snow-packed forest Ruthie, bundled up in a bright red hooded parka, meets a not overly menacing-looking wolf. Ruthie summons her courage and smarts as she recalls the brave Maccabee heroes of Hanukkah who fought for religious freedom for the Jews in ancient Israel.

But will Ruthie’s clever schemes outsmart the hungry but foolish wolf, who has fun dressing up in bubbe’s colorful clothing? This is a perfect read-aloud for those wintry Hanukkah nights, and Sue Eastland’s bright and humorous illustrations bring the warmhearted story to life. 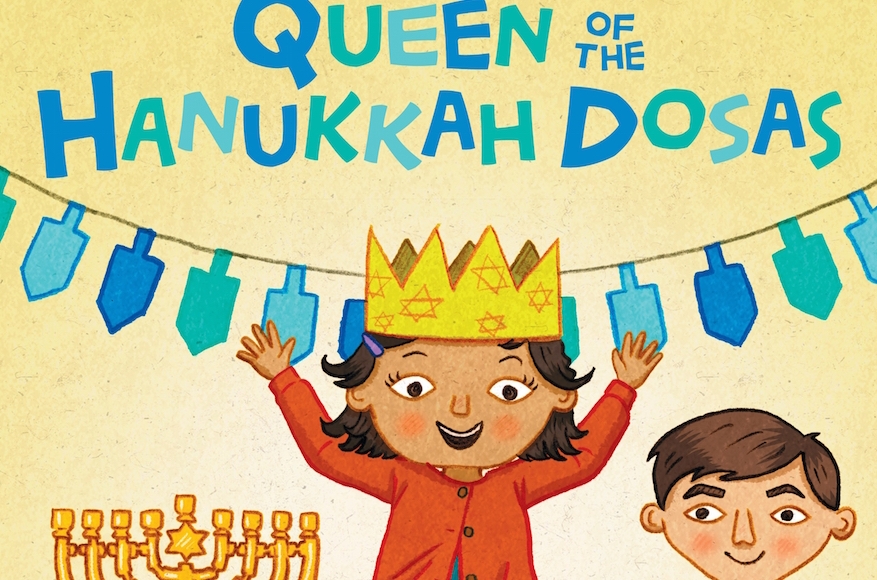 “Queen of the Hanukkah Dosas” (Courtesy of Farrar Straus & Giroux)

In this humor-filled tale, an endearing school-age boy in a multicultural Indian-Jewish family can hardly contain his enthusiasm for his family’s special Hanukkah celebration of making dosas, Indian fried pancakes made with lentils, called dal, and rice. But his younger sister, Sadie, who can’t resist her urge to climb on everything, may spoil the fun.

Anjar Sarkar’s colorful, cartoon-like illustrations add giggles and put readers in on the action. The end pages are embellished with illustrations of Indian groceries, chutneys and spices that will tempt the family foodies. Recipes for Dosas and Sambar, a vegetable-based filling or dip for the dosas, are included. 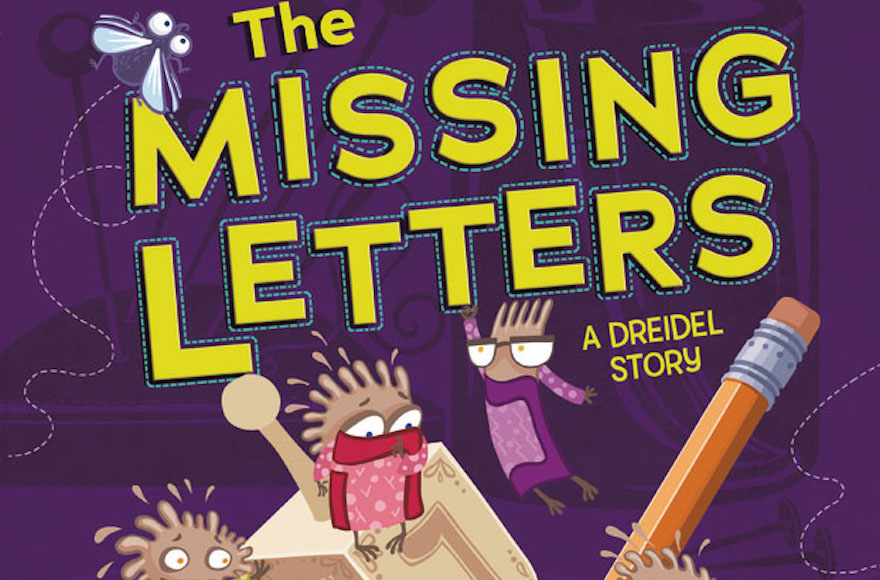 “The Missing Letters: A Dreidel Story” (Courtesy of Kar-Ben)

Wooden dreidels come to life in this heartwarming page turner. On the eve of Hanukkah, in a dreidel maker’s shop, there are some bad feelings among the Hebrew letters painted on the four-sided spinning toy. The nun, hey and shin are jealous of the gimel, considered the favorite letter in the game of chance, and decide to hide all of them. But later they overhear the dreidel maker explain that all the letters play a special role in celebrating Hanukkah, a holiday of religious freedom.

Among Iryna Bodnaruk’s animated illustrations is a double-page spread that is like a puzzle; kids can follow clues to find where the gimels have been hidden. 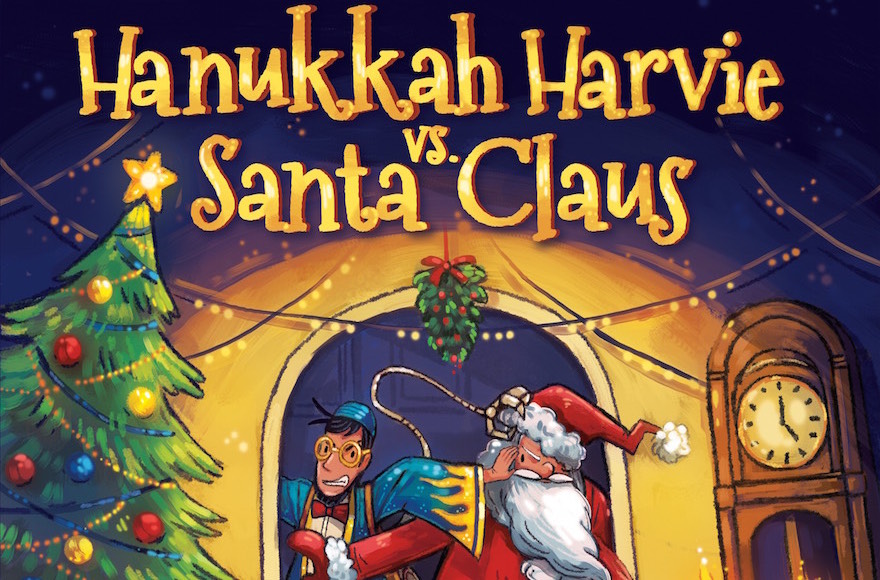 On the first night of Hanukkah, Hanukkah Harvie oils up his steampunk-like machinery to produce all the gifts he needs and climbs aboard his flying Hanukkopter to deliver eight nights of presents to children. Placing one family’s presents next to their Hanukkah menorah, Harvie bumps into a red-suited jolly Santa Claus piling gifts under their Christmas tree. Harvey and Santa go on to discover some other homes with both menorahs and Christmas trees and get into a rollicking present-giving competition, out to prove that their holiday is the best.

A young girl who spies them in action puts the quarreling pair to shame, and let’s them in on the joy of celebrating the two holidays happening at about the same time each year — thus the Chrismukkah mashup. Michelle Simpson’s colorful and playful animation-like illustrations match the story’s spirited humor. 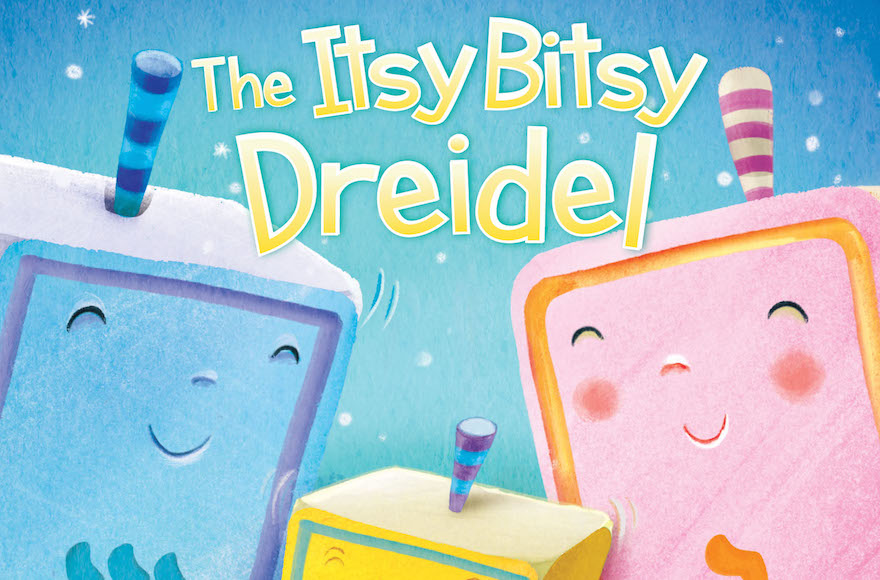 “The Itsy Bitsy Dreidel” (Courtesy of Simon and Schuster)

A delightful read-aloud board book for the youngest kids who will enjoy the playful rhymes as the lively little dreidel celebrates Hanukkah. This is the latest in the upbeat Itsy Bitsy board book series that includes the “Itsy Bitsy Pilgrim,” the “Itsy Bitsy Snowman,” and others. 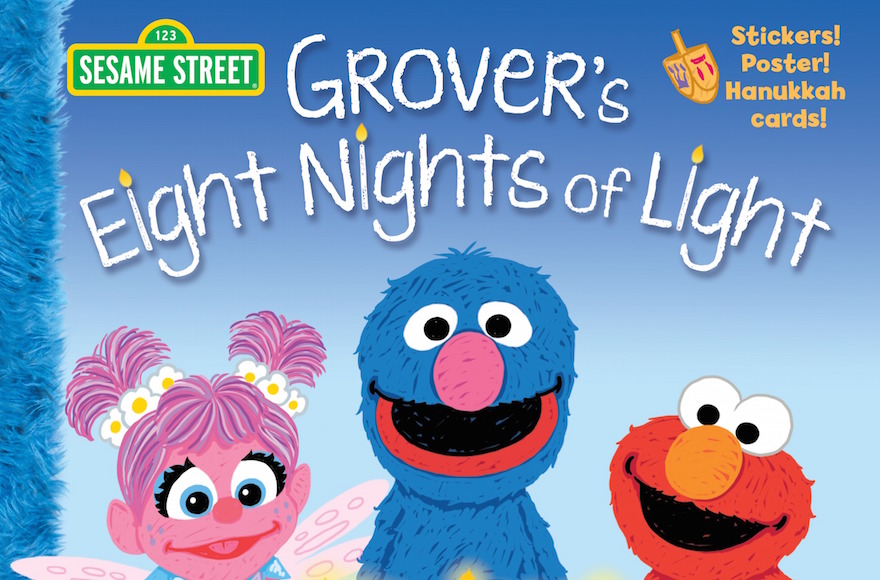 And a book for teens: 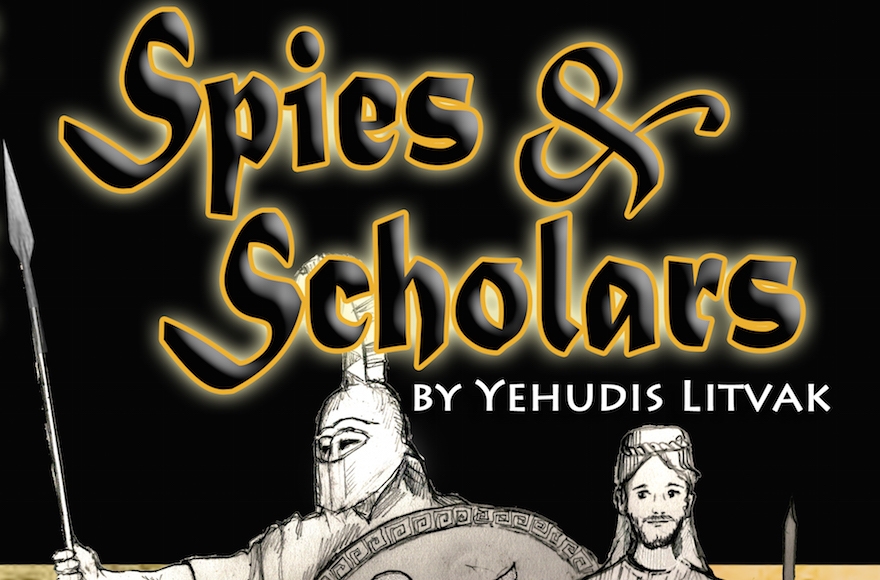 “Spies and Scholars” is the latest entry in the Hanukkah-themed series – the first was “Swords and Scrolls.” The historical fiction adventure is set during the reign of the Greek King Antiochus in ancient Israel where the Maccabees are fighting the Greeks. The 200-page teen read is geared to Orthodox Jewish teen readers and published by Jewish Children’s Book Club in conjunction with Torah Umesorah-National Society for Hebrew Day Schools.