Why so many African-American pro basketball players love Israel 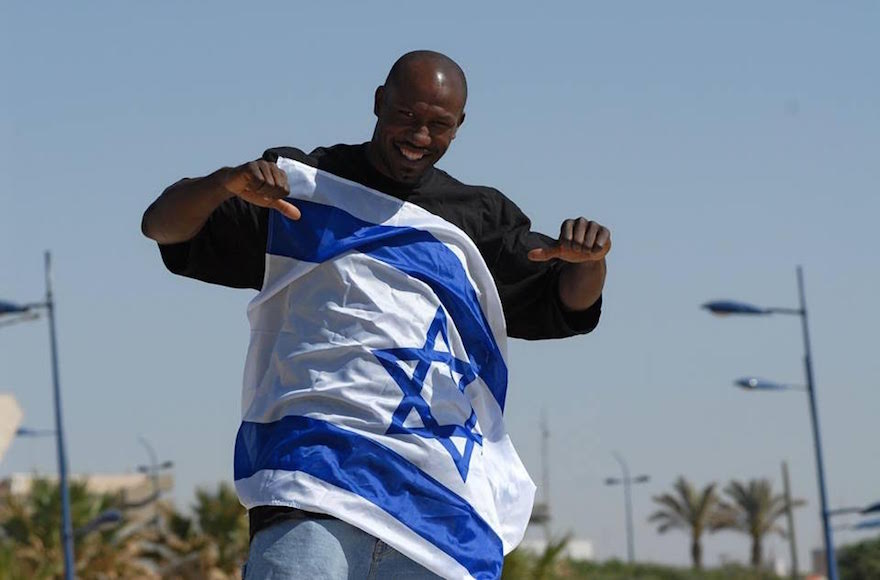 Cory Carr posted this picture to his Facebook profile in August 2013 with the following caption: “I figure, since the US and Israel have had such a great International relationship over the years that will never change, and this country has blessed me for sooo many years professionally, it's only right to represent." (Courtesy of Carr)
Advertisement

NEW YORK (JTA) — Chris Watson played four standout years of basketball at Niagara University, where he became one of the upstate New York school’s all-time leading scorers. So when the 6-7 forward-center went undrafted by an NBA team in 1997, he set out to play on a professional level internationally.

He played two years in Uruguay, then his agent called and said, “You’re going to Israel.”

Watson, an African-American from suburban White Plains — who in his own words did not grow up “watching the news” — said at the time he knew “nothing at all” about the Jewish state.

That quickly changed, and Watson stayed in Israel for more than 15 years, playing for several teams. He also married an Israeli woman, became an Israeli citizen and converted to Judaism.

As David A. Goldstein details in his recent book “Alley-Oop to Aliyah: African-American Hoopsters in the Holy Land,” Watson is far from the only black basketball player to do these things.

Since the 1976 arrival of Aulcie Perry — a 6-10 native of Newark, New Jersey, who led Maccabi Tel Aviv to two unexpected EuroLeague championships — more than 800 African-American players have competed in the Israeli Premier League, which formed in 1954 and is composed of the country’s 12 best teams.

After researching the history of the league and interviewing dozens of former and current players over the span of 10 years, Goldstein found that most of them professed a deep, genuine love for Israel, despite having grown up without a connection to the country.

“Forty-something converted in the ’70s and ’80s … tens of players got citizenship,” Goldstein told JTA. “Hundreds are now kind of advocates or ambassadors [for Israel] in the U.S. or internationally.” 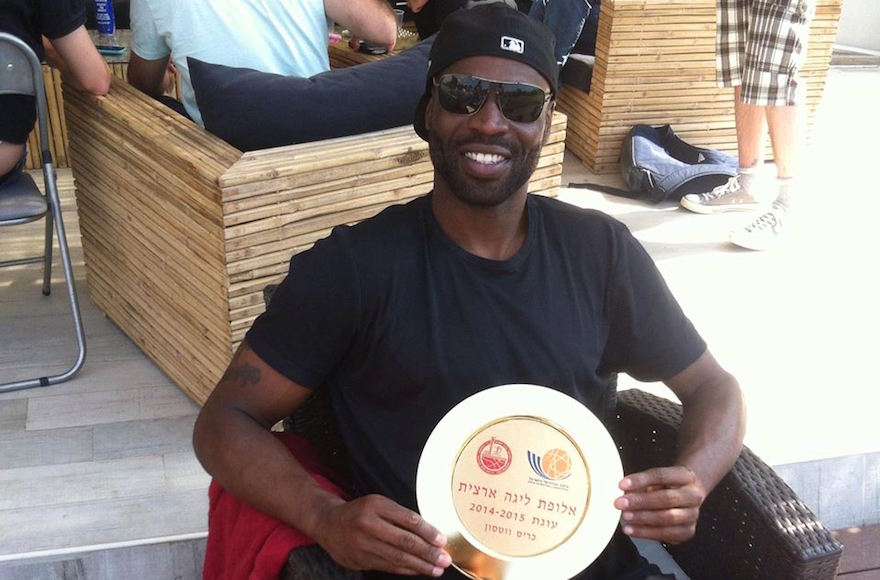 Chris Watson shows off a memento from Hapoel Beersheba’s 2014-15 championship in Israel’s third division at the home of the team owner. (Courtesy of Watson)

In the book, Goldstein explores how the black players adapted to Israel, why they formed an attachment to the Jewish state and how they impacted Israeli sport and society.

Prior to 1976, the use of foreign players was discouraged by a league rule dictating that only one non-Israeli could play at a time for an Israeli team, and only in games held on European soil. But Perry’s success ushered in the first of many rule changes: The lone foreign player could now play in games held in Israel, too. Over the decades, the league continued to adjust the rules, allowing teams to stack foreign players on their rosters.

As Goldstein completed his decade of research, the so-called “Russian rule” — named for the country where it originated — was the operating standard: Teams could sign as many foreign players as they wanted, but two Israeli citizens must be on the court at all times.

The teams tried to exploit the rule in the ’70s and ’80s, rushing foreign players through hasty conversions to Judaism in order to quickly turn them into citizens. But along the way, as Goldstein was surprised to discover, an unexpected number went through legitimate and meaningful Orthodox conversions. Perry, for instance — who was criticized by some for starting the fad — has remained Jewish. (He has also talked about how his mother does not fully accept his Jewishness). 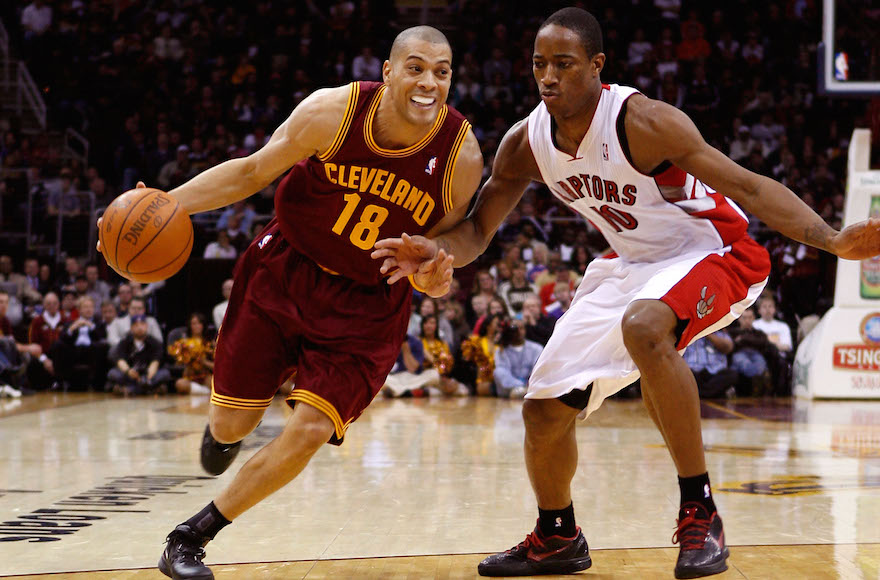 Anthony Parker upon returning to the NBA from Israel wore the number 18, which means life in Hebrew, to show his love for the country. (Mike Lawrie/Getty Images)

Watson, 42, mainly converted to marry his wife and has not been very observant since they divorced. But, he said, he enjoyed learning about Jewish texts and history throughout his conversion process.

“I didn’t get paid or try to pay anybody for my citizenship,” he said. “I didn’t take any shortcuts.”

Despite the controversy fueled by the league’s rules, basketball teams in other countries have similar quotas for foreigners in order to help foster local talent. Watson, for one, understands the way the Israeli league works.

“The Jewish people have fought so much to get their country,” he said. “They want to see each other succeed, which is natural.”

As Goldstein writes, notwithstanding any of the public hoopla surrounding the quickie conversions, African-American players over the years have had little trouble adapting rapidly to life in Israel. Like many, players with a passing knowledge about Israel have typically expected it to be a war zone where the people wear religious garb.

But once they arrive, the players are surprised by how many Israelis speak English and how welcoming and passionate they are. (Basketball is still second to soccer in terms of general popularity, but its reputation as a competitive league has grown exponentially in recent decades due in large part to the foreign players recruited by a number of teams other than powerhouse Maccabi Tel Aviv.) 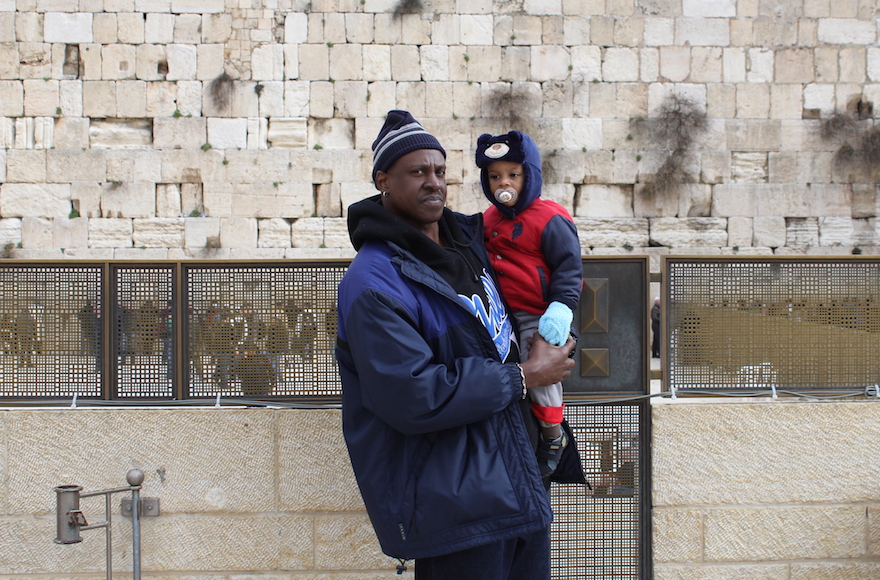 Stanley Brundy, who played for Maccabi Haifa and other Israeli teams, with his eldest son, Nadav, at the Western Wall in Jerusalem. (Courtesy of the Brundy family)

“The No. 1 thing that draws guys there is how easy it is to transition from America,” Watson said. “Guys that have been there for months, they’re like, ‘Wow, I love this place!’ And there’s a lot of guys that think about citizenship after that.”

When it comes to racism, Goldstein said he learned from his interviews that many players have actually felt less overt racism in Israel than they did in the U.S. For example, Willie Sims, who played in Israel for nearly 20 years, was once nearly arrested when he locked his keys in his car and tried to get back into it. Israeli police officers knocked him to the ground and handcuffed him.

“I asked, ‘Did any of that make you want to come back to the U.S.?’ And he said, ‘Are you kidding? All they did was handcuff me. In the U.S., I could’ve gotten shot,’” Goldstein said.

Yet while the players seem to be accepted on a societal level, prejudices remain. No African-American has ever been a head coach in Israel’s first division, and very few have had prominent coaching jobs in the second and third divisions. In a speech to Israeli military members in 2001, then-Maccabi Tel Aviv coach Pini Gershon was fired for saying that lighter-skinned black players were smarter than darker-skinned ones, who he called “dummies” and “slaves.”

“That makes you wonder what guys are really thinking on the inside,” Watson said. “I’ve heard guys say when you’re putting the ball in the hole, it’s all good, it’s all love. But the moment you can’t do that no more, it’s like, ‘Thank you, go home.’”

The Israeli league is far from the only sports league with a coaching diversity problem. In the United States, the NBA boasts the most diverse set of head coaches — yet fewer than half the coaches are black in a league whose players are about 75 percent African-American.

Still, even though an unexpected number of African-Americans have stayed in Israel after retiring from basketball, Watson and Goldstein both say many more would have created lives there if coaching positions had been available.

Watson counts himself among them. He looks back fondly on living in Israel — it’s where he spent his 20s, it’s where he reached his basketball-playing peak. These days, he works as an account manager at a Lifetime Fitness gym in White Plains.

Would he have stayed in the Jewish state had a promising opportunity opened up?