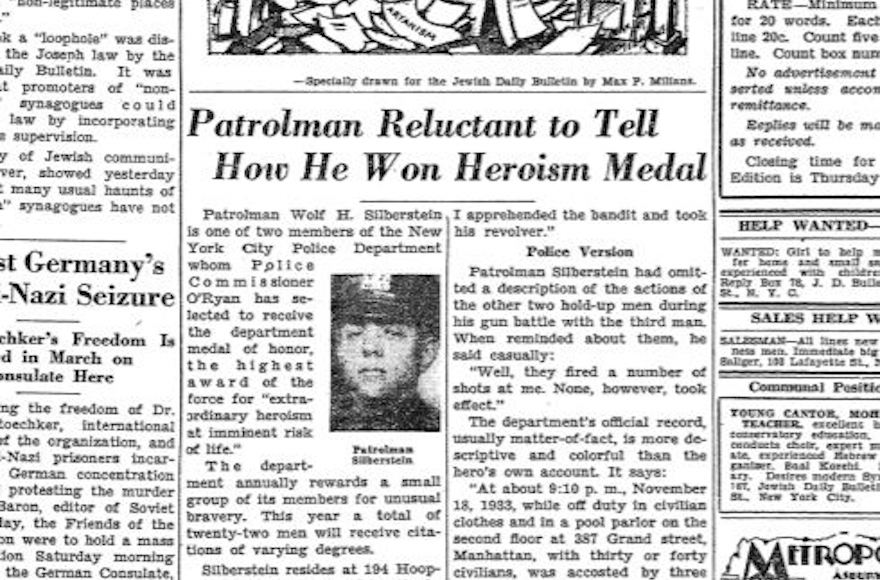 The JTA's Daily Bulletin of July 29, 1934, reports on an act of heroism by Patrolman Wolf Herman Silberstein. (JTA)
Advertisement

(JTA) — Paul Caine knew his late grandfather was a cop, a Yiddish speaker and a “wonderful father” to Caine’s mother, Pearl.

But he didn’t realize his grandfather was a hero — until he took a deep dive into the JTA archive.

The Jewish Standard reports on Caine’s search for the truth about his grandfather, Wolf Herman Silberstein, in its latest issue. Caine, a tech entrepreneur in Tenafly, New Jersey, knew his patrolman grandfather’s badge number, but found out more when he googled his name and a JTA article from July 29, 1934, popped up.

According to the article, titled “Patrolman Reluctant to Tell How He Won Heroism Medal,” Silberstein received the New York Police Department’s highest award for breaking up a robbery at a Lower East Side pool hall by shooting one of the suspects.

The article describes Silberstein as “reluctant to discuss the incident at all,” but then quotes him in juicy detail:

“It was in a licensed pool room, while I was off duty and in civilian clothes,” he explained. “The place is on the East Side, at 387 Grand Street. I was talking to some friends.

“In walked three men with revolvers in their hands. They ordered those who were in the room [about thirty-five altogether] to ‘move back against the wall and hold your hands up.’ While I was moving back with the others I drew my service revolver. One of the bandits had jumped onto a chair in the rear of the room and stood facing the crowd, brandishing his revolver.

“At this time I stepped away from the crowd and fired a shot at the bandit on the chair. He doubled up, stepped off the chair, and I fired another shot. He then ran along the wall opposite me, endeavoring to escape. I followed. When he was near the door I had to fire a third time, after which I apprehended the bandit and took his revolver.”

Silberstein also notes that the bandits “fired a number of shots at me. None, however, took effect.”

Caine’s mother, Pearl, tells Joanne Palmer, the editor of the Standard, that she didn’t find out about the gun battle in the pool hall until years later, when she discovered the certificate her father had been given. She later saw a photograph of Silberstein getting his medal from New York City Mayor Fiorello LaGuardia.

“I always remember how handsome my father was in his uniform,” said Pearl, who was 11 when he died of a heart attack in 1948. “I would be playing in the street when he’d come home, and I would run to him and jump into his arms. He took me rowing in Central Park. He was a wonderful father.”

Paul Caine also describes another act of heroism on his grandfather’s part: He was one of a group of New York City cops who helped to smuggle guns into Palestine when the Jewish community there was fighting for its independence from the British.

Caine found his grandfathers’s name in a Jerusalem Post article about Leon Katz, another cop, and how he and his fellow police would divert guns turned over to the department by former World War II vets and ship them off to the Jewish fighters in the Holy Land. At one point Silberstein had to to charm two FBI agents who were investigating rumors of gun running.

“The FBI agents were two Irish guys, and when my grandfather heard about it, he and his friends went and intercepted those two agents, and they went to a bar with them, and they drank together, and they bonded on their mutual hatred of Britain,” Caine said. “And in the end the Irish gents decided to drop the case.”

Silberstein died before he could visit the newly established Jewish state.