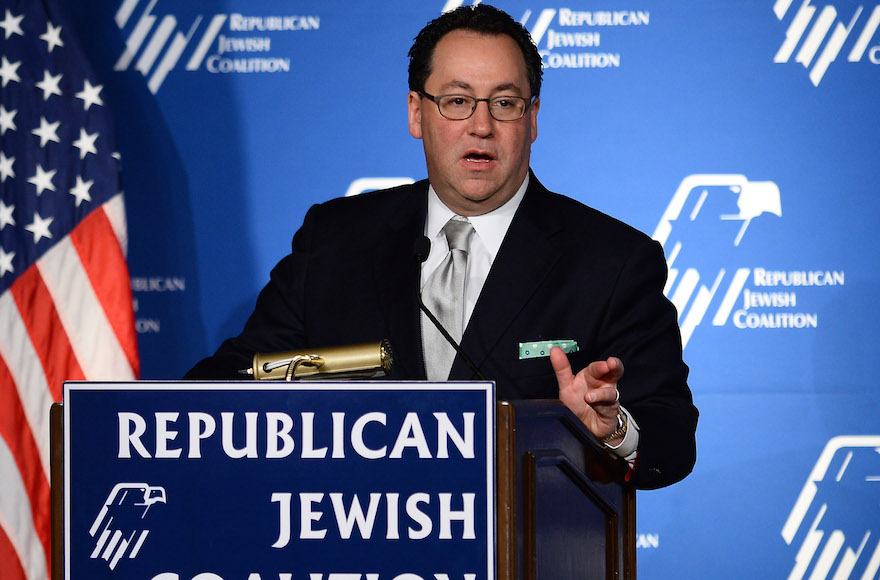 (JTA) — The Republican Jewish Coalition sent out a fundraising email this week accusing Jewish Democrats of unfairly linking the party to anti-Semites.

The pitch, with the subject line “Democrat anti-Semitism hypocrisy,” reads as follows:

Have you heard what Democrats are doing? Democrat groups are accusing Republicans of anti-Semitism in a hypocritical move to fundraise. Democrats are using the actions of a group of radicals who have no affiliation with the national Republican party to distract us from the blatant anti-semitism in their own ranks.

More on what the RJC means by “anti-Semitism in their own ranks” in a moment. Is it true Democratic groups are “accusing Republicans of anti-Semitism” in order to fundraise?

This is that appeal, signed by the JDCA chairman, Ron Klein:

Since President Trump’s election, now more than ever, we can’t afford to be complacent as American Jews. Anti-Semitism has roared back to life with surprising ferocity, as neo-Nazis march in Charlottesville and the president refuses to condemn them. We American Jews have to be on the front-lines of fighting for justice and equality. [There follows a description of the JDCA mission.] President Trump must be held accountable. Show them where the Jewish community stands by supporting the Jewish Democratic Council of America this #GivingTuesday.

Send a message to President Trump and his supporters in our community: You don’t speak for us! #NotInOurName”

The idea that anti-Semitism has “roared back to life” since Trump’s election has become a talking point among a number of Jewish groups, although the statistical evidence is ambiguous. On the other hand, ask the actual neo-Nazis and white supremacists what’s making them bolder, and they will say it’s Trump’s election and his embrace of an insular nationalism. Plenty of MAGA hats were visible at Charlottesville.

Trump did condemn the Charlottesville marchers, but only after a 24-hour firestorm following his initial remarks blaming violence on “many sides.” Many centrist Jewish groups regarded that as too little, too late, especially after a news conference the next day in which the president again blamed the counterprotesters, as well as right-wing extremists, for that Saturday’s violence. The largest nonpartisan Jewish groups didn’t accuse Trump of anti-Semitism, but did chide him for not using his bully pulpit to forcefully and consistently condemn the kind of racism and anti-Semitism on display in Charlottesville

Brooks, in a follow-up email, said J Street was also guilty of unfair guilt by association. A pitch by the liberal Mideast policy group’s director, Jeremy Ben-Ami, was sent after the Zionist Organization of America held a gala last month featuring Trump’s former top adviser, Steve Bannon, who has returned as the head of the “alt-right” favorite Breitbart News, and the U.S. envoy to Israel, David Friedman. Ben-Ami wrote:

[Eighty percent of our community] didn’t vote for Donald Trump, it fears and opposes most of his policy agenda, and it abhors the white nationalist hatred spread by the likes of Steve Bannon and Breitbart.

On the other side, there’s the extreme and vocal minority that embraces Islamophobes, racists and even anti-Semites — as long as they call themselves pro-Israel, defend the settlement movement and attack liberals.

This minority is small, but it’s dangerous — and its influence is clearly growing. That’s because, incredibly, it has the full support of the Prime Minister of Israel and the President of the United States — and the full financial backing of their shared favorite donor, Sheldon Adelson.

Bannon does not “embrace” anti-Semites, and has said he doesn’t welcome their support, although Breitbart News seems happy to occasionally flirt with them. And Adelson (and for that matter Brooks) have made clear that while they do not regard Bannon as an anti-Semite, they are not allied with him. The caveat: J Street is not the Democratic Party. The RJC’s pitch made it sound like these accusations were a Democratic phenomenon.

Back to the allegations in the RJC pitch that there was “blatant anti-Semitism” among Democrats:

Gillibrand, writing in Time magazine in April, praised Sarsour as one of the four women who organized the Women’s March in January. The blurb made no mention of Sarsour’s pro-Palestinian activism. Sarsour is anti-Zionist, but insists she is no anti-Semite. Accusing a Muslim of supporting Sharia law is like accusing an Orthodox Jew of supporting halachah. If the RJC means she seeks its imposition on the West, Sarsour has endorsed those who say Sharia law should not supersede the Constitution. Sarsour is a supporter of the movement to boycott Israel, and believes in a one-state solution for Israelis and Palestinians, which Israel and most Jewish groups regard as the dismantling of Israel as a Jewish state.