Why Jewish groups aren’t thrilled about the upcoming tax overhaul 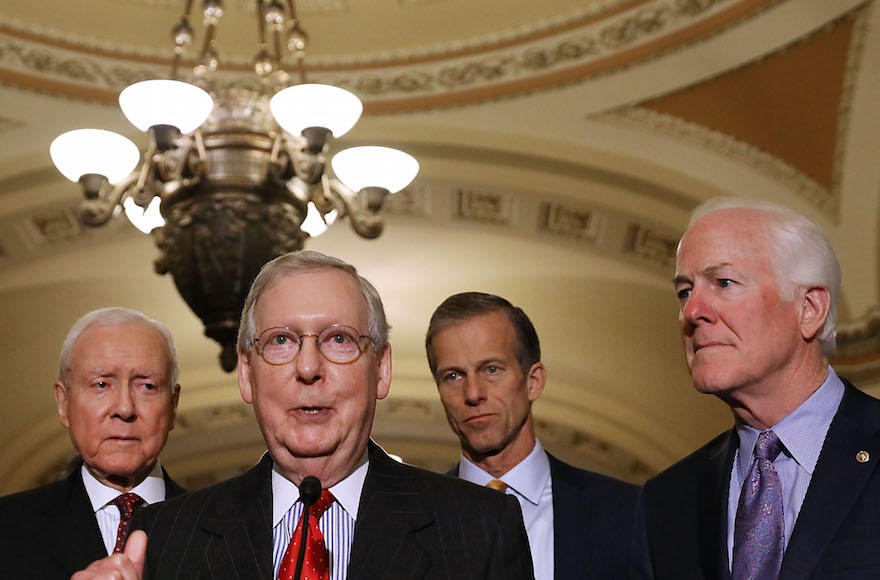 WASHINGTON (JTA) — Staring at a massive defeat, Jewish groups dealing with social safety net issues are looking at the tax plan about to reach its final stages in Congress and hoping they can snatch a few small victories.

The hope is that lawmakers in reconciling the bills preserve a number of elements of the Senate bill, particularly deductions for medical expenses.

B’nai B’rith International, which advocates for elderly care, cited the nonpartisan Congressional Budget Office’s estimate that the slashed taxes in the Senate and House bills would increase the deficit to $1 trillion. The measures ostensibly compensate for tax cuts by removing loopholes and deductions, but overall there will be massive losses in revenue.

That could encourage lawmakers to slash medical coverage entitlements like Medicare for older Americans and Medicaid for the poor, according to B’nai B’rith, the largest national Jewish sponsor of low-income housing for seniors.

“Many seniors would be at severe risk to not have the funds to cover basic housing, medical and food costs” were Medicare subsidies cut, the group said in its statement.

The House of Representatives passed its bill a month ago, while the Senate advanced its version over the weekend. This week, the chambers are likely to go into conference to reconcile the bills, which President Donald Trump wants on his desk before Christmas.

Jewish groups said they hoped the Senate version prevails for a number of reasons:

* It has more expansive allowances for itemized deductions which should also translate into more charitable giving. “As more taxpayers continue to itemize, there will be less negative impact on charitable giving,” the Jewish Federations of North America said in a memo Monday to its constituent federations.

The Senate version also does not touch current reporting for donor-advised funds, a giving vehicle that permits donors to work with federations to determine where the funds are spent on charitable purposes. It’s a key way for federations to expand their donor base.

“In sum, the Senate version of HR 1 is more favorable than the House-passed bill to the charitable sector in general and federations in particular,” William Daroff, the JFNA Washington director, said.

* It does not remove the so-called Johnson Amendment, which blocks houses of worship from directly campaigning for political candidates. An array of centrist and liberal groups oppose removing the amendment; conservative Christian groups want it gone. Trump campaigned last year for the removal of the amendment, named for Lyndon Johnson, who led its passage as a Texas senator in the 1950s. The House version removes it.

* The Senate version includes an amendment that would allow $10,000 a year in tax-exempt student savings plans to go toward private school tuition. Currently the monies are dedicated almost solely to university tuition. Sen. Ted Cruz, R-Texas, introduced the amendment, which is favored by Orthodox Jewish groups, and it passed by a 51-50 margin — Vice President Mike Pence cast the deciding vote.

“We are supporting the expansion of 529 education savings accounts to the K-12 level,” said Abba Cohen, Washington director for the haredi Orthodox Agudath Israel of America, using the tax code name for the savings plans. “Tax-free withdrawals will include private school tuition and could help some parents in the community better afford the high cost of Jewish education.”

One disappointment for Orthodox groups: At the last minute, lawmakers removed an amendment backed by Sen. Orrin Hatch, R-Utah, that would have allowed parents sending their children to religious school to deduct 25 percent of their tuition fees as a charitable contribution. The Orthodox Union had backed the amendment.