At Hanukkah reception, Trump basks in warmth of his Jerusalem recognition 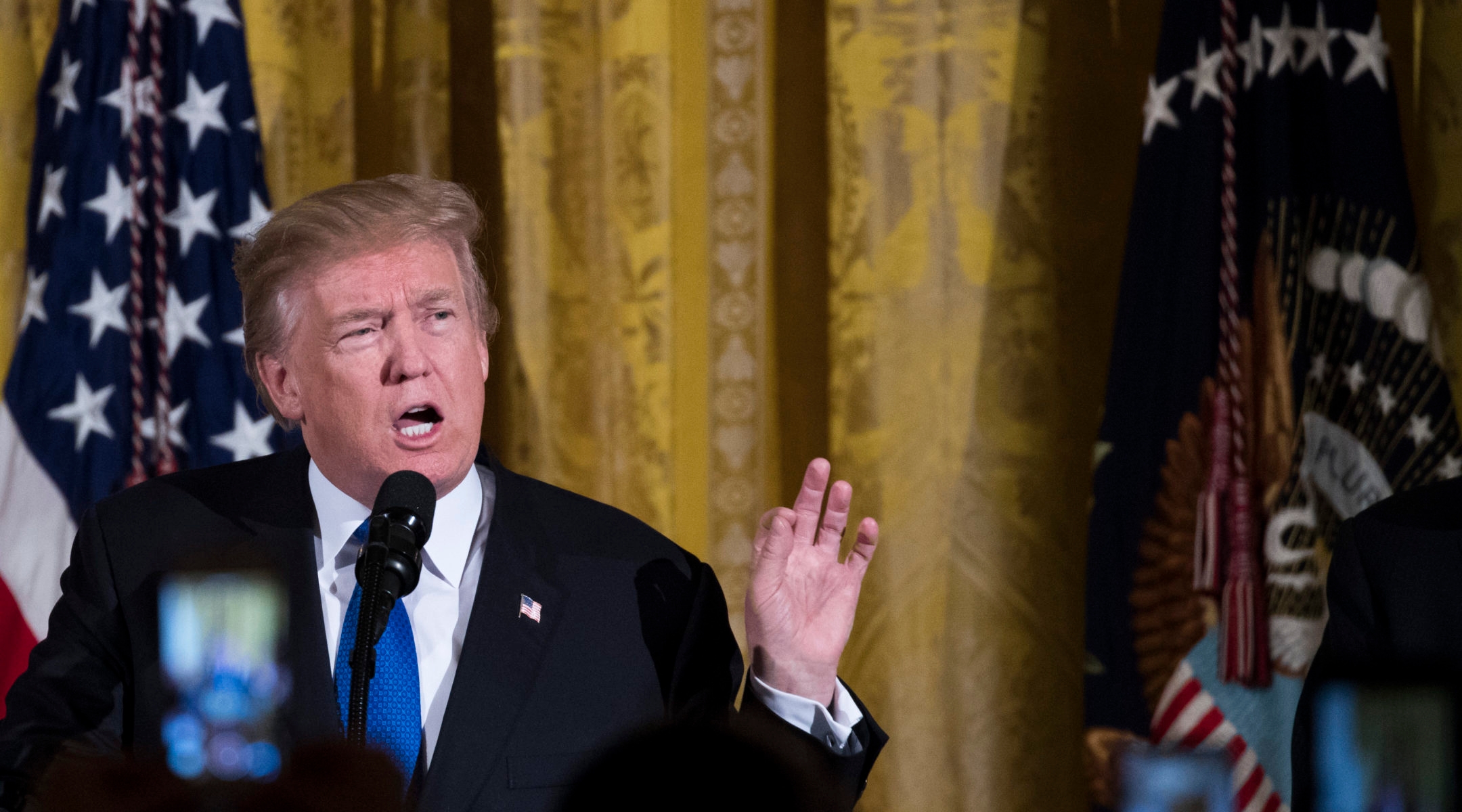 This year’s event came one day after the formal Jerusalem recognition and Trump directed the State Department to prepare for moving the U.S. Embassy to the city from Tel Aviv — a campaign pledge that both he and several former presidents had made but which until now had been unimplemented.

“Well, I know for a fact there are a lot of happy people in this room,” he told the dozens of guests at the reception Thursday night, clarifying with one word what he meant: “Jerusalem.”

Yet the president devoted most of his speech to conventional Hanukkah greetings, mentioning the “miracle of the Maccabees” and how “they found only enough oil to light the lamp for a single night.”

That the lamp burned for eight days – the miracle celebrated by Jews around the world on Hanukkah – shows “God’s presence in his dwelling place and a symbol of the faith and resilience of the Jewish people. You do have faith and you do have resilience,” Trump said.

Later he said, “The miracle of Hanukkah is the miracle of Israel. The descendants of Abraham, Isaac, and Jacob have endured unthinkable persecution and oppression. But no force has ever crushed your spirit, and no evil has ever extinguished your faith.”

Trump was standing by his wife, Melania. Beside them was his daughter Ivanka and her husband, senior adviser Jared Kushner, and the president’s grandchildren, whom he noted are Jewish.

“I am also proud that my beautiful grandchildren — Arabella, Joseph and Theodore — have joined us tonight right here as we celebrate with all of you the sacred traditions that they observe each year at home,” Trump said.

Vice President Mike Pence, his wife, Karen, and Rabbi Meir Soloveichik also were on hand. Soloveichik is director of the Zahava and Moshael Straus Center for Torah and Western Thought at Yeshiva University, and the rabbi at Congregation Shearith Israel in Manhattan.

A Holocaust survivor, Louise Lawrence-Israels, spoke at the event about hiding as a young girl in an Amsterdam attic.

Jewish Cabinet officials Steven Mnuchin and David Schulman, secretary of the Treasury and Veteran Affairs, respectively, and Trump’s special Middle East peace envoy Jason Greenblatt, who also is Jewish, were among the guests.

Supreme Court Justice Stephen Breyer, who is Jewish, was at the reception wearing a kippah. Breyer was appointed to the high court by former President Bill Clinton, but there were no notable Democrats at the event, The Times of Israel noted.

Congressional Democrats, as well as Jewish leaders who have been critical of Trump, were excluded from the guest list, The New York Times reported.

“It’s deeply unfortunate that the White House Hanukkah Party — a bipartisan event bringing together Jewish and non-Jewish leaders alike to celebrate the Festival of Lights since 2001 — has turned into a partisan affair under this administration,” Rep. Nita Lowrey, D-N.Y., told the Times in a statement.

The White House denied that politics played a role in the invitations.

“I am not aware of the political affiliation of any of the guests, but I do know that this year was meant to be more personal than political,” first lady Melania Trump’s spokeswoman Stephanie Grisham told the Times.