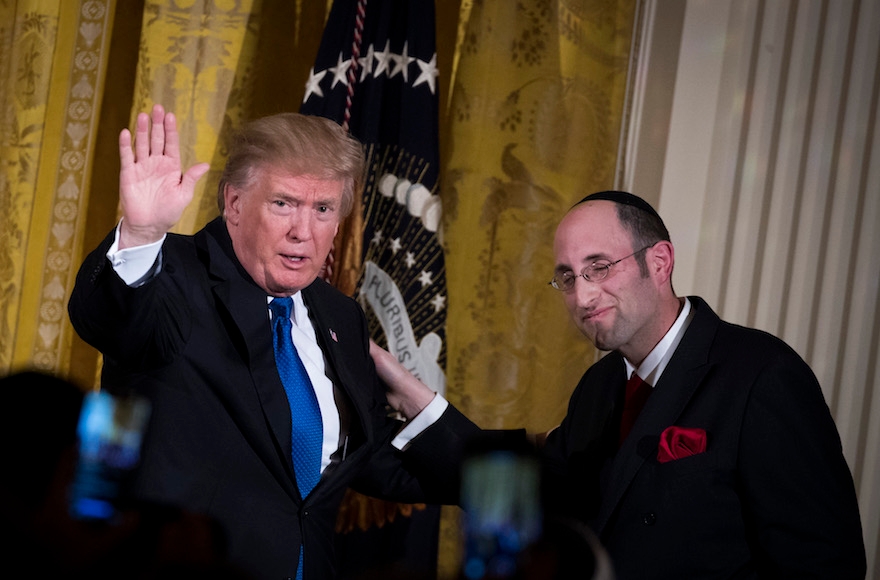 Donald Trump with Rabbi Meir Soloveichik at a Hanukkah Reception in the East Room of the White House, Dec. 7, 2017. (Drew Angerer/Getty Images)
Advertisement

WASHINGTON (JTA) — President Donald Trump said he was “proud to stand with the Jewish people” on Hanukkah.

“Melania and I wish all of our Jewish brothers and sisters celebrating this meaningful holiday a happy and healthy eight nights in the company of those they love,” Trump said in a message Tuesday evening, the first night of the eight-day holiday, and naming the first lady.

“On this holiday, we are proud to stand with the Jewish people who shine as a light to all nations. We also stand with the people of Israel, the Jewish State, which has itself a miraculous history of overcoming the tallest of odds,” the statement said.

Trump’s director of the National Economic Council, Gary Cohn, lit the “national menorah” on the National Mall, an event organized by American Friends of Lubavitch. He noted that Trump last week recognized Jerusalem as Israel’s capital, breaking with predecessors who held back from full recognition.

“President Trump delivered on a promise to recognize Jerusalem as the capital of Israel,” said Cohn, who clashed with Trump this summer over Trump’s equivocal remarks after white supremacists and anti-Semites marched in Charlottesville, Virginia.

“The president made the right decision and it makes these year’s celebration of Hanukkah particularly meaningful,” he said. There were strong winds in Washington, and Cohn’s kippah flew off his head at least once.

Trump continued the tradition established by President George W. Bush and carried on by President Barack Obama, and had a Hanukkah party at the White House last week, where he noted his recognition of Jerusalem as Israel’s capital.

Later this week, Jewish members of Congress will host a Hanukkah party at the Library of Congress. In previous years, the congressional party has been hosted only by Democrats, led by Rep. Debbie Wasserman Schultz, D-Fla. This year for the first time, Wasserman Schultz is co-hosting the party with a Jewish Republican, Rep. Lee Zeldin, R-N.Y.