Israel’s first Arab Rhodes scholar has the chutzpah to love her country, and to try to change it 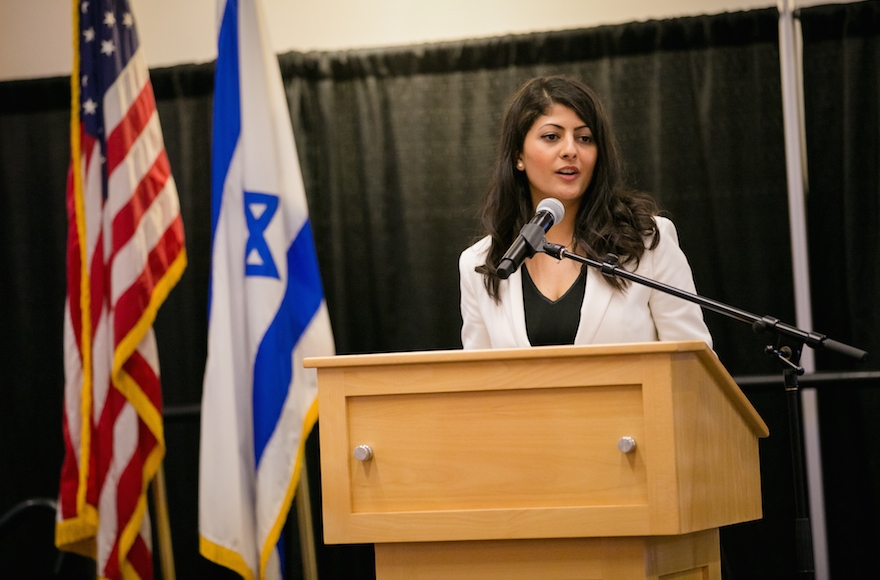 TEL AVIV (JTA) – Lian Najami, Israel’s first Arab Rhodes scholar, is the kind of person who can be optimistic about just about anything — including having a needle stuck in her spine.

As she waited in a Haifa hospital Wednesday morning for a lumbar puncture, Najami expressed hope that the procedure would finally put a name to her degenerative neurological disorder. After that, she said, anything was possible.

“Once we know what it is, we should be able to treat the symptoms better, and maybe one day we will find a cure,” she said in a telephone interview. “I’m really excited to see where the world is going to take me next.

“As an Israeli, I guess I have that chutzpah,” she added. “I always have in mind: What can I do from here?”

When Najami, 23, won the prestigious Rhodes scholarship last month, it was the latest of many affirmations of her relentlessly forward-looking worldview. The honor, which provides a free education at Oxford University, was also an opportunity to advance her advocacy work to make Israel a more inclusive place for people like her: a disabled Arab Muslim woman.

Najami has become a sought-after public speaker on behalf of her country. In recent years, the Haifa native was a featured speaker on leading U.S. campuses like Harvard and Brown, at the Forbes 30 Under 30 Summit EMEA in Israel, and at events in Germany organized by the Israeli Embassy.

Her message: Arab Israelis, who make up some 20 percent of Israel’s citizenry, can succeed in the Jewish state. She has held herself up as living proof.

“I was able to get a great education in Israel, and my social worker really gave me a lot of help and confidence in dealing with my disability, or what I like to call my different ability,” she said.

In addition to her public speaking career, which has been facilitated by her fluency in five languages (Hebrew, Arabic, English, German and Spanish), Najami graduated from the University of Haifa in 2016, where she studied political science and international affairs.

This year, she worked as a fellow in Washington, D.C., for U.S. Sen. Brian Schatz, a Jewish Democrat from Hawaii, analyzing counterterrorism strategies, making policy recommendations, and drafting bills and resolutions. She also helped draft the senator’s speech decrying President Donald Trump’s ban on travel to the United States from seven Muslim-majority countries in which he invoked his own Jewish immigrant ancestors.

However, none of Najami’s previous accomplishments made joining the exclusive ranks of Rhodes scholars  — they were extended last year to include Israelis for the first time — any less exciting. She said she “could not stop crying” after getting the news, and her father is still bragging to friends and acquaintances.

“My family is very happy for me to be the first Arab Israeli to break that barrier and send a message to the Arab society within Israel that there is nothing to stop them,” she said. “I keep getting phone calls from my dad saying, ‘OK, I’m with this person,’ and then he hands over the phone for me to explain the whole thing again.”

Fortunately, Najami is a polished speaker. When it comes to the Boycott, Divestment and Sanctions movement against Israel, for example, she has made the case that it hurts all Israelis — including some of the Arabs it is supposed to help.

“As an Arab Israeli, I would like to tell them, ‘No thank you,'” she said. “Academic boycotts especially prevent us from exchanging and challenging ideas, and that is something we want here.”

Her Israel advocacy has helped make her something of a hero to many Jews.

“Lian is a prime example of why the allegations that Israel oppresses its minorities are false,” said Karen Berman, the CEO of the American Society of the University of Haifa. “To see someone like her receive the Rhodes Scholarship is truly a testament that this is a true meritocracy.

“And on a personal level,” Berman added, “she’s just so lovely and inspiring.”

On the other hand, some Arabs have criticized Najami for allegedly choosing Jewish nationalism over the Palestinian cause — and whitewashing Israel’s oppression of Arab Israelis and Palestinians.

“They don’t understand why I need to speak out for Israel,” she said. “I tell them I’m coming from an agenda of really wanting to let the Arab-Israeli voice be heard, and to make sure the Arabs in Israel are treated equally to Jews.”

Like most Arab Israelis, Najami said she is a proud citizen of her country but would not call herself a Zionist. However, she does not identify as Palestinian, she said, explaining that she has not endured the same hardships as her family members living in the West Bank.

She is adamant that Israel should be a democracy for all its citizens, and is critical of ways she sees it failing to live up to this ideal. As an example, she said Israel fails to invest sufficiently in Arab communities and denies Arabs equal access to land.

To Najami, Israel is at its best in her hometown of Haifa, where Jews and Arabs live together. She said growing up there, in a highly integrated neighborhood, gave her an early understanding that coexistence is possible. Her first friend was a Jewish girl.

“When I got older and people would come and say, ‘Oh, Jews are like this or Arabs are like this,’ and stuff like that,’ I would be like, ‘Wait a second, Rita is Jewish but she’s nothing like what you’re saying, so maybe you shouldn’t be generalizing people and stereotyping,’” Najami said.

Najami and her fiance, Joe Ryan-Hume — a Scottish man with a doctorate in American political history whom she met while working in Congress — are making plans to move to England this summer. In the fall, Najami will start a master’s degree at Oxford, where she will study comparative politics with a focus on inclusion policy. She said she hopes to bring some of the lessons she learns back to Israel.

Najami’s seemingly relentless positivity applies to everything, from her approach to the Israeli-Arab conflict to her personal life. Dealing with a neurological disorder from a young age, she said, has taught her to focus less on grievance and fear and more on solutions.

“I got this chronic illness at the age of 12, when I was dancing, and running and playing football, and suddenly I couldn’t,” she said. “I could have easily played the victim, but I decided to just not focus anymore on who I was, and start focusing on what’s ahead of me and who I can be.

“That also how I look at Israel today. What we should be looking at is, how do we advance from here? How do we incorporate all the people who live in this country and find a way to live together?”