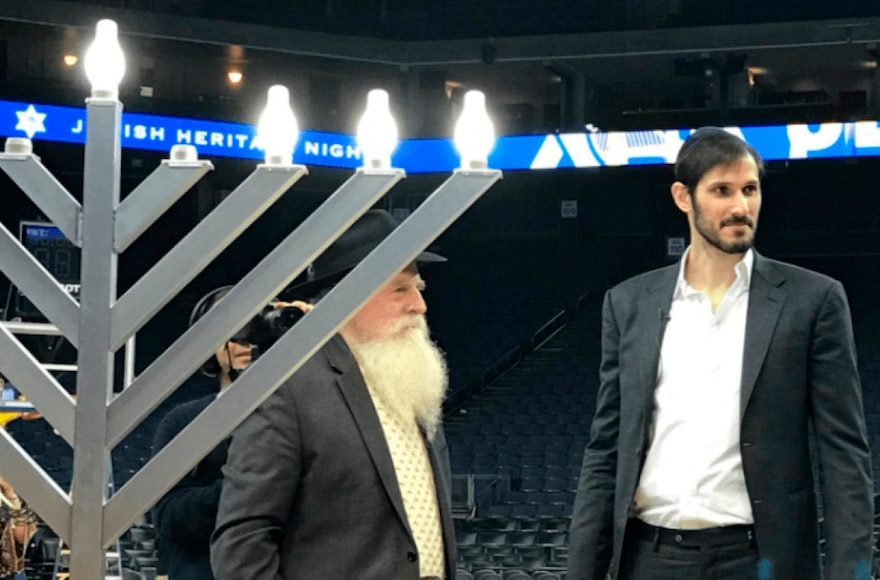 (JTA) — Omri Casspi, the first Israeli to play in the NBA, helped lead the Golden State Warriors to their eighth straight win, then celebrated by lighting a giant Hanukkah menorah as part of the team’s Jewish Heritage Night.

Casspi scored 17 points and had 11 rebounds in the Warriors’ victory over the Dallas Mavericks on Thursday, the third night of Hanukkah, J. The Jewish News of Northern California reported. It was among the top performances of his nine-year NBA career.

After the game, Casspi helped light a menorah almost as tall as the 6-foot-9 forward. He chanted the Hanukkah prayers with Rabbi Yosef Langer, executive director of Chabad of San Francisco, as hundreds of Jewish fans — some attending their first Warriors game — looked on at Oracle Arena.

Casspi told the newspaper that lighting the menorah on the Warriors’ court was a “privilege, it just means the world to me.”

Danny Grossman, CEO of the San Francisco-based Jewish Community Federation, was at the game along with other community and spiritual leaders, and said it was appropriate that Casspi had his best night since joining the Warriors in July on a one-year deal.

“It can’t be coincidental, it had to be a Hanukkah miracle,” Grossman told J.

The crowd attending the menorah lighting ranged from those wearing yarmulkes and black hats to bare-headed Jews in Warriors garb, according to the newspaper.

Casspi, 29, has played for six NBA teams, including five seasons in two stints with the Sacramento Kings. He was signed in March as a free agent by the Minnesota Timberwolves nearly a month after being waived by the New Orleans Pelicans — his second stint with the team — after breaking his thumb in his debut with the club. He has also played for the Cleveland Cavaliers and Houston Rockets.

He was a member of the championship Maccabi Tel Aviv team in Israel before making himself available for the NBA Draft.