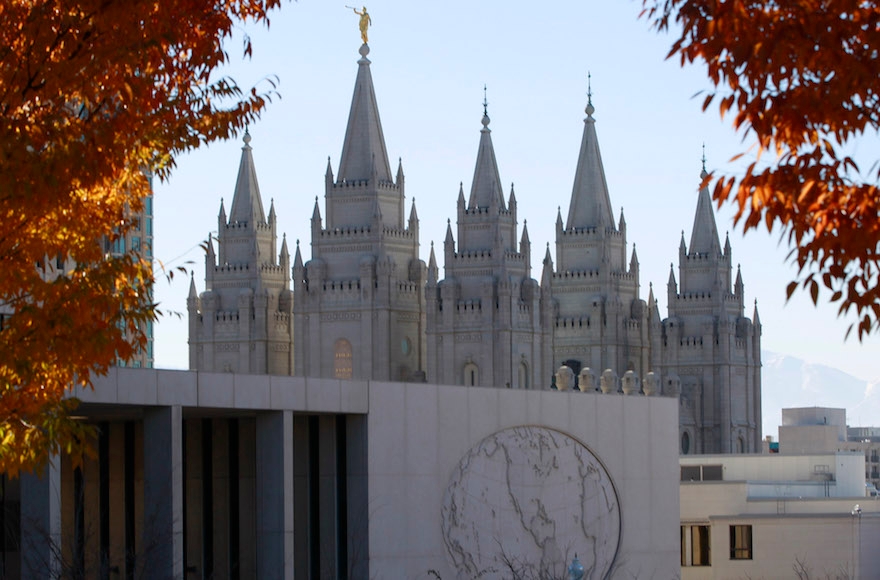 (JTA) — A researcher says Mormons have posthumously baptized the late Lubavitcher rebbe, the grandparents of Carrie Fisher and Steven Spielberg, and hundreds of Holocaust victims, violating an agreement to halt the practice.

Helen Radkey, a Salt Lake City-based independent researcher who has been looking into the Mormon practice of posthumous baptisms for two decades, said there are hundreds of examples of Jewish Holocaust victims being baptized in Mormon churches around the world since 2012. In a report released this week, she shared names of 20 such people who had been baptized.

“There are at least hundreds, probably more,” Radkey, a former Mormon who was excommunicated from the church in 1978, told JTA on Thursday.

The names cited by Radkey refer to Holocaust victims baptized from April 2012 and onward. In March 2012, the Mormon church, formally known as the Church of Jesus Christ of Latter-day Saints, sent a letter to its congregations reiterating a 1995 policy that members should only do posthumous baptisms on their own ancestors and forbidding baptisms of Jewish Holocaust victims and celebrities.

In addition to hundreds of Holocaust victims, Radkey claims to have found other examples of famous Jews being baptized. For example, she says the late Chabad-Lubavitch leader Rabbi Menachem Mendel Schneerson and his father, Rabbi Levi Yitzchak Schneerson, were baptized in 2015. So were  philosopher Martin Buber in 2016, and the grandparents of Spielberg and Fisher in 2015 and 2017.

Radkey found the names in FamilySearch, a website used by Mormons to trace family lineages and submit requests for proxy baptisms. Her study was first reported by The Associated Press.

The practice of proxy baptisms is a controversial one. Mormons are instructed to perform baptisms on dead relatives who did not have the opportunity to convert to the church. However, in the 1990s it was discovered that Mormons had performed such rites on hundreds of thousands of Jews who died in the Holocaust. This angered Jewish groups, which said the practice disrespected the victims’ religious beliefs.

In 1995, the Mormon church reached an agreement with Jewish leaders to cease the practice, and it was emphasized in the 2012 letter.

Radkey also says she found examples of family members of famous politicians, including Presidents Donald Trump,  Barack Obama and Bill Clinton, as well as relatives of celebrities such as Kim Kardashian, being posthumously baptized.

Eric Hawkins, a spokesman for the Church of Jesus Christ of Latter-day Saints, said the church was doing its part to ensure there were no posthumous baptisms.

“The Church cares deeply about ensuring these standards are maintained,” he said in a statement. “Each month, we receive a list of names of Holocaust victims from the [Simon] Wiesenthal Center in Los Angeles. These are added to our database of names that require a direct family connection before temple work can be requested or performed.”

Four full-time employees at FamilySearch monitor the site for names of Holocaust victims and others that should not be added, Hawkins added.

The Anti-Defamation League, which has worked with the Mormon church on the issue, said the church was doing its part to prevent Holocaust baptisms.

“My sense is that they are making every good faith effort to first of all block these before they happen, [and] if in the case that something slips through and they become aware of it, they then remove it and reverse it,” ADL’s director of interfaith affairs, Rabbi David Sandmel, told JTA on Friday. “I’m satisfied that they take this seriously and that they are doing the best they can to fulfill the commitment they made on this.”

However, Gary Mokotoff, a Jewish genealogist who has been involved in the issue, begged to differ.

“If the problem still exists, whatever the church is doing to prevent it is not working” Mokotoff told JTA on Friday.

“A single person called Helen Radkey can find hundreds, if not thousands, of examples of Holocaust victims being submitted for posthumous baptism, then why can’t the church, which claims they actually have people working on it, find the very thing that Helen is finding?” he asked.

Mokotoff, who has relatives that died in the Holocaust, said the baptisms of Nazi victims were particularly jarring.

“These people died because they were Jews,” he said, “and here you are bringing them into a second religion even though these people are not related to you.”

The Simon Wiesenthal Center said the idea that Jews needed to be baptized was offensive. The parents of the center’s namesake, famed Nazi hunter Simon Wiesenthal, have previously been baptized by Mormons.

“We were sure that these baptisms were removed but we’re seeing that they’re not,” Rabbi Marvin Hier, the center’s founder and dean, said in a statement emailed to JTA. “We reiterated yet again the reasons we protested that it’s insulting that the People of the Book whom G-d made a Covenant would need the assistance of a group of Mormons to gain entrance to Heaven.”