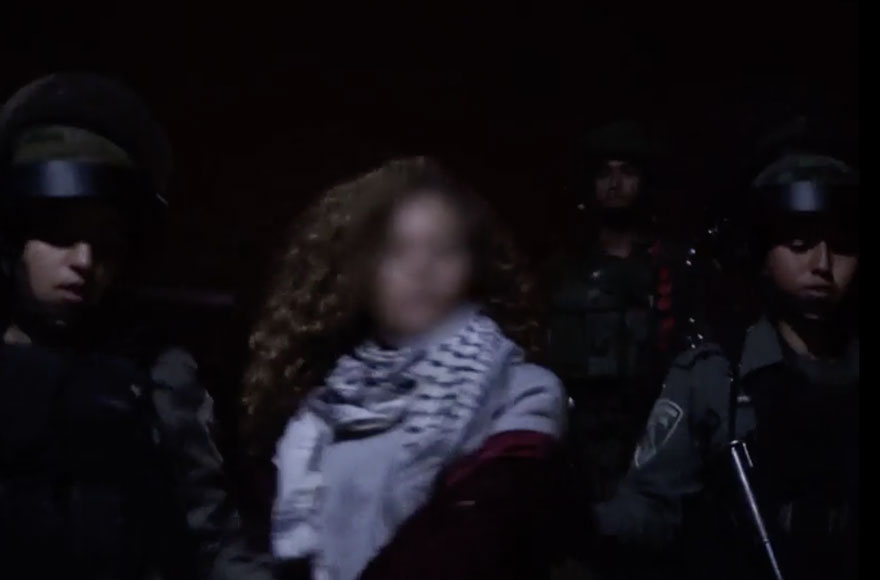 JERUSALEM (JTA) —  An Israeli court has extended, by four days, the detention of a Palestinian teenager who was filmed slapping and harassing Israeli soldiers in the West Bank.

Ahed Tamimi, 17, was arrested on December 19, days after she, her cousin, Nour Tamimi, and her mother, Nariman, were caught on camera slapping and harassing the soldiers in an apparent attempt to provoke a violent response. The video went viral on social media.

The court on Monday also extended by four days the detention of Nour Tamimi and Nariman Tamimi.

The Israel Defense Forces said the teen was arrested for taking part in violent riots in the West Bank village of Nabi Saleh, where she and her family live.

Nariman Tamimi is accused of incitement for filming the incident and posting it on Facebook, according to Haaretz. They reportedly also are believed to have been involved in other attacks on Israeli soldiers.

The Tamimis are well-known anti-occupation activists. Two weeks ago, Israeli troops shot a male cousin, 15, in the face with a runner bullet, and he was for several days in a medically induced coma, an incident that the family says prompted the girls to push the soldiers away from the family home.

Police said the extension of their detention was necessary because Ahed Tamimi poses a “danger,” and to prevent obstruction of the investigations, Haaretz reported.

Ahed Tamimi is well known as a leader of youth protests against Israeli soldiers in the West Bank.

The video and her arrest set off wide debate within Israel, among some who felt the soldiers should have acted more quickly and forcefully; others who insisted they showed admirable restraint; and still others who felt Israel is persecuting the Tamimi family.