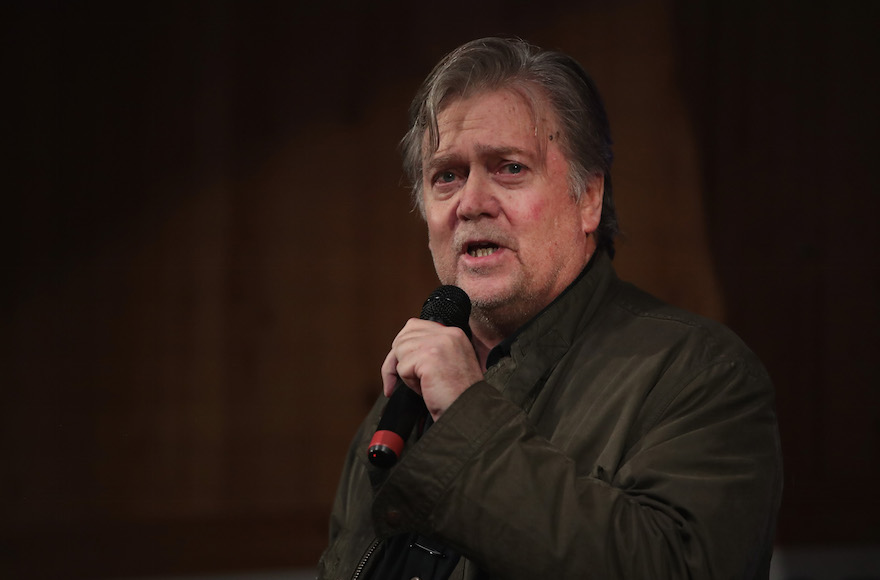 “Bannon cut all ties with him and tossed him to the curb,” tweeted Arthur Schwartz, an adviser to Bannon, the former adviser to President Donald Trump who has become a leading influence on the Republican right.

Nehlen is running in 2018 to unseat Rep. Paul Ryan, R-Wis., the speaker of the U.S. House of Representatives. In 2016, Breitbart and Bannon enthusiastically endorsed and supported Nehlen’s bid to unseat Ryan. Nehlen embraced many of Bannon’s positions, including a rejection of the Republican establishment, a call for a crackdown on illegal immigration and limits on legal immigration.

The effort was a monumental failure: Ryan won the 2016 primary in Wisconsin’s First District with 84 percent while Nehlen, a businessman, won 15 percent of the vote.

Nehlen has since positioned himself as pro-Israel but also has embraced anti-Jewish themes in social media.

“Hey, American Jews, I’m not putting Israel first or compromising pro-White interests for yours, but I will make sure the Islamists who want to murder you (and annihilate Israel off the map) are deported back to their homelands,” he said Tuesday on Twitter. “That’s something, right?”

He also retweets Jewish hostile commentary by his defenders. “Oh look, another Jew that is so angry that Israel didn’t appear on @pnehlen’s list of priorities, he suggests this is WWan Germany all over again,” said one follower, referring to an attack on Nehlen by conservative writer Jonah Goldberg. “‘Oy vey, it’s anuddah shoah!’ he cries out as he calls you Hitler for not putting Jewish interests first.”

Nehlen has also embraced the white supremacist slogan “It’s okay to be white.”

Bannon has said that Breitbart is a platform for the “alt-right,” a loose grouping of anti-establishment Republicans that includes racists and anti-Semites. But he has also said he hopes to drive bigots away from its ranks.

When he was an advisor to Trump, he counseled the president on policies and positions that are believed to have encouraged white supremacists to identify with Trump. Bannon advised Tump, for instance, not to forcefully condemn the white supremacists who marched in Charlottesville, Virginia in August, an event that included a deadly attack by a white supremacist on a crowd of counterprotesters.