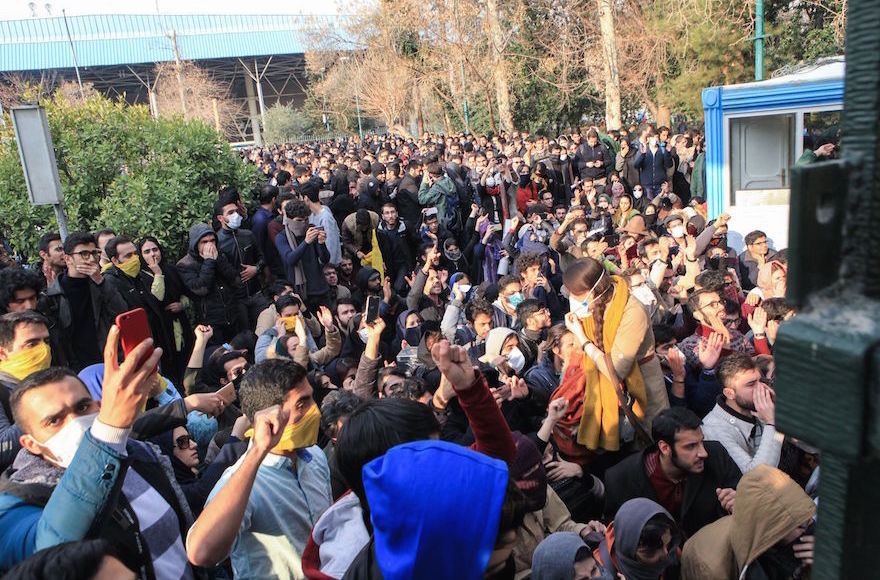 WASHINGTON (JTA) — Iranians are taking to the streets in spontaneous demonstrations across the country to protest government corruption and a failing economy.

The depth and breadth of popular Iranian anger have taken the West by surprise, nowhere more so than in Washington, where the focus on Iran since Donald Trump assumed the presidency has been on whether he would preserve the 2015 nuclear deal.

Until Dec. 28, this was the calculus: Would Trump kill the agreement or be content with dismissing it as “the worst deal” in history? The deal forged between Iran and six major powers trades sanctions relief for a rollback of Iran’s nuclear program.

Now the question is whether Trump sees the demonstrations and their repression by Tehran as an additional spur — or even the last straw — that would convince him to pull the United States out of the pact.

On Dec. 28, anti-inflation protests broke out in Mashhad, Iran’s second-largest city and generally a stronghold of support for the theocracy. They quickly spread, fueled by anger not just at economic mismanagement but at Iran’s military adventurism overseas. At least 20 protesters have been killed.

The feared Revolutionary Guard Corps has joined in the crackdown and the country’s supreme leader, Ayatollah Ali Khamenei, has sought to blame outsiders for spurring the protests.

Trump has yet to say how the protests affect the nuclear deal, but he has condemned the crackdown and warned Iranian leaders that he is watching their actions.

“Such respect for the people of Iran as they try to take back their corrupt government,” Trump said Wednesday on Twitter, his seventh tweet about the uprising since it began a week earlier. “You will see great support from the United States at the appropriate time!” 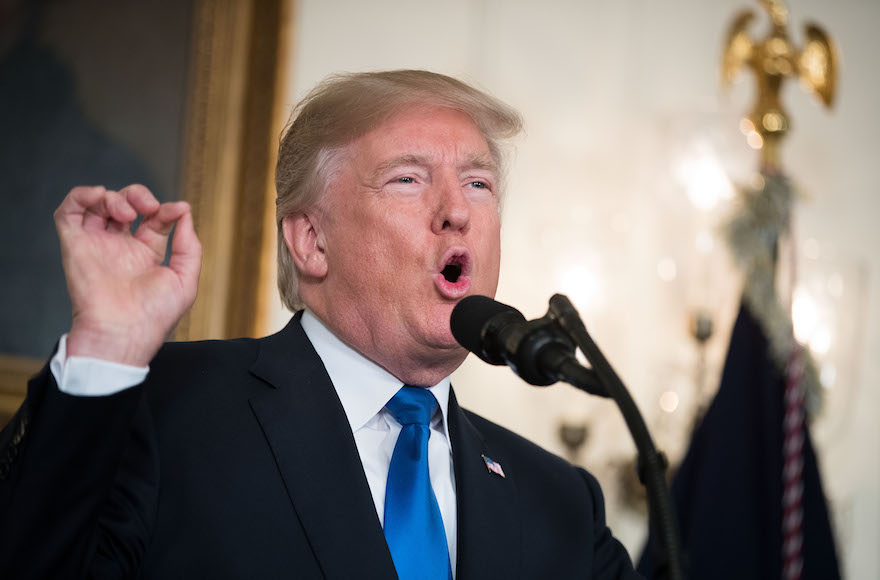 President Donald Trump speaking at the White House on the administration’s strategy for dealing with Iran, Oct. 13, 2017. (Drew Angerer/Getty Images)

In a Washington Post op-ed published Thursday berating the Obama administration for its handling of Iran, Vice President Mike Pence said that additional actions definitely were an option, given the latest protests.

“We have already issued new sanctions on Iran’s Islamic Revolutionary Guard Corps, and the president is weighing additional actions to punish the regime for its belligerent behavior and assault on its own citizens,” Pence wrote.

Would those include resuming the narrow nuclear-related sanctions relaxed as a result of the Iran deal? Pence did not spell that out, but he blamed the Iran deal for enriching the regime and enabling it to crack down on its citizens.

* Whether to certify Iran’s compliance with the deal: Under a 2015 law passed by a Congress skeptical of President Barack Obama’s agreement, the deal requires certification every 90 days. Trump refused to certify the last time the 90 days were up, in October, effectively punting the issue to Congress. Doing so again would have the same effect; it would be up to Congress to reimpose sanctions.

Congress demurred last time because no one at the time wanted responsibility for killing a deal that much of the world believes is working. Widespread revulsion at oppression of the protesters, if it intensifies, could change that calculus.

We asked experts who favor and oppose the Iran deal two questions: How would the protests influence Trump’s decision-making on whether to stick with the deal? And is there a connection between the deal and the protests?

Here’s what they had to say.

The protests may be the straw that breaks the deal’s back.

Mark Dubowitz, the director of the Foundation for Defense of Democracies, who has counseled the White House on its Iran strategy, said the protests could spur Congress and America’s European allies to finally take up Trump’s challenge in October. That’s when the president refused to certify Iranian compliance with the deal and essentially said his goal is to “fix it or nix it” — amend the terms or walk away.

Dubowitz said the protests “may increase the incentive for all sides to come together and find a legislative solution.”

“The protests reinforce the administration’s view that the Iranian regime is an odious, expansionist and destructive force in the Middle East,” he said. “Its foreign adventurism and domestic repression must be confronted using all instruments of American power.”

Richard Goldberg, a former top Senate aide who helped shape the nuclear sanctions, said it made little sense for Trump to waive them now.

“With people pouring into the streets crying out for a new regime, it’s hard to imagine how the president waives sanctions and keeps money flowing into the regime’s coffers,” he said. “Whether you were a supporter or opponent of the nuclear deal, nothing should hold us back from siding with the people and against their oppressors.”

The protests are exactly the wrong time to end the nuclear deal.

Dan Shapiro, who was Obama’s ambassador to Israel from 2011 until a year ago, said scrapping the deal would play into Khamenei’s claims that outside actors are trying to influence the protests.

“It would undercut one of the areas where protesters are rightfully blaming the regime for squandering relief on supporting terrorists and foreign adventurers,” said Shapiro, who is now a fellow at Israel’s Institute for National Security Studies.

Daryl Kimball, who directs the Arms Control Association, said killing the deal would be a gift to Khamenei.

“If Trump decides to reimpose the nuclear-related sanctions waived under the terms of the Joint Comprehensive Plan of Action, he will be creating a nonproliferation and security crisis and providing top Iranian officials — particularly Ayatollah Ali Khamenei — a propaganda bonanza,” Kimball said. “If Trump unilaterally reimposes all the nuclear sanctions, it will allow the Iranian regime to blame the U.S. for the regime’s failures to address the grievances of those who are marching in the streets.”

Additionally, Shapiro said, it was not in the West’s interest to free an Iranian regime already rattled by the protests to accelerate a nuclear breakout. The Iran deal, for at least 10 years, keeps Iran a year away from a nuclear bomb.

If sanctions were lifted, he said, “We could be right back to Iran two to three months away from a nuclear breakout.”

Alireza Nader, a senior Iran expert at the Rand Corp., a think tank that frequently consults with the Pentagon, said it made no sense to rattle the Iran deal when there were many other non-nuclear sanctions options that could squeeze the regime. Taking Iran off the list of Muslim-majority nations whose citizens are banned entry to the United States would be a signal to Iranians that the United States is heeding their plight.

Another measure would be to remove sanctions on U.S. information firms doing business in Iran, Nader said. That would “make sure that Iranians have access to technology that gets information in and out of Iran,” he said.

On Thursday, a top Trump administration official said freeing technology use for Iranians was on the agenda.

“It is absolutely a core U.S. interest that this information flow into Iran and the operation of key social media platforms like Telegram, like Instagram, is preserved,” Andrew Peek, the deputy assistant secretary of state who handles Iran, told the BBC’s Persian service. He also said that sanctions were in the works targeting individuals who violated human rights.

The nuclear deal helped get us here, in a bad way.

Deal opponents say the nuclear deal freed up cash that the Iranian regime is now using to fund its military adventurism — and to repress protests.

In his op-ed, Pence said the pact “flooded the regime’s coffers with tens of billions of dollars in cash — money that it could use to repress its own people and support terrorism across the wider world.”

The nuclear deal helped get us here, in a good way.

Obama-era officials sent mixed messages on the deal when it was being negotiated. Some, like Secretary of State John Kerry, hoped it would moderate the regime. Others, like Treasury Secretary Jacob Lew, argued that taking a nuclear threat off the table — however temporarily — made it easier to squeeze a recalcitrant Iran for its other bad acts.

Nader of the Rand Corp. said the latter argument appears to have been validated, to a degree: Non-nuclear sanctions that Obama kept in place and Trump has reinforced have afflicted Iran’s economy, helping to spur the uprising. But the real villain is the regime’s incompetence and corruption.

“The economy in Iran is abysmal, and U.S. sanctions have contributed to that,” he said. “But the No. 1 blame should go to the Iranian regime for being corrupt.”