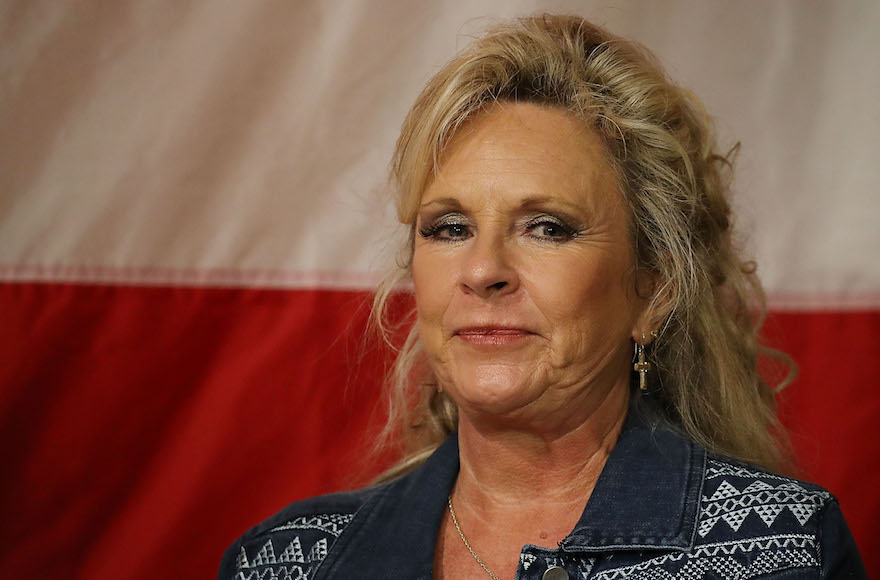 Kayla Moore at a campaign event for her husband Roy Moore in Fairhope, Ala., Dec. 5, 2017. (Joe Raedle/Getty Images)
Advertisement

WASHINGTON (JTA) — The Jewish lawyer Roy Moore’s wife invoked to defend the candidate against charges of anti-Semitism is, in fact, a convert to Christianity.

Kayla Moore told Al.com, an Alabama news site, on Thursday that when she said last month, as the Alabama Senate race headed into its final stretch, that “one of our attorneys is a Jew,” she was referring to Martin Wishnatsky.

Wishnatsky, 73, converted to Christianity when he was 33. He was first a Mormon and then an evangelical Christian.

After obtaining a law degree in his 60s, Wishnatsky clerked for Roy Moore when Moore was Alabama’s chief justice, and now works for the advocacy group run by the Moores, the Foundation for Moral Law.

He has long been active in the anti-abortion movement and served 18 months in prison for blocking abortion clinics.

Wishnatsky told Al.com that he was raised in a Conservative Jewish home in New Jersey and had a bar mitzvah.

He has a doctorate in political science from Harvard and worked for a while as a stockbroker. Wishnatsky considers himself “a Jewish person who has accepted Christ.”

Jewish religious law considers all born Jews as Jews for life, although they are subject to excommunication if they convert. Israel’s Law of Return, which extends accelerated citizenship to ethnic Jews, excludes those who have converted to another religion.

Kayla Moore was responding to critical coverage of her husband’s suggestion that the liberal Jewish philanthropist George Soros was headed to hell because he had not accepted salvation. Her statement at a rally just before the election — which Moore lost narrowly — exacerbated the problem, with Jewish commentators saying she was playing to Jewish stereotypes.

Kayla Moore’s remarks at the rally suggested that she was referring to Jewish converts to Christianity.

“We have very close friends that are Jewish and are rabbis and we also fellowship with them,” she said. “Fellowship” used as a verb generally refers to Christians joining together.

There had been speculation that Kayla Moore had been referring to Richard Jaffe, a Birmingham attorney who had represented the Moores’ son, Caleb, on a drug charge. Jaffe said he was offended by the reference and that he backed Moore’s opponent, and the election victor, Doug Jones.