Oprah Winfrey probably would be a pro-Israel president 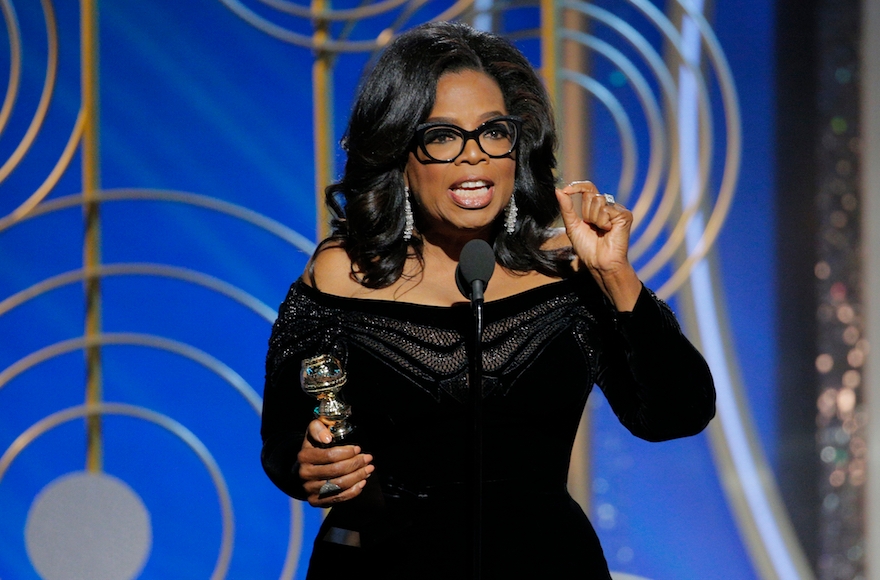 Oprah Winfrey giving a speech at the Golden Globe Awards that has made many predict that she could run for president in 2020. (Paul Drinkwater/NBCUniversal via Getty Images)
Advertisement

(JTA) — Because this is the world we live in, buzz is now building around Oprah Winfrey running for president in 2020.

Winfrey sparked the speculation with a speech at the Golden Globes in which she praised women who have come forward with stories of sexual abuse, declared that the “time is up” for abusive men and promised girls that “a new day is on the horizon.” She also spoke about the importance of a free press that “keeps us from turning a blind eye to corruption and to injustice. To — to tyrants and victims, and secrets and lies.”

It’s hard to say what policies the iconic talk show host would support as leader of the free world (would we all get a car?). But one thing we can expect: President Oprah Winfrey would probably be pro-Israel.

Winfrey has had a positive relationship with Jewish leaders and the Jewish state stretching back at least a decade. In 2007, she was honored by Holocaust survivor and Nobel laureate Elie Wiesel at a dinner for his foundation, and pledged to visit the Jewish state — though the trip doesn’t appear to have happened. Upon receiving the award, Ynet News reported, Winfrey expressed sympathy for Israel’s fight against terrorism.

More recently, Winfrey has rejected an overture from the Boycott, Divestment and Sanctions movement against Israel. In 2015, Winfrey wore diamonds from Israeli jeweler Lev Leviev on the cover of O, her monthly magazine. BDS activists came to the magazine’s office with a letter demanding Winfrey reject Leviev but were barred from entering.

What about Oprah and The Jews? Winfrey connected a few times with Wiesel. In 2006, she selected his groundbreaking memoir, “Night,” for her book club, pushing it back onto best-seller lists decades after its publication. That year, she filmed an extended segment with Wiesel on the grounds of Auschwitz, the former concentration camp.

After ending her talk show in 2012, Winfrey spent a day with Chabad touring the Hasidic outreach group’s neighborhood in Crown Heights, Brooklyn. She had a meal at a Chabad home, met with five women from the Hasidic group and visited a mikvah, or Jewish ritual bath. She told Motti Seligson, a Chabad spokesman, that she was impressed with Chabad’s emphasis on family life.

Winfrey also featured the story of a Hasidic Jewish boy from Hungary in 2015, when he was the breakout star of “Belief,” a seven-part documentary series exploring various faiths around the world that aired on OWN, her TV network. The show followed Mendel Hurwitz of Budapest as he prepared for his bar mitzvah. After the show, Winfrey tweeted that she “loved” his story.

I loved the Mendel story so much because it represents right of passasge. " bye bye to childhood".#Belief

Will that be enough to win her Florida in 2020? Only time will tell.