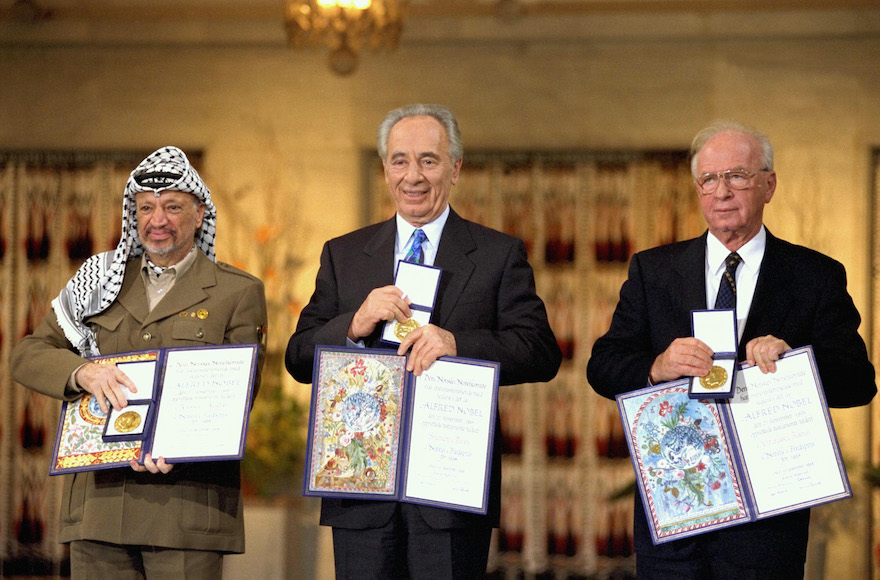 From left to right: Yasser Arafat, Shimon Peres and Yitzhak Rabin in 1994, after winning the Nobel Peace Prize for their roles in the Oslo Accords. (Wikimedia Commons)
Advertisement

Let me be clear: When discussing why the peace process has been stalled for so many years, one has to begin with the Palestinians. There is little evidence to suggest that the Palestinians have yet made the necessary qualitative leaps to accept the legitimacy of the Jewish state, to negotiate in good faith on the outstanding issues or to stop inciting its people to violence and instead prepare them for peace.

In past decades there were several occasions – the 1993 Oslo Agreement, the 2000 Camp David summit, and the 2007-08 Annapolis process – when it looked as though Palestinian leaders could be on the verge of accepting Israel in a serious and responsible way. Unfortunately, that hope foundered as former Palestinian leader Yassir Arafat and then Mahmoud Abbas refused to make serious, specific responses to significant Israeli peace proposals.

In sum, principal responsibility for the absence of peace rests with the Palestinian side, even while they do have some legitimate grievances and aspirations.

We at the Anti-Defamation League have long held that the two-state solution is important for the safety and survival of the Jewish people. And Israeli Prime Minister Benjamin Netanyahu himself has stated Israel’s commitment to such a solution.

However, the central committee of Prime Minister Netanyahu’s ruling party voted on Jan. 2 to demand “free construction and application of Israeli law and sovereignty in all liberated areas of settlement.” Doing so could make any potential Palestinian state unviable by annexing far-flung settlements to Israel that separate Palestinian population centers from each other.

This is something Israel, under both right- and left-wing governments for 50 years, has refrained from doing, in part for international legal reasons. Instead, Israel has maintained judiciously that the difficult situation on the West Bank is only a temporary one, albeit long-lasting, because of the absence of peace.

But that distinction was also blurred by a Dec. 31 directive from Israel’s attorney general, who under pressure from the country’s justice minister instructed government agencies to apply new civilian laws when possible to cover the West Bank as well as Israel proper.

Finally, Israel’s parliament voted on Jan. 2 to make it well-nigh impossible for Israel to give up any part of Jerusalem in peace negotiations. It raised the bar for Knesset approval of any peace agreement that would include ceding part of Jerusalem to a foreign entity from a majority to a supermajority of 80 of the body’s 120 votes.

The law itself might be reversed by a simple majority vote at a later date, but it also sends worrying signals about Israel’s long-term intentions. This was further exacerbated that same day by President Donald Trump’s ill-advised tweet stating “we have taken Jerusalem, the toughest part of the negotiation, off the table.”

That telegraphs the wrong message to Israelis and Palestinians, and it stands in direct contradiction to the president’s own historic speech on the matter. On Dec. 6, Trump recognized Jerusalem as the capital of Israel and specified that “we are not taking a position on any final status issues, including the specific boundaries of the Israeli sovereignty in Jerusalem.” He similarly confirmed that Jerusalem would remain “one of the most sensitive issues in those talks.”

ADL welcomed the president’s speech because Jerusalem has been the capital of Israel since its founding and the spiritual home of the Jewish people for millennia. But we also called on the parties to redouble their efforts to foster conditions necessary for an eventual two-state solution and to resume negotiations immediately.

Whatever one’s views on the particulars of any future peace agreement, however remote it may seem today, three priorities for Israel should be respected by all: Israel’s fundamental right to security; its need to maintain a substantial Jewish majority; and the need to protect and strengthen Israel’s democratic values and institutions. At the same time, it is essential that a final resolution also address the concerns of the Palestinian people and allow them to control their own destiny through some form of statehood. And we continue to believe that such a mutually beneficial outcome, one that delivers on the needs of all people, will be determined only through direct negotiations between the two parties as both sides make the tough choices that are required to achieve peace.

A two-state solution still offers the only hope to achieve all these goals. Security is possible with the right terms. A Jewish majority can be assured by separating from the Palestinians. And Israel’s democratic character and respect for civil rights depends upon its continued pursuit of the two-state solution. It is complicated and challenging, but it still must be the ultimate goal.